No More Testers For Target Korea
Targetware has announced that as of today, they will not be accepting any NEW Closed Beta Applications for Target Korea. They have received almost 1200 applications to participate on the Target Korea closed beta team and we would like to publicly thank everyone who has applied. Over the next few weeks, they will be reviewing ALL of the registered applications and aggressively adding large batches of players to the closed beta team to greatly enhance load testing capabilities. For those players who were not able to participate in the closed beta, it was stated that the current development timeline projects offering a general "Open Beta" for the community at large to participate in during the second half of 2001.

New Comanche 4 Screen
NovaLogic has announced the upcoming release of the fourth installment of the Comanche series, based on the U.S. Army's next generation armed reconnaissance helicopter - the RAH-66 by Boeing-Sikorsky. The helicopter's versatility in reconnaissance, ground attack and air combat roles will be emphasized in the game's all-new missions. Players will get to fly with the Comanche's signature low-altitude capabilities into real-world locations including urban settings and rural environments around the world such as tropical islands, desolate deserts and lush, tree-laden jungles. 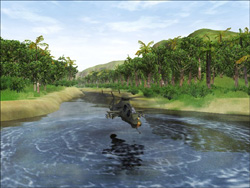 The game showcases new graphics, including realistic rotor wash effects both on the water and the ground. Comanche 4 will also feature a 3-D virtual cockpit and weapons of destruction including the 20mm cannon, 70 mm rockets, air-to-air and heat-seeking AIM-9 Stingers and the laser-guided AGM-114 Hellfire missile. Players will also have to dodge fire from ground troops wielding hand-held Stingers. Multiplayer action is planned on NovaWorld, with up to 32 players fighting it out online.Comanche 4, slated for release in late 2001.

New Medal Of Honor Screens
Electronic Arts has released a new group of screenshots from Medal of Honor: Allied Assault, its upcoming World War II first-person shooter. The new screens show more of the game's Normandy invasion level, and they include views of several characters who will appear in the game. In addition, a realistic explosion can be seen in one of the shots.

Set during the most trying years of WWII, 1942-1945, MOH Allied Assault imparts a sense of the courage it took to survive the landings at Normandy, the assault at Arzew, a rendezvous with the Resistance outside the village of St. Lo, and the push through the heavily defended border of Germany to take the bridge at Remagen.

UBI SOFT Surpasses Predicted Sales
UBI SOFT has surpassed its predicted sales growth of 25 percent for the 12-month fiscal period ended March 31, 2001. The group reported net consolidated sales of 236 million USD, up 39 percent over the prior annual period. Still, its net income during the period decreased to 4.2 million USD because of sluggish sales of new consoles. The company also had to absorb the cost of the companys key acquisitions made during fiscal year 2000-2001. UBI SOFT said that it anticipates a 35-40 percent increase in sales and a net profit margin of 4-5 percent for 2001-2002. The game creator has 160 titles in development, 70 of which are for new platforms. With a growth rate that exceeds that of the video games world market, Ubi Soft is well on its way toward reaching its goal of 1.5 billion dollars in revenues by the year 2005/2006. 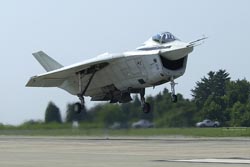 In four separate flights, the X-32B demonstrated rock-solid stability at various altitudes and at all airspeeds down to 90 knots on landing and 80 knots during the flight. On each flight, the X-32B performed transitions from conventional, wing-borne flight to jet-borne, direct-lift flight and back to wing-borne flight. The aircraft demonstrated Short Takeoff and Vertical Landing (STOVL) flying qualities down to 80 knots on the direct-lift system during the fourth flight of the day. On 9 of the 11 flights of the past three days, the flight was culminated with a "slow" landing using direct lift. The aircraft is expected to reduce forward speed progressively over the next several flights, demonstrating hover flying qualities and vertical landing performance within the next several flights. Successful demonstrations of short takeoff, hover and vertical landing will complete the customer requirements for the Boeing JSF flight test program. (Boeing Photo) 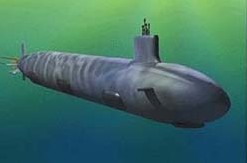 The contract modification provides funding for ongoing design-yard services in support of the baseline Virginia (SSN-774) design, and technology insertion and upgrades for the follow-on ships of the class. The modification also provides for design-yard support for construction of the planned 30 Virginia-class ships.

These submarines will provide the US Navy with the capabilities it requires to maintain the nation's undersea superiority well into the 21st century. Currently, Electric Boat and its construction teammate, Newport News Shipbuilding, are working on a $4.2 billion contract to build the first four ships of the class. Electric Boat will deliver the first ship, Virginia, in 2004.

NASA's All-Terrain Vehicle For Exploring Titan
Engineers are constantly planning for the future. In space exploration, this means coming up with innovative and energy-efficient ways to study harsh but scientifically interesting environments that are millions or billions of miles from Earth. The Aerover Blimp is one concept JPL engineers are considering--in this case, for a proposed future visit to Titan, one of Saturn's moons.

The Aerover is a small helium-filled blimp that can be steered and moved up and down within the atmosphere to explore different altitudes. Three propellers are likely to be used to allow this manoeuvring.

The ability of this blimp to move and be repositioned allows for its use as a mobile aerial platform to carry instruments that take readings from different locations, and even follow up on interesting features. Landing is accomplished with an inflatable wheel on the bottom of the blimp, which can cushion a landing on ice, rocks or other surfaces. The blimp will also provide flotation on potential liquid methane oceans, thus making the Aerover the ultimate all-terrain-vehicle. The Aerover will likely have the ability to fly along at 10 kilometres altitude (about 6 miles), circumnavigating the moon every one or two weeks and providing imaging and science well below the upper opaque clouds that prevent viewing from Earth or from orbit.

The proposed helium-filled blimp could have a fabric outer surface with an inner balloon containing helium. Helium is used because it is the second lightest element, and is inert, eliminating the danger of fire or explosion before and during launch from Earth. Overall size may be about 10 meters (33 feet) in length and 2.5 meters (8 feet) in diameter - roughly the length and height of a stretch limousine. Overall weight may be about 100 kilograms (220 pounds).

Titan is of great interest to scientists because observations have indicated the presence of a rich organic atmosphere, which helps create the building blocks of complex organic compounds. This leads scientists to speculate that present-day conditions on Saturn's moon may be similar to those on Earth billions of years before life emerged here.

Our first close-up look at Titan will be when the Cassini spacecraft arrives in the Saturn system in 2004. The spacecraft will deploy the Huygens probe to study Titan, gathering data that may lead to a mission after 2010, with the possible use of the Aerover Blimp for further exploration.

American Blimp Corporation is studying various designs of an experimental blimp for JPL's exploration of Titan.

The test was the ninth successful static firing of the two-pulse TSRM, which was designed, developed, and fabricated by ATK Missile Products Company, Elkton Operations, Elkton, Md. The static tests at AFRL are used to verify performance of the TSRM at altitude. This most recent test demonstrated a revised instrumentation package that will be used on upcoming flight tests.

The SM-3 and the AEGIS Weapon System comprise the Navy Theatre Wide ballistic missile defence system. SM-3 is designed to intercept an incoming ballistic missile outside the earth's atmosphere. Elkton Operations developed the TSRM under a multi-year contract with Raytheon Company, the Navy's prime contractor for the SM-3 program, and recently received an Excellence Award from the Navy for its outstanding contributions to the program.

In January, the SM-3 completed a successful flight test at the Pacific Missile Range Facility in Kauai, Hawaii. The test, which demonstrated the system's airframe stability and control through a nominal kinetic warhead separation, included successful operation of the TSRM. The flight from the US Navy Aegis Cruiser USS Lake Erie (CG 70) was the third in a planned series of nine test flights under the Navy's Aegis LEAP Intercept (ALI) program.