Real War Demo
Simon & Schuster Interactive has released a playable demo for its upcoming real-time strategy game, "Real War". Originally developed to train the United States military, "Real War", is a Real Time Strategy (RTS) game, players choose between U.S.A. or a rogue army called The ILA (Independent Liberation Army). and each side includes 12 scenarios and around 40 hours of gameplay. The game features more than 50 different types of real-life units, including infantry, armored vehicles such as the M1A1 and the T80, nuclear submarines, and aircraft such as the F16 and the B52. Release Date: August 2001. Click here and download the demo.

Lock On: Modern Air Combat Release Update
During our E3 reports we told you that "Lock On: Modern Air Combat" (LOMAC), along with "IL-2 Sturmovik", were slated for release Q3, 2001. Staggering the release of the two most highly anticipated combat simulations, Ubi Soft has pushed back the release of LOMAC to February 2002. We were told this will allow for more time to work on LOMAC, which should make the fans happy.

Lock ON: Modern Air Combat combines a broad scope of game play that includes a dynamic battle generator, an immersive combat environment, robust multi-player options, and in-your-face action. Players can choose from eight U.S. and Russian jets that range from tank killing A-10 Warthogs and ground- pounding Su-25 Frogfoots to air superiority fighters like the F-15C Eagle and the Su-27 Flanker.

What is the story with Harpoon 4?
Great news for naval fans! With the on-again, off-again rumors about Harpoon 4, COMBATSIM has learned that Harpoon 4 is still in development and slated to be released February 2002. Reports of its demise were greatly exaggerated, according to a Ubi Soft press agent, Harpoon 4 was never canceled, nor was its future in jeopardy.

Battlefront.com Enters Global Partnership
Battlefront.com, the online wargaming publisher, has formed a partnership with Net4war, a French based military content website that will provide local sales and support services to Battlefront.com customers in European, African, and Arabian countries. Battlefront.com's partnership with Net4war will allow customers to order Battlefront.com products from Net4war and have them shipped to them from within the European Union. Customer, technical, and gaming community support will initially be offered in French, with English and additional languages added in the coming months. Net4war will aid Battlefront.com in localizing its products into non-English languages. The first conversion will be to make a French language game and manual for Combat Mission- Beyond Overlord. The French version is slated to ship later this summer.

Stop The Clock On WWII Online
Playnet.com, Cornered Rat Software and Strategy First announced today that they will be stopping the clocks on the free 30 day trial period they are giving players that have purchased a retail copy of World War II Online. Strategy First and Playnet.com will make an announcement to inform players of when the 30 day trial period will commence again. Until that time, players will not suffer any loss of free online play.

Were working to catch up with the overwhelming response to the games release and having to scale our infrastructure to address it. Until we are able solve some of these challenges, we want people to be able to experience the game without losing days from their free trial period, says Al Corey, Marketing Manager for Playnet.com.

World War II Online Offline
Strategy First has released a statement concerning the recent launch of World War II Online. According to the company, initial game sales far exceeded expectations, with almost a third of the total projected sales reached on the first day of release. As a result, the Playnet servers are temporarily affected and the company is in the process of trying to accommodate the amount of traffic trying to register for their free trial month. This is NOT a software related problem. Rather it is a hardware issue, according to Christina Ginger of Strategy First.

Did the developers underestimate the huge load that would hit their servers when the game was released? According to Jim Mesteller, the CEO of Playnet, the team thought they had everything properly planned out before launch, and that Playnet had been working with several partners on the project. The primary problem was that a group of brand-new switches had a compatibility issue with the operating system of the Playnet servers. The development team has been working on the problems all night long and plans to relaunch the servers at 6:00pm CT today, which should fix most of the switch compatibility issues. The one server that has been running can only handle 600 players. This is a far cry from the 20,000 trying to get online.

Cornered Rat has also released a 67mb patch which is required to run the game. The patch contains new terrain, vehicles, and weapons. Click here for download information.

Strategy First has set up a forum that will post official news and updates on the progress of the situation from members of the development team. 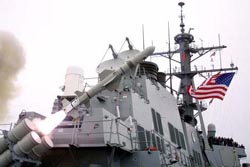 The missile was launched from the USS Decatur (DDG-73), an Arleigh Burke-class guided missile destroyer. The test demonstrated the Harpoon Block II weapon system's open-ocean ability to select the proper target using the Navy's Mobile Sea Target and another target ship, the MK-35 SEPTAR. The missile tracked and acquired the target exactly as planned. Flight tests later this summer will demonstrate the missile's other capabilities.

Harpoon Block II is an upgraded version of the world's most successful anti-ship missile, which is in service with the armed forces of 26 countries. Block II improves strike capabilities in congested littoral environments and adds the ability to attack land-based coastal targets.

The accurate navigation solution provided by the new components allows the Harpoon Block II to discriminate target ships from islands, other obstructions or neutral ships.

The multi-mission Block II missile can be deployed from all current Harpoon missile system platforms with either existing command and launch equipment or the new Advanced Harpoon Weapon Control System. 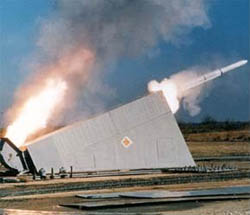 The ESSM, built by Raytheon as part of an international consortium, will improve the capability of U.S. and international ships to defend against advanced supersonic, anti-ship cruise missiles. This test, designated ESSM Aegis S-band #1 (SB-1), was the first of four planned demonstrations at WSMR that will validate the capability of the Aegis version of the ESSM prior to the first shipboard demonstration in June 2002.

The ESSM is being integrated by Lockheed Martin into the U.S. Navy's Aegis Weapon System Baseline 6 Phase III ships. This Aegis baseline brings improvements in ship self-defense as well as Area Theater Ballistic Missile Defense (TBMD) capability to the fleet.

The Aegis version of the ESSM is guided by the SPY-1 family of phased array radar systems developed and produced by Lockheed Martin NE&SS-Surface Systems. The S-band missile version will be deployed in many ships and forms the basis for a robust and reliable ship self-defense capability.

"This test marks a key milestone for navies around the world," said Mark Gaspar, director, International Programs at NE&SS-Surface Systems. "The missile will be guided by the family of AN/SPY-1 radar systems including those of the U.S. Navy's Aegis destroyers, Spanish F-100 class of frigates and the recently contracted Norwegian Frigate utilizing the SPY-1F radar system. Today's demonstration retired major technical risks associated with deployment of the S-band guided ESSM missile. This system represents the future of ship self-defense and is available for a wide range of surface combatants." 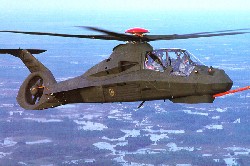 "Our first T-801 flight was successful in every respect," said Chuck Allen, vice president and director, Boeing Sikorsky Joint Program Office. "We completed all scheduled events, covering a variety of maneuvers and airspeeds up to 120 knots. And, we have recently completed additional flights to expand the performance envelope." 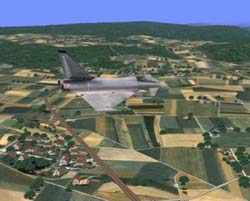 "This is a record achievement for CAE and establishes the Medallion image generator as the clear choice for high performance fast jet training applications," said Derek H. Burney, CAE's President and CEO. "CAE's participation in ASTA, one of the largest programmes on the horizon, will strengthen the company's position in the military simulation market for follow- on business created by future Eurofighter sales," he added.

CAE will design, develop, produce, install and support complete visual systems for 27 simulation devices including Full Mission Simulators (FMS), Cockpit Trainers/Interactive Pilot Stations (CT/IPS) as well as other ancillary devices. FMS will duplicate all aspects of high- speed tactical jet mission flight. CT/IPS will be used to introduce pilots to the cockpit environment. Devices will be electronically linked to provide multi-aircraft mission training. The contract will extend over several years, with the first deliveries expected to take place in 2002.

For the ASTA program, CAE is teamed with Sogitec Industries of France. The visual system will include a new Medallion- X image generator developed jointly by CAE and Sogitec. The Medallion-X image generator combines the sharp imagery necessary for advanced tactical training with comprehensive sensor simulation such as FLIR (Forward Looking Infrared) and Night Vision Goggles.