Targetware Unveils "Aircraft" Section
Targetware unveiled a new "Aircraft" section on their home page today. This section is dedicated to the various certified aircraft that players will be able to fly in the upcoming title "Target Korea". This new section also includes authentic extracts from real pilot manuals for these aircraft, in-game pictures, and color energy diagrams. Click here.

Interplay Up For Sale
Interplay announced that it is engaged in discussions with a third party concerning the acquisition of the company, but that no binding or definitive agreement had been reached and there can be no assurance that an agreement will be reached. The company further noted that price discussions to date reflected a modest premium to the holders of common stock from the average trading price over the last 20 trading days

Click here for last Friday's development update. Oleg has posted screenshots of the La-5FN and Me-262 cockpit.

U.S., China Agree on Spy Plane Return
China and the United States have struck a deal on the return of the crippled U.S. spy plane. Under the agreement, the U.S. Navy EP-3 reconnaissance plane would be flown out in pieces aboard a giant Russian-designed Antonov-124 cargo plane.

"The two sides have agreed in principle that an AN-124 aircraft can be used to return the EP-3 aircraft from Lingshui airfield," said a U.S. official, speaking on condition of anonymity. "Details of the operation remain under discussion."

In China, the official Xinhua news agency quoted Chinese Foreign Ministry spokesman Zhu Bangzao as confirming an agreement had been reached to "take home the EP-3 in parts."

A team of five civilian technicians from Lockheed Martin Corp., maker of the EP-3, inspected it earlier this month and said it could be repaired sufficiently to be flown off Hainan.

But Beijing said allowing that would be a national humiliation. Making the United States take the plane apart for a long and expensive journey home could help China's leaders appease a nationalistic public outraged by the incident.

Chinese technicians have already scoured the $80 million aircraft for any secrets that the 24-member U.S. crew failed to destroy during the hair-raising minutes before they landed the plane with a mangled propeller and nose cone ripped off. 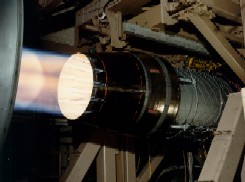 The "Robust AMT," performed at the request of senior Air Force propulsion officials, rigorously tested an improved Pratt & Whitney F100-PW-229 engine to the most demanding mission conditions currently encountered by the USAF. "This was the first test of this type," said Mr. Otha Davenport, Director of Engineering for the Propulsion Product Group and Chief Engineer for USAF Propulsion. "The intent of the test was to expose the engine to the most extreme conditions that the fleet could see in real life. We really focused on uncovering potential new failure modes and demonstrating design margin to tolerate operational mission changes".

The engine that was tested included durability improvements designed to improve flight safety, reduce operational maintenance, and increase the "time-on-wing." During the Robust AMT, it was exposed to 450 hours of hot time, which is time spent at military power and above; the original specification calls for 231 hours. The test also exposed the engine to 85 hours at maximum power, which is 350% higher than the original requirements, and over 14,000 augmentor lights, which are four times the original requirements. Additional measures ensured that worst case field experience was demonstrated. All of the major rotating systems, including the power take off system, were run with maximum allowable field vibration levels. Horsepower extraction, heated fuel, and aircraft bleed interfaces were configured to simulate the demanding F-15E mission. High cycle fatigue stairstep testing was conducted at sub-ambient, sea level, and altitude conditions. Also, intentional high power stalls were conducted periodically to demonstrate stall margin retention.

"We were very pleased with the performance of the F100-PW-229 propulsion system during this test," said Mr. Davenport. "We tested the engine to extremes, and it responded by demonstrating outstanding durability. It is a testament to the robust improvements introduced into the F100-PW-229 by the Component Improvement Program."

The Robust AMT was designed under the guidance of the propulsion Executive Independent Review Team (EIRT), a team of propulsion experts from industry, government and academia, to validate the latest durability improvements made to the F100-PW-229 engine. It was run at the new propulsion test facility at AEDC, Arnold AFB, Tennessee, which is capable of running simulated sea level and altitude conditions in the same test cell.

The engine is currently being disassembled for a complete Analytical Condition Inspection. This inspection will identify any other areas that the Propulsion DSO may want to will focus on in order to take the system to an even greater level of reliability. 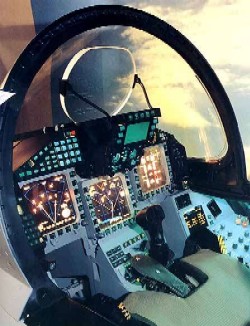 The processor derives from Radstone's successful VMEbus PowerPC family, already in service in a variety of U.S. and European defence applications and will be among the first 'Commercial-off-the shelf' (COTS) computer modules to be integrated into Tranche 1 of the Eurofighter production programme.

Radstone will replace an existing General Purpose Processor (GPP) based on Motorola 68020 technology. A total of five processors will be used in each DASS unit and the first production versions are due to be delivered in October 2001.The new GPP is consistent with Eurofighter's common processing module requirement.

Peter York, Eurofighter DASS Project Manager, BAE SYSTEMS, commented:"Radstone's PowerPC technology has enabled us rapidly to take advantage of some significant advances in processor performance and packaging technology. With their close co-operation and expertise we have been able to integrate leading-edge silicon into the Eurofighter programme within a very demanding timetable."

Commenting on the win, Radstone Group Managing Director, Charles Paterson, said: "This is an important and prestigious contract for Radstone and one which holds out substantial future production potential."

Eurofighter is being developed by Alenia Aerospazio of Italy, British Aerospace, CASA of Spain and Germany's Daimler-Chrysler Aerospace. An overall production contract for 620 Eurofighter aircraft was signed in January 1998.Production of the first of these is now in progress, with a planned delivery date to the four participating partners in 2002.Production will be carried out in three tranches between 2001 and 2014.

Known as the NMCI OCONUS (Outside the Continental United States) program, the assignment includes the design, installation, integration and testing of internal and external telecommunications infrastructure to support all of the communications needs  voice, video and data  of land-based Navy personnel worldwide. The program will support more than 35,000 users.

Program implementation will mirror the Navys domestic NMCI program, as it relates to design, equipment vendors, interoperability and overall methodology, with the intention of moving toward seat-managed services.

"General Dynamics is a strong proponent of the Navys vision of a global enterprise network," said Dan Allen, a vice president and general manager for General Dynamics Worldwide Telecommunication Systems. "By developing reliable and cost-effective network infrastructure for our clients, we take their mind off the network technologies and enable them to focus on their business  carrying out effective military operations."