PC News Star Trek Starfleet Command III at E3
Published by Activision, Starfleet Command III is the first in the series to take place in the Star Trek: The Next Generation timeline and combines tactical combat of the previous titles with a improved interface, multiplayer campaign and graphics. Star Trek Starfleet Command III offers players virtuall control of all ships systems and crew members. As in the movies and television series, players can balance resources between different ships systems such as shields and weapons and employ cloaking, tractor beams and shuttles to optimize their tactical opportunities. Players can also customize their ship with a myriad of weapons, shields, sensors and other systems and recruit new crew members with enhanced skills and abilities. Star Trek Starfleet Command III also includes an enhanced version of the Dynaverse 3 multiplayer environment. This persistent online component will feature improved AI and a new system that allows players to join the same fleet, travel together across the map and battle alongside one another in defense of their race's homeland.

Strategic Command Demo
Battlefront.com and developer Fury Software have announced the beta demo for Strategic Command  European Theater, a turn-based Grand Strategy wargame featuring the Second World War in Europe. As the supreme commander of the Axis or Allied forces, the player shapes the fates of the nations at war in Strategic Command. Political options, research and upgrade of equipment, management of supply and resources and the strategic employment of one's armed forces are some of the keys to success. The full featured beta demo contains one major campaign: "Fall Gelb" - the German invasion of France and the Low Countries and includes multiplayer support via Play by Email (PBEM). Gameplay in the demo is limited to one full game year (May 1940 - May 1941). The final version will include a total of six major campaigns as well as a powerful campaign editor. Strategic Command is in late Beta, and is scheduled for release this summer.Download

U.S Army Licenses Unreal Engine For PC Game
Epic Games announced that its industry-leading 'Unreal Engine*', has been licensed by the U.S. Army to power the revolutionary America's Army PC game. The game and game details will be revealed to the computer and video games industry at the upcoming E3 this week in Los Angeles.

"Our selection of the next generation Unreal Engine was the most important decision we made when charting our development path for 'America's Army'. The Unreal engine has allowed us push our graphics and realism beyond the state-of-the-art," said LTC Casey Wardynski, originator of the "America's Army" concept and manager of the development program. 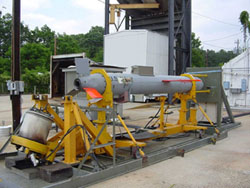 Scheduled for fleet introduction in 2004, the Tactical Tomahawk (identified as the Block IV) will cost less than half of a newly built Block III missile and will have the capability to be flexed in flight to a new target and to be placed in a loiter awaiting a call-for-fire mission. The missile also will have the capability to transmit battle damage assessment imagery.

The goal of the joint DARPA/Navy UCAV-N program is to demonstrate the technical feasibility for an unmanned system to effectively and affordably conduct sea-based surveillance, strike and suppression of enemy air defense missions within the emerging global command and control architecture. 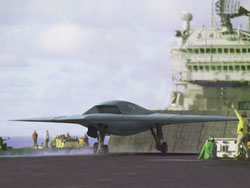 Under the $10 million contract modification, which runs until Sept. 30, 2004, Northrop Grumman will conduct additional technology and risk-reduction studies, including modeling and simulation of autonomous flight operations from an aircraft carrier.

In addition, the company has invested its own funds in the X-47A Pegasus, an experimental unmanned vehicle system that will demonstrate aerodynamic qualities suitable for autonomous aircraft carrier flight operations. Results of the Pegasus flight demonstrations later this year will be used in the UCAV-N program.

AeroGroup Files For Patents On "The Uses of Tactical Aircraft"
Editors Note: I didn't know you could patent such a thing....

AeroGroup believes that the patents, once in effect, will result in revenue from companies currently offering combat air support services utilizing these aircraft, as well as future companies who enter the market.

Light Anti-Armour Weapon for British Army
The UK Government announced today that a team, led by Saab Bofors Dynamics AB of Sweden, called Team MBT LAW, has been selected to provide the British Army's Next Generation Light Anti-Armour Weapon (NLAW) valued at around $400 million. This announcement will mean considerable work coming to Raytheon Systems Limited (RSL)'s Glenrothes facility and will result in an additional 32 jobs. 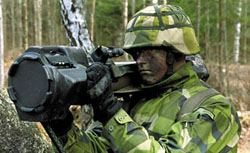 NLAW is a man-portable, shoulder launched anti-armour weapon. It features Fire and Forget capability and is powerful enough to destroy Main Battle Tanks. The programme calls for many thousands of units to be supplied to the British Army and in addition the weapon has considerable export potential. As a result the programme is likely to run for some 10 to 20 years, creating or sustaining a significant number of high quality, long term jobs in the UK.

Eurofighter IPA1 Completes Successful Flight Tests
IPA1, the first production standard Eurofighter, has successfully completed five flights in the ten days since its maiden flight. The flights form part of the intensive test programme currently taking place on the Eurofighter project. All of IPA1's flights have been utilised for Production Flight Acceptance Testing, air data testing or testing of the production stick top.

The turnaround between flights has been achieved in as little as 45 minutes. Over this period of flight tests there have only been two minor snags, which is testament to the production processes that have been developed across the programme and in particular in the assembly areas at BAE Systems. 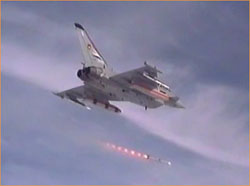 IPA1's fifth flight represented the first occasion on which UK customers have successfully flown the aircraft. The flight, which tested the production standard control stick, was conducted by Flight Lieutenant Will Jonas as pilot with Squadron Leader Brian Kemp in the rear seat, both are RAF test pilots working for the Aircraft Test and Evaluation Centre (ATEC) with QinetiQ.

After flying the aircraft Flt Lt Will Jonas said: "To get the chance to fly IPA1 at such an early stage in its life was a great thrill. The aircraft was a joy to fly, extremely pilot friendly, and I'm already looking forward to my next sortie."

"The aircraft has performed exceptionally and in doing so has proved the production processes we have developed for the programme," said Ross Bradley, Managing Director Eurofighter Typhoon. "It is a remarkable feat that we have built and flown the first production standard Eurofighter in less time than the last Tornado."

The aircraft is now on lay-up, which will see IPA1 undergo upgrading of some avionics equipment, installation of a flight refuelling probe and completion of work on the flight test instrumentation. It will then undergo ground resonance, electro-magnetic compatibility and Stage-B testing.

Residents of Singapore got their first look at the Apache Longbow two years ago, when the Apache performed at the Asian Aerospace exhibition. 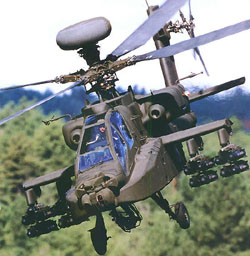 The versatile multirole helicopter has performed aerobatic maneuvers which demonstrate its agility in flight - at air shows around the world. The performances include a series of hammerhead stalls, split-S maneuvers, and loops and rolls at typical combat weights. The U.S. Army and defense forces from nine nations fly or have ordered AH-64A or AH-64D Apaches.

The AH-64D offers the most modern technology of any attack helicopter in the world. It distills a wide range of avionics, electronics and weapons into one fully integrated weapon system. Analyses show the Apache Longbow is 28 times more capable than its predecessor, the AH-64A Apache - long considered the world's best combat helicopter.