PC News IL-2 Sturmovik Patch v1.0.4b Released
Ubi Soft has announced that the Interim Patch 1.0.4b for IL-2 Sturmovik is now available. There is one file to download and upzip into your IL-2 Sturmovik installation directory: il2patch_104b.exe - Approx. 11.3 MB in size. For the full list of features for this patch please read the notes in the game updates page. NOTE: The self extracting archives extract to the default IL-2 install directory. If you chose a custom directory you will have to input that information in when prompted to. Download

Sudden Strike II Complete
CDV Software has announced that Sudden Strike II, its latest World War II real-time strategy game, has gone gold. The game is the follow-up to Sudden Strike, which was released in early 2001. The new game will let players command the Russian, British, American, German, or Japanese forces during World War II. Each side will have realistically modeled vehicles and troops. The North American version of the game is scheduled for release in August. In addition, the new game will feature a more realistic damage modeling system and a complete level editor, as seen in these screenshots. 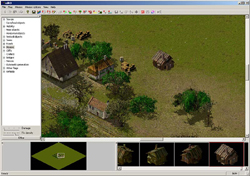 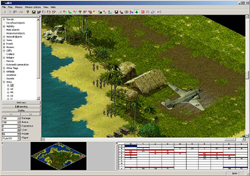 Matrix and 2 by 3 Games Host Live Chat
Matrix Games has announced a moderated live chat with Gary Grigsby, Joel Billings of 2 by 3 Games and Mike Wood of Matrix Games. Representing the Uncommon Valor team, they will be taking questions about this South Pacific wargame, due to be shipped this May. The chat will take place this Wednesday, May 8th at 9:00 PM EST (New York Time) on the Matrix Games Website.

Uncommon Valor models the full scope of land, air and sea battles in the South Pacific from mid 1942 through the end of 1943. The beautifully rendered game map stretches from Truk in the north to Brisbane in the south. Ships, squadrons and regiments are detailed down to each gun, each pilot and each squad, respectively. While Uncommon Valor showcases a new level of historical accuracy, the interface is designed to minimize micro-management for casual gamers while allowing grognards to delve into the details. Uncommon Valor includes eighteen scenarios and campaigns, which can be played against the computer opponent, hot-seat against another human, or by a secure play by e-mail system. A scenario and unit editor is included to allow players to edit and create their own historical scenarios.

Military News US Army Restricts Black Hawk Flights
Hundreds of US Army Black Hawk helicopters were grounded except for mission-essential flights on 1 May after a potential transmission problem was discovered in one. Approximately 960 Black Hawks in both the active Army and National Guard have been restricted, officials said, as the Army conducts an assessment to see if the problem is isolated or if other Black Hawks have a similar problem. Under the restriction, only mission-essential flights such as medical evacuation and combat are allowed.

The restriction involves the UH-60A utility helicopter, EH-60A electronic warfare version and the UH-60Q medivac chopper. The UH-60L helicopters were not affected because they have a different transmission.

The transmission problem was detected when an Army aviation unit, the 57th Medical Company, at Fort Bragg in North Carolina experienced persistent low oil pressure problems with the transmission of one of its UH-60A Black Hawks.

The transmission was sent to Corpus Christi Army Depot, Texas, for repair. The part was disassembled and a cracked planetary carrier was determined as the reason for the low oil pressure. The planetary carrier, manufactured by RAF Industries, is a large plate-shaped component within the transmission that has no finite replacement life. 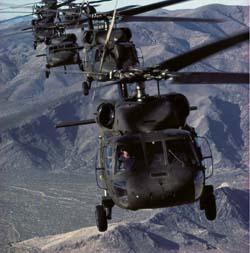 The Army Aviation and Missile Command, Corpus Christi Army Depot and Sikorsky, the designer of the aircraft, are investigating to find out the possible cause of the cracked carrier, officials said.

"The Black Hawk has a great performance record, and this is the first cracked planetary carrier found in 3.5 million flight hours," said Bob Hunt, Army Aviation and Missile Command spokesperson. "The Army Aviation and Missile Command, Corpus Christi Army Depot and Sikorsky are working vigorously to solve this issue. A lot of people are putting in a lot of hours to get to the bottom of this."

When the part doesn't function, it can't transfer engine power to the main rotor system. The rotor system could continue to operate without power allowing an autorotation landing or the failed carrier could cause a jam causing the rotor system not to work.

But Hunt said the restriction shouldn't affect Army readiness. More than 500 L series Black Hawk helicopters will be used until the Army can resolve the problem. The restrictions will also not stop Black Hawks in Afghanistan from flying combat missions, Hunt said.

There have been no Black Hawk accidents in the past because of a planetary carrier crack or failure, Hunt said. There also haven't been any major problems with the Black Hawks in years, he said. The last major maintenance problem occurred in the late 1980s when there was a problem with the aircraft stabilator.

Hunt said an update concerning the restriction will be issued within the next seven to 10 days.

TRW Signs Confidentiality Agreement With Northrop Grumman
TRW Inc.today announced that as part of its review of strategic alternatives, it has signed a confidentiality agreement with Northrop Grumman Corporation who, along with other interested parties, will begin receiving non-public information shortly. Terms of the agreement were not disclosed.

Philip A. Odeen, chairman of TRW stated, "We are pleased that we have reached a mutually acceptable agreement with Northrop and that it has chosen to participate in the process our Board has established to deliver to TRW shareholders the value they deserve. The focus of our Board has been on enhancing shareholder value and this will not change. In addition to exploring strategic alternatives, we are continuing to move forward with our Value Enhancement Plan. We are confident that each of these avenues can deliver value to TRW shareholders in excess of Northrop's $53* per share offer."

TRW provides advanced-technology products and services for the aerospace, systems, and automotive markets.

US Army To Investigate Crusader Lobbying
US Army Secretary Thomas White has asked the Army inspector general to look into possible inappropriate behaviour by service officials in connection with the Crusader artillery system program, Pentagon spokeswoman Victoria Clarke said on Friday at a briefing.

The Army has spent $2 billion on the Crusader to date. It would take another $9 billion to complete the program. Critics maintain the Crusader is too big and heavy for the lighter, more mobile Army of the future.

"There are some Crusader-like technologies that evidently show a lot of promise," she said. It's become apparent to DoD officials that proceeding with the Crusader could delay or prevent funding promising technologies that could benefit all services, she said.

Defence officials intend to make sure the department gets maximum value for taxpayers' hard-earned dollars, she said. "Very often when we talk about transformation, we're talking about equipment or the way we're organised, or the way we train, but it is also about bringing the financial management systems into the 21st century." 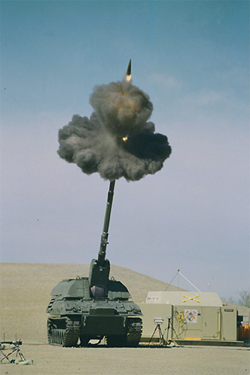 Deputy Defense Secretary Paul Wolfowitz asked White to come back within 30 days with a plan that assumes the Crusader is cancelled and invests the freed $9 billion in other, more transformational, technologies, Clarke said.

"Sometime after the deputy met with Secretary White and communicated what we would like to have happen," she said, "there were people making comments; there were talking points and fact sheets being sent around that did not support that direction. I'll just leave it at that.

"Around here," she noted, "when an issue is under discussion or under review, we fully expect people to speak out forcefully, to speak out smartly, to make their case. But when a decision has been reached, the expectations are that you will support that."

Clarke said it's up to the IG to determine what happened: "Who talked to whom? Who did what? Those are the kinds of things I'm sure the IG will look into." She said Defense Secretary Donald H. Rumsfeld is confident that White and the IG will get to the bottom of any inappropriate behaviour.

"We're also confident that anyone who may be responsible for inappropriate behaviour will be held accountable," she concluded.