IL-2 V1.04 Patch Update
Carl Norman, Ubi Soft Executive Producer, has announced that the IL-2 Sturmovik V1.04 patch is being QA tested for problems and verifying that all new features and bug fixes have been implemented properly. The V1.04 patch is expected to be released the week of April 11th. Click here for further details.

Fighter Ace III Goes Gold
VR1 Entertainment on Monday announced the release of Fighter Ace III. Players engage in World War II online aerial combat with a choice of 80 warplanes, five world powers, and the capacity for up to 250 players to battle it out in each arena. FighterAce III is available for download or can be ordered on CD. Subscriptions cost $9.95 per month or $49.95 for six months of play.

In addition to an improved terrain and graphics engine, full squadron support and an enhanced interface, Fighter Ace III provides more than 20 new aircraft types, including the Me262 jet fighter. Historical arenas like Guadalcanal, North Africa and the Battle of Britain have been added to Fighter Ace's combat scenarios. Fighter Ace III also supplies aircraft carriers and transport ships that enhance Pacific-style island-hopping campaigns, and trains and tank columns to provide targets on the ground. 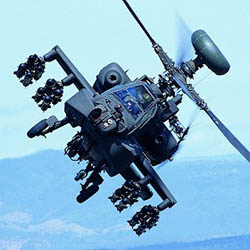 "Uninterrupted delivery of these milestone Apache Longbows to our number one customer continues to demonstrate our ongoing commitment to equip the U.S. Army with the finest multi-role helicopter in the world," said Al Winn, vice president of Apache programs. "Apache helicopters continue to play a key role in global defense."

Boeing has delivered more than 1,000 Apaches to customers around the world, with plans to deliver 1,000 more to customers worldwide through the end of the decade.

Apache Longbow fulfills a wide range of reconnaissance and combat missions, most without the need to reconfigure ordnance loads and electronic systems between missions.

Fairchild Dornier Forced To File For Insolvency
After months of financial problems, Fairchild Dornier has become the latest firm in the aerospace industry to file for insolvency, although it will continue its search to find a financial partner. The joint US-German company, which is the third largest regional manufacturer in the world, has debts well in excess of $600 million, and can no longer afford to pay its 3600 employees in Germany or the 700 in the US.

The company had been attempting to negotiate a rescue agreement that included a hefty loan from the German government but with no other strategic partner secured, the deal did not materialise within the agreed legal timeframe. "We are continuing to pursue a strategic partner and continuing our discussions with financial institutions to pursue a recapitalisation," said Fairchild Dornier CEO Lou Harrington.

Fairchild Dornier have blamed the financial crisis on a series of setbacks that have ensued since the catastrophic events September 11. The resultant economic slowdown and the chaos in the aerospace industry led to airlines cancelling or deferring new aircraft orders, and the company was forced to award financial settlements to customers when the plug was pulled on the 428JET programme. Another blow came when the Chinese government failed to grant import licenses for 21 328JETs ordered by Hainan Airlines.

The company is now reliant on the order book that it has for the new 70 seat 728-passenger jet to attract some financial backing. The project has already cost over $1 billion developing the project and Fairchild Dornier currently has firm orders totalling 125 with signed options for an additional 164. However, it is unclear what the current situation is with regard to launch customer Lufthansa CityLine, which holds 60 firm orders, and CSA Czech Airlines, which expect to receive its first deliveries in the third quarter of 2003, months behind the original timetable.

Harrington remains upbeat about the benefits the company can offer to any potential investor. "We have a very competitive product in the 728, in which we and our partners already invested two years and $1 billion. The 328JET is well established and doing well in operations around the world. The marketplace is the fastest growing sector in the aviation industry. We have an $11.7 billion order book, half of which is firm."

The MCWL test of the French-made system was to determine the feasibility of developing a similar version for the Corps, and to help refine what the requirements for that system might be. The MCWL is currently experimenting with a similar, towed version called the Mobile Fire Support System and nicknamed "Dragon Fire." 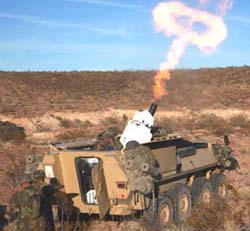 The 2R2M, developed by Thomson-Daimler Armements, is a 120mm rifled mortar internally mounted in a Mowag Piranha Light Armoured Vehicle. It uses a French army mortar as well as ammunition. It is contained in a powered traverse, elevation and loading system, using computerised instead of conventional sights.

The experiment involved day and night firing, employing the system for coordinated illumination and Suppression of Enemy Air Defences (SEAD) missions, which are used to mark anti-aircraft targets for fixed-wing aircraft.

"It was challenging, but the crews developed the skills to keep up very well," said MCWL senior engineer Rick Lindsey, retired lieutenant colonel and artillery commander. "We fired a total of 87 rounds in a short period of time for the SEAD missions and received good reports about the effects on target.

"From our viewpoint, this was an exceptionally valuable experiment and employed the 2R2M over varied terrain and situations."

The outcome of the experiment found the 2R2M to be an excellent fire support system, extremely mobile, responsive, powerful and accurate, according to Lindsey. The testing found the weapon could be deployed quickly and effectively despite the Marine crew's limited experience with the weapon.