PC News World War II Online for International Gamers
Playnet.com announced details of a limited offer to international gamers who want to experience the virtual battlefield of World War II Online- Blitzkrieg, the award winning massively multiplayer online game. The program, which kicks of Monday March 11th, provides players from outside North America the ability to purchase an activation key online. The purchase of the key for $9.99USD is followed by a full, no-cost download of the Windows-based game and a 7-day FREE trial. Once the free trial expires, a monthly subscription for $9.99USD is needed to continue play.

Operation Flashpoint SP Demo v1.42
There is now an updated single-player demo for Operation Flashpoint: Cold War Crisis, just in case you haven't tried out the original demo. Besides the original Ambush mission, this release also includes a new Skirmish mission and brings the demo up to speed with (nearly) the latest version 1.42 game code. Download

Sudden Strike II Site Opens
CDV Software has opened a new official Web site for Sudden Strike, II its upcoming World War II real-time strategy game. The new site contains a basic introduction to the game, answers to frequently asked questions, and a gallery of screenshots. Sudden Strike II is the follow-up to Sudden Strike, released in early 2001. The new game will let players command the Russian, British, American, German, or Japanese forces during World War II. Each side will have realistically modeled vehicles and troops. In addition, the new game will feature a more realistic damage modeling system. Release Date: Second Half of 2002.

Military News Bribe Scandal Rocks South Korean F-X Project
The political mists that have surrounded the South Korean F-X fighter procurement programme have thickened considerably with the revelation that a senior defence official has been arrested on suspicion of having accepted a bribe from a Korean agent for French company Dassault Aviation SA, makers of the Rafale jet.

The whole programme has been beset by delays and rumours of political pressure compromising the fairness of the selection process have persisted throughout.

The army colonel in question had previously given an unofficial interview to a Korean paper stating that the marking system being used was weighted in favour of the Boeing bid. The other competitors vying for the contract are Dassault's Rafale, the Eurofighter Typhoon, and Sukhoi's Su-32.

A French representative has met with Defence Minister Mr Kim on behalf of Dassault, in an effort to encourage a fair result to the selection process. A final decision was expected by April at the latest, but it remains to be seen how this latest revelation will affect this timeframe. However, it seems fair to assume that if any wrongdoing is discovered on the part of any of the competing teams, disqualification will follow.

ATK To Produce New Tactical Tank Ammunition Round
ATK (Alliant Techsystems) has been awarded a $27 million contract from the to begin low-rate initial production of the US Army's next-generation 120mm armour-piercing tank ammunition round. Two additional production options could bring the total contract value to more than $133 million over the next three to four years.

The contract comes at the end of a four-year engineering and manufacturing development programme for the M829E3 kinetic-energy round, which uses an advanced composite sabot and penetrator design and high-performance propellant to substantially increase the lethality and accuracy of the US Army's Abrams main battle tank at extended ranges.

The improved performance comes at a low cost, comparable to that of the currently fielded tactical tank ammunition round. The US Army plans to procure approximately 65,000 M829E3 rounds. Additional US Marine Corps requirements of more than 15,500 rounds will bring total rounds produced to over 80,000.

ATK Ammunition Systems developed the M829E3 round under a $47 million Army contract. The company will also manage the production programme. The M829E3 will eventually replace the M829A1 and M829A2 rounds. 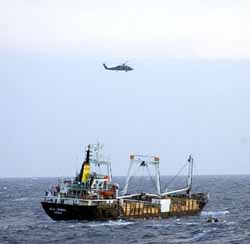 Hayler lost radar contact and communications with the helicopter while operating approximately 80 nautical miles west of Greece. Hayler, which has been joined by USS Ross (DDG 71), is currently leading search and rescue efforts for the three crewmembers.

The SH-60B Seahawk helicopter is a part of Helicopter Squadron Light (HSL) 46, which is home ported in Mayport, Fla.

The Navy will conduct an investigation into the cause of the crash.