Multiplayer in Global Ops supports up to 24 participants. The emphasis is on co-operative play as teams try to accomplish a wide variety of mission types including hostage rescue, bomb diffusing, escort and base destruction. A unique troop reinforcement scheme reinserts players into the game via a helicopter or truck. Global Operations will also feature single player action with AI bots. Demo 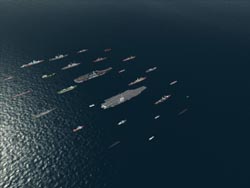 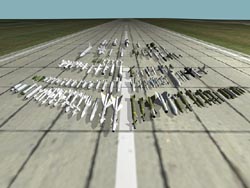 PC News New Predator Squadron Activated
The US Air Force has activated a third Predator squadron. The 17th Reconnaissance Squadron (RS) was activated on March 8 at Indian Springs Auxiliary Airfield, Nevada. The unit, which joins the 11th RS and the 15th RS, was activated by order of Air Force Chief of Staff Gen. John P. Jumper because of increased mission requirements based on Predator system success in Operation Enduring Freedom. 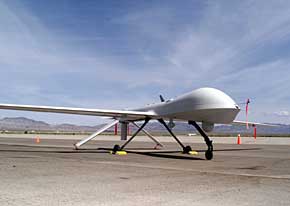 The initial cadre of experienced people will come from the 11th RS and 15th RS and from new crewmembers graduating from Predator training. The unit will begin receiving new Predators in the near future.The RQ-1 Predator is a medium-altitude, long-endurance unmanned aerial vehicle system designed to provide persistent intelligence, surveillance, and reconnaissance information to the warfighter.

More Lockheed Martin C-130J Aircraft Now on Contract
Lockheed Martin Aeronautics Company, a business area of Lockheed Martin Corporation, announced today that the five C-130J-30 transport aircraft appropriated in the 2002 U.S. defense budget have been placed on contract and will be delivered to the United States Air Force in 2004. The contract is valued at $355 million.

The C-130J-30, which is a company designation, has now been re-designated as CC-130J by the Air Force to comply with documentation requirements and designation system rules. 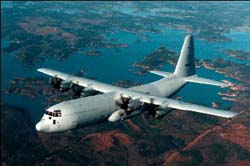 "With this contract and with a USAF multi-year acquisition plan in the 2003 defense budget, the future of the C-130J as a cornerstone of U.S. air mobility looks secure," said Ross Reynolds, Lockheed Martin's C-130J program vice president. "The C-130J is rapidly proving itself to be the world's most versatile and cost-effective airlifter."

Two of the five aircraft will be delivered to the 146th Airlift Wing, California Air National Guard, and one each to the 143rd Airlift Wing, Rhode Island ANG; the Air Force Reserve Command's 403rd Wing, Keesler AFB, Miss.; and the new C-130J Formal Training Unit at Little Rock AFB, Ark. The USAF currently has a requirement for a combination of 168 C-130Js and CC-130Js, of which 40 have been ordered to date.

Although designated a tactical airlifter, the CC-130J has demonstrated strategic capabilities by flying non-stop more than 4,000 miles without being refueled. As a result of the advanced technology incorporated into the CC-130J's design and its outstanding performance, this aircraft meets 80 percent of the world's airlift requirements.

The USAF CC-130Js will be equipped with the computer-controlled Enhanced Cargo Handling System, which allows quick conversion from cargo floor tie- downs to rollers for palletized cargo. When compared with the standard model, the CC-130J can carry 128 combat troops instead of 92 and 92 paratroops instead of 64. It can also carry eight standard military 463L pallets rather than six, 97 medical litters instead of 74 and 24 container delivery system (CDS) bundles instead of 16.

C-17 Test Team Puts On Brakes
Test experts are conducting a series of flight-tests aimed at providing C-17 Globemaster III aircrews with a new brake system and saving the Air Force millions. Maj. Mark Foringer, director of the C-17 test team here, and his team of experts are hoping test efforts can help make production of the C-17 more cost-effective and reduce the long-term support costs of the system. This is particularly important since the Air Force has secured funding for 120 C-17s through 2003, and Congress recently approved the procurement of an additional 60.

Foringer, with support from the C-17 System Program Office at Wright-Patterson Air Force Base, Ohio, and the Boeing Co. C-17 test team here, is leading the effort to try out the new system, which includes new tires and wheels. 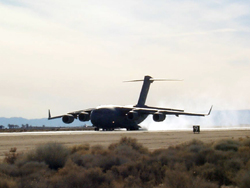 In another potentially money-saving twist, Boeing, which produces the C-17 for the government, is looking to join with industry and government teams to bring a commercial version of the aircraft, known as the BC-17X, to market. Because the Federal Aviation Administration requires much of the same test data for certification of the BC-17X, C-17 program officials have explored sharing the data collected during the brake testing with Boeing and the FAA.

Since the information generated by this testing is required for Air Force qualification of the new brake system for C-17, exploring FAA participation in the testing could potentially save the BC-17X program money without any additional charges to the Air Force.

Cost savings aside, Foringer said he is focused on demonstrating the performance of the brakes, wheels and tires to ensure there are no surprises for C-17 crews assigned to the new fleet of aircraft. The design of the aircraft allows it to operate on small, austere airfields, taking off and landing on runways as short as 3,000 feet. "Our goal is to ensure a pilot will know exactly how much runway he needs to take off or land the C-17," Foringer said. "A mistake in this area can be devastating."

Col. Tom Owen, C-17 system program director at Wright-Patterson, said the C-17 test team's contribution to the program will make a difference to the aircrews flying the new fleet. "Their structured and disciplined approach to test planning and execution assures that we deliver the best possible product to the field, a product in which the aircrews and those we support can be confident," Owen said.

Testing began with the antiskid optimization phase, which certified the aircraft's antiskid software was working with the new brakes. Now Foringer's team is working through a performance matrix. The matrix tracks the stopping distance and brake efficiencies to evaluate whether or not the new system will stop the aircraft within the C-17 specification limits. The team must demonstrate the system's capabilities in a number of different takeoff and landing configurations.

Test points are composed of rejected takeoffs and traditional landings at various weights, flap settings and brake energies. A rejected takeoff is one in which the crew aborts a takeoff during the takeoff roll, or is refused a takeoff by the control tower.

This type of takeoff, known as an RTO, is central to the test program. Such takeoffs are measured by the amount of energy the brakes exert to stop the aircraft once the takeoff is aborted.About half of the program's test points must be conducted on a wet runway. The test team relies on the base fire department to wet portions of the runway moments before each test. Getting the aircrew and all of the necessary ground activities in sync is no small feat, said Dan Osburn, the Air Force's lead engineer for the brake tests.

"There is so much concentration that has to happen to capture each test point, especially on the part of our aircrews," Osburn said. "They have to be visually and mentally aware of everything that is happening on that runway."

In its final phase, the team will load the test aircraft with concrete ballasts to its maximum gross weight of 585,000 pounds, plus an additional 5 percent. Once loaded, the aircraft will be refused a takeoff at maximum speed. This will be the capstone test point for the program and is expected to be completed this spring, Foringer said.

F-14 Crashes Off USS John C. Stennis; Aviators Safely Recovered
An F-14 Tomcat assigned to Fighter Squadron 211 aboard USS John C. Stennis (CVN 74) crashed into the North Arabian Sea March 8th, as it was attempting to land aboard the aircraft carrier. Both of the crewmembers were safely recovered from the water using the ship's rescue assets. Neither appear to have suffered serious injuries. 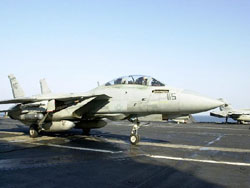 The plane was flying in support of Operation Enduring Freedom. The Navy will conduct an investigation into the cause of the accident. The names of the crew members are being withheld pending notification of the next of kin.