Judge Dismisses Columbine Lawsuit Against Media
A federal judge on Monday officially dismissed a lawsuit that claimed video games from Nintendo, Acclaim, Activision, and eight other game companies directly influenced the actions of Eric Harris and Dylan Klebold, who were responsible for the 1999 Columbine High School massacre. Id Software's Doom was one of the games specifically cited in the lawsuit, which was originally filed by the family of a teacher killed in the tragedy and on behalf of all the victims in the Columbine tragedy.

New Screens: Sudden Strike 2
CDV has released new screens showcasing Sudden Strike 2. Set in World War II, Sudden Strike is a tactical war game with authentic historical background and compelling gameplay. This time round players can control Russian, British, American, German and Japanese forces with historical reference and accuracy throughout. Each side will have their own realistically modelled vehicles and troops as well as a new damage model to provide an even greater emphasis on realism.

The purpose of the test was to demonstrate hard target perforation of the Broach warhead system in the AGM-154C JSOW Unitary variant. The multi-stage warhead used in the test included an augmenting charge and an inert follow-through bomb integrated with a JSOW airframe. The test simulated the speed at which a tactical weapon would impact a target. 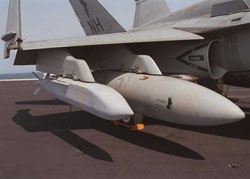 "The success of this test indicates that the Broach warhead can achieve the required performance on the JSOW-C weapon," said the Navy programme manager.

The JSOW-C is the first US weapon to integrate the Broach, developed by BAE SYSTEMS RO Defence in the UK. Incorporating multi-stage warhead technology, the Broach warhead consists of a penetrating shaped-charge in front of a conventional follow-through bomb. It provides blast/fragmentation effectiveness, as well as hard target penetration.

The US Navy will conduct independent dynamic sled testing of the Broach warhead system later this year. Operational testing of the JSOW-C airframe with the Broach against hardened targets is planned for early- to mid-2003.

JSOW-A and JSOW-B have completed Engineering and Manufacturing Development (EMD) and are in production. JSOW-C is in EMD.

JSOW is currently flying on the F/A-18, F-16, and B-2 aircraft and recently completed integration on the B-52 aircraft. Other ongoing JSOW integration efforts include the B-1B and the F-15E.

Smiths Aerospace Awarded LOSAT Contract
Smiths Aerospace has been selected by Lockheed Martin Missiles and Fire Control to provide the Missile/Launch Pod Reloader System for the Line-of Sight Antitank (LOSAT) Weapon System Programme under the ACTD Plus Programme phase. The LOSAT System is scheduled to be fielded in FY '06 according to Lockheed Martin.

Smiths Aerospace will design, qualify and deliver thirteen (13) systems by September 2002. The Missile/Launch Pod Reloader System will provide ease of loading and unloading of the kinetic energy missile (KEM), which is a hit-to-kill weapon. 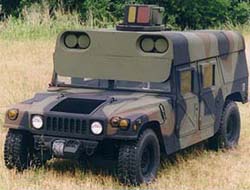 LOSAT is the United States Army's newest anti-tank program, with more than 170 production systems planned during the 2006-2012 timeframe. Thirteen LOSAT "pre-production" units will be fielded to the 82nd Airborne beginning in 2003 for testing.

The LOSAT system consists of the KEM, the IBAS-based fire control system on an expanded capacity HMMWV and a wheeled re-supply vehicle. The system is fully transportable by C-17, C-130, C-141 and C-5 aircraft, as well as the CH-47 helicopter and can be sling-loaded under the UH-60L helicopter.

US, Taliban Reinforce, Peacekeepers Die in Kabul
(Reuters) - The U.S. army and their Taliban-al Qaeda foes reinforced their positions amid fierce fighting in the mountains of eastern Afghanistan on Wednesday, while in Kabul two German and three Danish peacekeepers died in a munitions accident.

Hundreds of U.S. troops were flown to the battlefield to counter the al Qaeda-Taliban fighters, who were believed to be bolstering their positions as infiltrators slip into the mountain frontline to join besieged comrades. In what has developed into the biggest battle of the war, the U.S. military said 500 of 1,000 rebels, including some high ranking leaders, had already died in six days of fighting. [More...]

US Adding More Attack Helicopters to Afghan Battle
(Reuters) - The U.S. military is adding more than a dozen AH-64 "Apache" and AH-1 "Cobra" attack helicopters to a U.S.-led force locked in a fierce battle with al Qaeda guerrillas and Taliban fighters in the Afghan mountains, U.S. officials said on Wednesday.

The officials, who asked not to be identified, said as many as 12 additional Army Apaches would join a smaller number already involved in fighting around Gardez and that five older Marine Corps Cobras would also join the fight. "We are adding firepower," said one U.S. official. He said that a small number of additional Air Force A-10 attack jets were also being sent to join heavy American bombers and other aircraft. [More...]