Rage Licenses Karma Physics Technology
Rage, the UK-based computer games publisher and developer, is pleased to announce that it has entered in to an agreement with MathEngine, a leading middleware technology group, to license and utilise its Karma physics package within one of its forthcoming military-based action games featuring Andy McNab.

The technology will enable Rages development team to principally focus on game content from the initial stages of the design process whilst also delivering the programming team a powerful and flexible toolset to aid the overall project.

Rage signed an exclusive four-year agreement with best selling author and former SAS soldier, McNab, in late 2001 and is currently producing a series of different military-based action games in conjunction with McNab across a number of leading gaming formats. McNab is already working closely with Rages game designers to provide both technical and creative input as well as motion capture to help ensure the highest level of authenticity and realism. 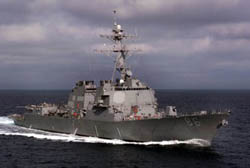 Shoup is the first Aegis destroyer to have only one at-sea trial, which was followed by a second trial held pier-side, marking the first time in the history of the company's Ingalls Operations that this system has been used. Previously, each ship underwent two separate sea trial evolutions in the Gulf of Mexico. Shoup accomplished her at-sea trial Jan. 22-25 and her equally successful pier-side trial Jan. 29-30.

Designated DDG 86, Shoup is named for U.S. Marine Corps Gen. David M. Shoup, the 22nd Commandant of the Marine Corps and World War II Medal of Honor recipient for his heroic actions during landings on Betio, Tarawa Atoll, in the Pacific in 1943. Cmdr. E. Bernard Carter, USN, of Hopkins, S.C., is the ship's commanding officer.

Gripen Provides Double Boost For Polish Aerospace Industry
Gripen International, jointly owned by SAAB and BAE Systems, has strengthened its partnership with the Polish aerospace and defence industry by signing two new industrial co- operation agreements linked to the supply of the Anglo-Swedish Gripen fighter to meet the future national and NATO defence needs of Poland.

Under the terms of a Memorandum of Understanding signed between Gripen partner Saab AB and PZL Swidnik, Saab personnel have confirmed that capabilities at Swidnik will suit the development of advanced new carbon-fibre (CFC) manufacturing techniques. This enables the Polish aerospace company to be considered as a supplier of complex CFC parts for Gripen, including nose and main landing gear doors. 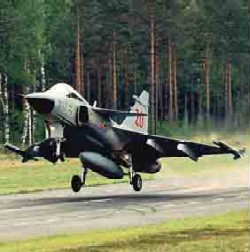 "The manufacture of CFC doors for Gripen will require significant technology transfer to Poland. These parts have complex, double curved surfaces which require advanced manufacturing techniques unlike anything that is currently manufactured in-country," said Simon Carr, sales and marketing director Gripen International.

A separate Memorandum of Understanding relates to WZL-2 in Bydgoszcz. Under the agreement, the Bydgoszcz facility will be the major candidate to provide maintenance facilities and logistics support for the Polish Air Force Gripen fighters, including the manufacture of spares and the conversion of existing ground support systems to minimise the cost of introducing Gripen into Polish Air Force service. It will provide workers in Bydgoszcz with involvement in the integration of weapons specifically required by the Polish Air Force and the manufacture of components and sub-assemblies for export to Sweden and other countries.

"The industrial partnership agreements with PZL Swidnik and WZL-2 Bydgoszcz underline the broad and powerful direct offset programme available in support of Gripen," concluded Carr. "We have already established industrial activities in Poland which amount to around $US 60 million and are totally committed to providing local companies with a long-term benefit from the Polish fighter procurement program, if Gripen is selected."

US Chopper Crashes in Philippines; No Survivors Yet
DUMAGUETE, Philippines (Reuters) - Three American soldiers were killed when their special forces helicopter involved in anti-terrorist training exercises crashed in the sea in the southern Philippines Friday, officials said. 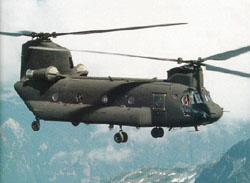 Seven others were listed as unaccounted for and rescuers said hopes of finding any of them alive were fading. The MH-47 Chinook helicopter, with eight crew and two other soldiers on board, went down during a night flight in the Bohol Strait some 410 miles south of Manila, said Brigadier-General Donald Wurster, special forces chief of the U.S. Pacific Command.

The victims were the first casualties in what is viewed as the second front of Washington's stepped-up war against terror. Some 660 U.S. soldiers are in the southern Philippines to help train the local military to fight Muslim guerrillas linked to Osama bin Laden. [More...]

Northrop Grumman Proposes to Acquire TRW
Northrop Grumman Corporation today announced that it has forwarded a proposal to TRW's board of directors to enter into negotiations to combine the two companies. The proposed transaction would deliver $47 in value of Northrop Grumman common stock for each share of TRW.

"We believe the strategic combination of Northrop Grumman and TRW will provide tremendous value to the shareholders of both companies," said Kent Kresa, Northrop Grumman's chairman and chief executive officer. "Northrop Grumman's electronics and systems integration capabilities, combined with TRW's space and systems expertise, would create a strong contributor to the nation's satellite and missile defense requirements.

TRW Inc. acknowledged receipt from Northrop Grumman of an unsolicited proposal of $47 in Northrop common stock for each share of TRW common stock. TRW's Board of Directors will address the Northrop proposal in order to determine the appropriate course, which will serve the best interests of TRW's shareholders and other constituencies. Shareholders need take no action at this time.

TRW finds it regrettable that Northrop Grumman has chosen to make this proposal immediately following the unexpected departure of its former Chief Executive Officer, David Cote, and the aberrationally low stock price that resulted.