PC News New Screens: Ghost Recon Mission Pack
Ubi Soft has sent us new screens from their upcoming release, Ghost Recon Mission Pack. The pack will ship in March 2002 and will contain 8 new Single-Player missions. The missions will be based in North Africa, focusing on a future conflict between Ethiopia and Eritrea. The Mission Pack will feature a new environment - the Eritrean desert, new enemies and new desert uniforms for the Ghosts. 4 New Multiplayer spaces will also be included in the Mission Pack.

Also, the RTCW official site has made the intro movie for the game available. Intro movie

ELSA Quits Consumer Graphics
ELSA has announced it will no longer market consumer-level graphics cards in North America. The company has an established partnership with Nvidia to produce Quaddro-based graphics cards for professional workstations intended for CAD and digital content creation. The decision does not directly affect ELSA international branches, which may continue to produce gaming cards.

Military News F-16 Crashes In New Jersey
An F-16 Fighting Falcon crashed Jan. 10 in New Jersey. The pilot from the New Jersey Air National Guard, based out of the Atlantic City International Airport, ejected safely, but with minor injuries. The plane crashed in a heavily wooded area near a highway. Air Force officials will investigate the incident.

ACC's Commander Meets The Raptor
As the leader of Air Combat Command touched down in an F-16 Fighting Falcon chase plane here Jan. 8, he had just one word to describe the F-22 Raptor he was tailing -- "awesome."

"I never thought I would see this kind of capability in an aircraft," said ACC Commander Gen. Hal Hornburg during his very first visit here Jan. 7 and 8. "It's very, very impressive."

Hornberg visited the Air Force Flight Test Center here so he could see first-hand what the flight-test community is bringing to the warfighters he commands. After a series of extensive briefings on the F-22's capabilities, Hornburg made it clear he is relying on the flight-test experts here to push the F-22 envelope. 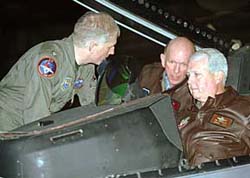 "When our more inexperienced pilots get their hands on the F-22 they will know exactly what they can and can't do," Hornburg said. "There is an enormous amount of proficiency and discipline that goes into testing this aircraft. Edwards is top to bottom loaded with professionals, and I know they will hand it to us in the best condition that any aircraft could ever be in."

Besides flying with the F-22 Combined Test Force, Hornburg was introduced to numerous weapons systems undergoing flight-test and evaluation here including the Global Hawk and the Unmanned Combat Air Vehicle.

Throughout the visit, the two generals talked of a new partnership that will serve both the flight test center and Air Combat Command in the future.

Hornburgs visit to the flight test center is the first of many to come adding, he said.

Before heading home to Langley Air Force Base in Virginia, Hornburg also visited with students and staff at the U.S. Air Force Test Pilot School here. (Photo by Derk Blanset)

Boeing's Final Assembly On Newest Apache Longbows
The first of 269 additional U.S. Army AH-64A Apaches scheduled to become next-generation AH-64D Apache Longbow combat helicopters has entered final assembly at Boeing here. Boeing is upgrading all 269 AH-64As as part of the latest five-year, multi-year contract with the Army. The contract is in addition to an earlier multi-year order for 232 aircraft, which is nearing completion. 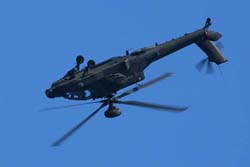 Apache Longbows produced under the newest contract will incorporate a series of upgrades, such as advanced technologies for the digital battlefield, that make them the most advanced Apaches ever produced. Apache Longbow helicopters link a wide range of avionics and weapons into one fully integrated weapon system.

To date, five combat-ready U.S. Army Apache Longbow battalions have been fielded, and additional units are in training.

The deal was reached through co-operation between the Tornado Integrated Project Team (IPT) within the Defence Logistics Organisation (DLO), RAF Strike Command, BAE SYSTEMS and other industry organisations. The BAE Systems solution involves a one-stop service that should ensure availability for the four items, including all technical support. 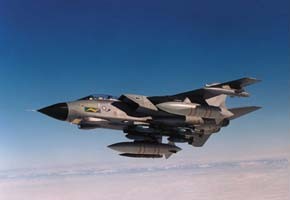 "This structures contract paves the way for developing further our partnering relationship with the Tornado IPT in the DLO," commented Nick Kilner, the BAE SYSTEMS co-team leader of the Tiger Team. "We have proven that through working together we can take out at least 20 per cent from support costs through rationalisation and performance-based pricing."

This is the second contract to be awarded as a result of the work of the Tornado 'Tiger Team'. The team is developing streamlined ways of supporting and servicing the aircraft. The first contract, which extended support for GR4 avionic items from five to ten years, was awarded in June 2001 to a value of approximately £45m. The Team is now working towards bringing to a successful conclusion the remaining two pilot proposals within Phase 1, the secondary power system and ADV Foxhunter radar, worth together at least £150m.

India's Tank Force Not As Potent As Numbers Indicate
A comparative analysis of India and Pakistan tank forces finds that India's superiority in numbers is questionable. In the wake of the military standoff between the two nations, Forecast International's Weapons Group finds it is more than raw numbers that count.

India's 4,880 tanks outnumber Pakistan's 2,808 by nearly 2-to-1, yet India's inventory includes several obsolescent models, most importantly the Vijayanta (the Vickers Mark 1) and the T-55.

"Nearly all of these tanks are in bad disrepair and in need of major overhaul," said Forecast International's Weapon Systems Analyst Greg Fetter. "Most of India's T-55s have never been overhauled or modified and more than 90 percent of India's T-54/T-55 inventory is considered non-operational."

The condition of the T-72, the mainstay of India's armoured force, is not much better, according to Fetter. "These tanks need a major overhaul and at least 70 percent of the inventory is not considered fully battleworthy," he said.

Fetter said India's Avadi tank production and retrofit facility has been riddled with bureaucratic inefficiency, which has greatly hindered its effectiveness. Contributing to the sad state of affairs has been the disastrous programme to develop an indigenous tank, the Arjun.

"This debacle cost India over $1.23 billion and explains why the necessary maintenance, overhauls and upgrades for the T-72 and other Indian tanks have not been funded," Fetter said.

The single bright spot in India's tank programme is the acquisition of the Russian T-90, but the first of these has only just arrived in knock-down state. Even after assembly, crews for the new tanks will need extensive training.

"The new T-90 tank cannot be considered a viable component in India's armoured force structure until mid-year and even then in small numbers," Fetter said.

Pakistan's tank inventory, while significantly smaller than India's, has been much better maintained and upgraded over the years. The Taxila facility, built with Chinese aid, can undertake any level of modernisation and retrofit of existing tanks as well as the assembly and manufacture of new production tanks and components.

"In terms of numbers, Pakistan's Type 59 (licensed T-54) represents the country's largest single tank type," Fetter said. "The nation has implemented and maintained a major and comprehensive modernisation and retrofit effort for these tanks."

This effort, plus similar ones for Type 69-IIMP, has made these tanks fully battleworthy. The Type 85-IIAP, one of two tanks being manufactured, is a modern design that is well maintained and ready for combat.

Both Pakistan and India have worked at developing an indigenous tank but Pakistan has been more successful with its programme. However, as the first order for fifteen tanks has yet to be fully delivered, this new tank cannot figure in any comparative analysis, at least for some time.

The star of Pakistan's tank inventory is the T-80UD and the reason why India ordered the T-90 from the Russia. The Pakistani T-80UD tanks are fully operational and can deal with any Indian tank including the new T-90.

Forecast International/DMS Inc is a provider of Market Intelligence and Analyses in the areas of aerospace, defence, power systems and military electronics.

DOD Indentifies Marines Killed In Refueler Crash
DoD announced the names of seven Marines who died Jan. 9 when their KC-130/R refueling aircraft crashed into a mountainside in Pakistan. The plane at the time was attempting to land at the Forward Operating Base at Shamsi, Pakistan.

A mortuary team is en route to the area said Pentagon spokeswoman Torie Clarke. Officials in theater will be augmented by others from the 3rd Marine Air Wing as the investigation into the cause of the crash continues.

The Marines were members of Marine Aerial Refueler Transport Squadron 352. The squadron is attached to Combined Task Force 58, in support of Operation Enduring Freedom. The crew was home-based at the Marine Corps Air Station Miramar, Calif.

"It's another sign of just what an incredible risky business these people are in," Clarke said. "Just getting up and going to their jobs every single day is extraordinarily dangerous. They deal with dangerous equipment, in unusual and dangerous circumstances. There's a huge sense of gratitude on the part of people like us, that they are willing to do it."