PC News Ace of Angels Update
Flying Rock Enterprises has announced their new space simulation, Ace of Angels, a title currently in development has been selected as a finalist in the 2002 GDC's Independent Games Festival. Currently in early beta, the next major release/update will include the following new features: Ace of Angels. 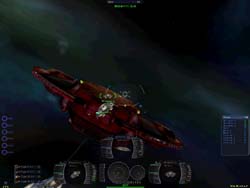 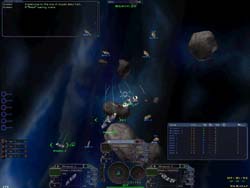 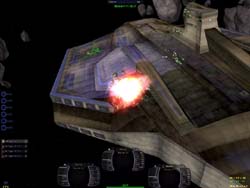 Sudden Strike 2 Announced
German publisher CDV has announcemed that they have signed Sudden Strike 2, the sequel to the real-time strategy game set in World War II, which will again be developed by Russian company Fireglow Studios. The announcement has no other relevant details about the game, except that a release "in Germany is planned for the first half of 2002."

The test, at the Western Test Range in Nevada, was typical of an Air Force operational attack on a high value target. The missile was launched from a B-52 Stratofortress at an altitude of 24,000 feet and flew autonomously to the mission planned target. It used its seeker to provide precision guidance and destroy the target.

JASSM is a 2000-pound class weapon with a multi-purpose penetrator warhead. It is planned for deployment on B-1, B-2, B-52, F-16, and F/A-18 aircraft. JASSM gives Air Force and Navy aircrews long-range capability against a wide range of high value, heavily defended targets.

"We understand how critical JASSM's capabilities are to the Air Force," said Larry Lawson, Vice President of Strike Weapons at Lockheed Martin. "Being able to destroy hardened targets from long range is important to the Air Force. This test shows that JASSM is capable against these target types as well."

Saturday's seventh development test was designed to validate JASSM system performance and warhead effectiveness. There will be one more development test in early 2002, then the programme will begin the Independent Operational Test and Evaluation (IOT&E) series.

"With the success of this test, the baseline JASSM development programme will be complete following our final test early next year," said Colonel Tim Moore, JASSM Joint Programme Office programme manager. "We have clearly demonstrated that the missile exceeds the operational requirements. Completion of development testing positions JASSM for success during the operational testing phase."

ATK to Develop Propulsion and Warhead For Spike Missile
ATK (Alliant Techsystems) has been awarded a $4 million contract from the Naval Air Systems Command, China Lake, Calif., to develop the propulsion system and warhead for the Spike shoulder-fired missile.

Under the three-year program, ATK Thiokol Propulsion Company, Promontory, Utah, will develop and test the Spike propulsion system for safe handling and firing, continue development to maturity, and deliver quantities to the Navy for flight testing.

Spike is a low-cost, fire-and-forget guided missile and launcher system designed to defeat targets such as unarmored or lightly armored vehicles, infantry fighting positions, mobile anti-aircraft systems, and slow-moving helicopters. The missile weighs 4.4 pounds and the launcher weighs 5.1 pounds, making the system easily carried in a backpack. Other potential applications include use as a tactical armament for unmanned aerial vehicles.

C-130J Super Hercules Achieves Outstanding Success
The Lockheed Martin C-130J has again proved its outstanding tactical capabilities during trials in conjunction with the Royal Air Force. A joint RAF/Lockheed Martin team recently completed a Tactical Workload Demonstration program for the C-130J airlifter. The demonstration -- a rigorous flight test program that consisted of more than 120 flight hours over 41 missions -- validated the capabilities of the C-130J under simulated operational conditions.

"Over recent months we, QinetiQ (formerly part of the U.K. Defence Evaluation & Research Agency) and the resident project team achieved excellent results with two-ship formations and are at last seeing the true tactical potential of the Royal Air Force C-130J equipped with the new Block 5.3 avionics software," said Royal Air Force test pilot Sqn. Ldr. Rob Humphries. "Over the next 12 months, the Project Team, RAF pilots and QinetiQ technical experts will assess this tactical potential. Once proved, the effective military capability will be released to the front line." 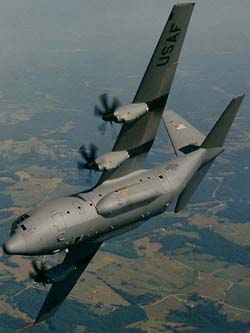 In addition to the flying portion of the demonstration program, another 15 missions, totaling more than 40 hours, were flown in the simulator. During the testing, sorties were flown as single-ship and multiple-ship formations. The aircrews were able to routinely execute multiple tactical mission events while maintaining target time control typically within 10 seconds. Mission profiles included simulated emergencies, tactical threat maneuvering, time-on-target changes, drop zone changes and airport diversions.

The demonstration looked at many capabilities of the C-130J system, most notably the performance of the coordinated air positioning system/station keeping equipment (CAPS/SKE) formation system. The ability of the radar to aid in aircraft navigation during simulated airdrops under instrument conditions impressed the test crews.

One reason behind the success of the Tactical Workload Demonstration program was the new Block 5.3 software now being installed in the worldwide fleet of C-130Js. The software incorporates substantial upgrades and new capabilities that bring the aircraft's avionics system to full functionality. Block 5.3, known as the aircraft's "go to war package," is now the baseline for all production C-130J aircraft. The RAF, the launch customer for the C-130J, has 25 of the new aircraft, comprising 10 "short" models and 15 of the "stretched" C-130J-30s.