Cossacks: The Art of War Released
Cossacks - The Art of War is now available in German stores. Publisher CDV Software Entertainment AG released the long-awaited add-on to blockbuster Cossacks: European Wars. The add-on is scheduled for release the 23rd of November in France and the 1st quarter 2002 in UK and the USA.


The first printing of Decisive Action contains a potentially serious bug in the installation program. This bug, when encountered, causes a Windows failure at startup, resulting in an Invalid Instruction error in Windows Explorer. The problem is very rare, occurring at a rate of less than 1/4 of the total games installed, and appears to be heavily dependent on the system configuration. So, if you have DA installed now, you can likely install it again on the same machine without any problems.

However, rather than take any chances, HPS is posting an installation patch (13.3 MB) on the web site, which we strongly suggest all DA users download. Please click here to access it. Instructions for its use are provided on the link page. Additionally, HPS will replace all first-edition DA disks free of charge once we get the corrected version in stock. We ask only that customers please return their existing DA disks ALONG WITH YOUR NAME AND CURRENT MAILING ADDRESS to the main HPS PO Box for verification purposes.

In this case, the bug was caused by program code outside the control of HPS, specifically the third-party installer. However, HPS fully stands behind its products no matter where the problem occurs, and we want to sincerely apologize for the problems this bug may have caused our customers. We also appreciate your patience while we get this issue resolved.

World Cyber Games US Finals This Weekend
The US Finals of the World Cyber Games are scheduled for this Thursday through Sunday in Los Angeles. The best gamers in the country will be gathering to determine who will represent the United States at largest gaming festival in history, the World Cyber Games Championships, which will be this December in South Korea. The three day finals event will feature competition in three PC games: Quake III: Arena, Starcraft: Broodwar, and Age of Empires: Age of Kings. The US champions will face off in Korea against over 400 international competitors from almost 40 nations.

The LA event, which is open to the public, will be held at NiX Cafe, 333 South Western Avenue, Los Angeles. Play will kick off at 3PM on Friday, November 16 and continue over the weekend.

Military News Photo of the Day: Bombs Away 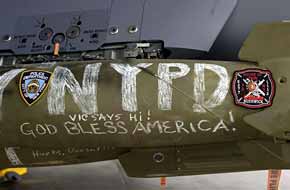 U.S. Army TUAV Reaches Milestone
United Industrial Corporation today announced that its AAI Corporation subsidiary has completed a series of major milestones in its ongoing work on the $106 million Tactical Unmanned Aerial Vehicle (TUAV) program for the U.S. Army. These include a group of highly successful demonstrations that exceeded expectations and have advanced the TUAV's development, from testing new technology and capabilities to demonstrating the TUAV system's interoperability with other systems.

Among the highlights was the successful 5-day government-conducted test of the Operational Tempo (OPTEMPO) requirements of the TUAV system. The completion of this exercise, which evaluated the TUAV's ability to conduct surveillance over its target for a required period of time, helps pave the way for incremental contract awards as early as January 2002. The Company also completed the final flight demonstration portion of the TUAV/Tactical Control System (TCS) Integration Flights program, which served both as the first successful integration of a Tactical Control System with a TUAV and as a demonstration of the Army TUAV's interoperability with systems from other branches of the Armed Forces. Finally, AAI Corporation successfully demonstrated a unique Airborne Video Surveillance (AVS) capability for UAVs that the Company had been developing with the Defense Advanced Research Projects Agency (DARPA). This AVS capability, tested onboard a Shadow TUAV, will allow UAV mission operators to more accurately locate tactical targets transmitted in near real time.

"We are delighted with the outstanding results of the TUAV's recent demonstrations," commented Richard R. Erkeneff, President and Chief Executive Officer of United Industrial. "The milestones achieved reflect the continuing promise of our UAV technology and the significant progress made to date on this important program. In addition, we expect this contract to play a valuable role in advancing UAV capabilities as a whole, as we continue to refine key technologies to meet a range of increasingly sophisticated applications."

Naval Commando Ship Launched
HMS Bulwark, the second of a new class of assault ships for the Royal Navy, has been launched today at the BAE SYSTEMS shipyard at Barrow-in-Furness.

Bulwark and her sister ship, HMS Albion, also being built at Barrow, are known as Landing Platform Docks (LPDs). They are designed to transport an embarked military force of around 300 people, plus their equipment, vehicles, and stores, across open oceans and land them on hostile shores using landing craft and helicopters. They can also co-ordinate amphibious operations through their integrated command, control, and communications systems.

Bulwark is 176m long, with a deep displacement of 18,450 tonnes, has diesel-electric propulsion with an estimated range of 8,000 nautical miles at 15 knots, and carries a crew of 325.

Following launch, Bulwark will be fitting out until beginning contractor's sea trials in February 2003.The ship is programmed for acceptance by the Ministry of Defence at the end of March that year.

Bulwark and Albion are nearly half as big again as the vessel they will replace, HMS Fearless, which is now deployed in the Gulf with the Royal Marines in support of operations in Afghanistan.

Defence Procurement Minister Lord Bach said, "The MoD and the shipyard are now working flat out to complete the first of class, HMS Albion, so that she can replace Fearless in early 2003, at least two months ahead of schedule."

The new ships will be equipped for the command and conduct of intensive amphibious warfare operations involving 3 Commando Brigade and other elements of the Joint Rapid Reaction Forces at a much faster tempo than is now possible. They are planned to operate with the new helicopter carrier HMS Ocean and four planned new Bay class auxiliary landing ships.

Simon Kirby, managing director of BAE SYSTEMS Marine, said: "Bulwark's launch is a visible example of the high level of teamwork which is vital to any successful project, and an illustration of the skills, expertise, and sheer hard work contributed by everyone involved.We look forward to maintaining the excellent co-operation between BAE SYSTEMS, our customer, and our suppliers as Bulwark moves further into the outfitting phase, leading to hand over in 2003."

BAE SYSTEMS-IFS Support Advances On JSF And Eurofighter
BAE SYSTEMS-IFS has been selected to supply and support its logistics management system for the Joint Strike Fighter programme. This follows its recent selection for Eurofighter.

Lockheed Martin recently received an upgrade to IFS Applications, delivered to LM Information Systems in Orlando. In the UK the JSF maintenance package will be integrated with the MOD's Defence Logistics Organisation systems during preparation to bring the UK Joint Strike Fighters into service with the RAF.

The IFS Applications software package will enable major advances in aircraft support planned for both aircraft. Open architecture and inherent connectivity allow interfacing with on-board aircraft systems to assist both prognostic health monitoring ('advance warning of equipment failure') and condition-based maintenance (maintenance based on need rather than service intervals).

The IFS e-business solution is designed to improve the availability of critical items whilst reducing the investment in spares. Web-based technology will link partners, users, and suppliers throughout the supply chain, providing seamless integration of all data sources. The system will track equipment both on the aircraft and through the industrial repair loop and transportation system.

IFS Applications will also be an integral part of the four-nation Eurofighter support infrastructure when the aircraft comes into service in 2002. Under the Industrial Exchange and Repair System (IERS), suppliers will be paid for a 'rotable' exchange or repair service as opposed to the traditional method of national air forces ordering, receiving and stocking spare parts.

Eurofighter operating bases, partner companies, 60+ suppliers and Eurofighter GmbH itself will use IFS Applications software to ensure availability of spares and management of supplier performance.The system, which will be the interface between industry and the Eurofighter air forces, will also manage all engineering data associated with equipment repair and will link up to each national air force IT network as well as the aircraft's own systems.

'BAE SYSTEMS-IFS participation on both the JSF and Eurofighter programmes positions us as the leading global supplier of logistics management systems for the most advanced air weaponry of the 21st century and provides the foundations of common, streamlined support processes for allied air forces,' commented its managing director Simon Dowler.

U.S. Forces Rescue Eight Detainees In Afghanistan
Yesterday, At Approximately 4:40 P.M. Est, Three U.S. Special Operations Helicopters Landed In A Field Near Ghazni, Afghanistan, About 50 Miles Southwest Of Kabul, And Picked Up The Eight Detainees, Including Two Americans, Who Had Been Held By The Taliban.

The detainees are now in Pakistan. They seem to be in good physical condition. More details will be available once they have arrived at their final destination in Pakistan.

Secretary of Defense Donald Rumsfeld said, "This effort involved many people and several entities. U.S. forces performed the extraction well, and the American people can be proud of them."

DoD Unsure About Taliban Withdrawals: Retreat or Tactics?
DoD officials are not sure what the Taliban intends to do next. Reports from Afghanistan show, and DoD officials confirmed, that Taliban troops are rapidly abandoning cities they've held for years.

"It's not clear exactly why they may be doing that," DoD spokesman Navy Rear Adm. John D. Stufflebeem said. He told Pentagon reporters today that the Taliban forces may be in all-out retreat or they may be just pulling back to regroup. DoD News Briefing slides and video, Nov. 14, 2001

Stufflebeem also said the Taliban troops may just be going home, noting that many of them are ethnic Pashtuns from the southern part of Afghanistan. He said it's difficult to tell who in the southern region are members of the Taliban and who are simply Pashtun tribesmen.

U.S. officials are stressing that the U.S. military's mission in Afghanistan is far from over. "While progress continues to be encouraging, more remains to be done," Stufflebeem said. "Our overall military objective is to eliminate global terrorism, including the Al Qaeda organization."

He said it would be dangerous to assume the Taliban are no longer a threat. "We still believe that we have a hard job in front of us," he said. "It may still take some time."

Updating the operational situation on the ground, he said Northern Alliance troops have "continued to make gains south of Kabul as well as Herat and are at the outskirts of Jalalabad." He noted that Pashtun tribes in the south are apparently rebelling against Taliban control for the first time in this conflict. U.S. officials can't, however, identify exactly who's fighting the Taliban in and around Kandahar, he said, adding a number of Pashtun tribes in the south would appear now to be opposing the Taliban.