PC News Tom Clancy's Ghost Recon Ships
Ubi Soft Entertainment and Red Storm Entertainment has announced that the title Tom Clancy's Ghost Recon has shipped. Set in the year 2008, Tom Clancy's Ghost Recon is a squad based tactical combat game that follows the exploits of a fictional US Special Forces team. Russia has fallen under the control of ultra-nationalistic leaders intent on rebuilding the Iron Curtain. This leads to conflict with NATO as Russia attempts to reclaim the breakaway republic of Georgia, and the Baltic states of Estonia, Latvia and Lithuania. As the war escalates, casualties mount, hostages are taken and the Ghosts are sent in. The player takes command of the Ghosts through a series of missions that range from demolitions, to search and rescue, to all-out firefights for survival.

Falcon 4 SuperPAK 1 Released
The Falcon4 SuperPAK Unified Team is pleased to announce the version 1 of the Falcon SuperPAK. This project has been started to transform Falcon 4.0 into the most realistic simulation it can be. After individual releases of eFalcon V1.10 and RPG's Realism Patch 5, now, in November 2001, the unified exe is a reality. This first release of the Falcon 4 Unified Team is a simple combination of the in-Cockpit realism enhances eFalcon V1.10 offers with the superior artificial intelligence that can be found in Realism Patch 5. Click here

The facility, based at RAF Waddington, near Lincoln, has been developed to provide training for the Royal Air Force and French Air Force. Sentry E-3Ds provide early warning and fighter control systems and play a critical role in air-based military operations. 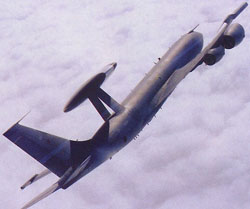 Britain has seven E-3Ds and the French four, most of which are deployed across the globe.

Lord Bach, Minister for Defence Procurement, said "The contract, which has come in three months early, is worth approximately £55 million over 30 years. We estimate that by using PFI we have saved the taxpayer approximately 29% of the cost of a conventionally procured MOD-owned training service. This facility significantly enhances the RAF"s Sentry E-3d aircrew training. Users have compared it to the difference between black and white and colour.

The facility has been developed by UK-based Quest Flight Training Ltd on behalf of MOD under a Private Finance Initiative (PFI) contract. Quest will provide all the equipment, staff and training to the RAF for a 30 year period.

The contract includes the provision of a complete training service, including an upgraded Dynamic Flight Simulator, instructors, maintainers, courseware, upgraded facilities and infrastructure, and support for the life of the contract. As part of the contract the original simulator was transferred to Quest.

The French Air Force does not have its own Sentry training centre, and will buy time from Quest on an hourly basis.

The company will provide a total powerplant support package, worth 100 million pounds over the next three years. Future support programmes envisaged for 2004-2011 are potentially worth a further 300 million pounds. 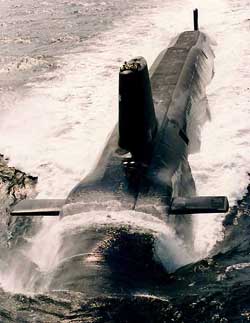 The contract covers design improvements, inspection, refurbishment, condition monitoring and a continuous safety review for the nuclear powerplant, which creates the steam to drive a submarine's turbines. Rolls-Royce will also continue to conduct research into future power plant development.

Saul Lanyado, Rolls-Royce President - Marine, said: "This contract is a welcome recognition of the skills and expertise we provide to form an effective partnership with the Ministry, securing our long-term future as the national strategic centre for naval nuclear propulsion."

"Through the strong efforts of our teammates Litton and Paravant, we have consistently stayed ahead of the government-required delivery schedule and expect to complete deliveries a month or more ahead of schedule," said Paul Dixon, TRW's FBCB2 LRIP program manager.

These Applique+ Version 4 computers, added to those recently tested during the Army's Division Capstone Exercise at Fort Irwin, Calif., on platforms ranging from HMMWV's to Abrams tanks, bring the total to approximately 3,000 FBCB2 systems running Version 3.3.4 software. Version 3.4.4 was released on July 28 in preparation of the field test scheduled for September and the FBCB2 Initial Operational Test & Evaluation scheduled for December.

The FBCB2 application software, a key component of the Army Battle Command System, hosted on the Applique+ V4's, is the Army's digital battle command information system at the brigade level and below. The FBCB2 system provides soldiers and leaders in combat units, combat support units, and combat service support units, with on-the-move, near real-time situational awareness and command and control information, allowing them to see friendly and enemy forces on screen.

Myers said the Northern Alliance advances finally could not have been achieved without "the Afghan citizens' rejecting Taliban control and, in some areas, (the) Taliban defecting to the opposition rather than face destruction." 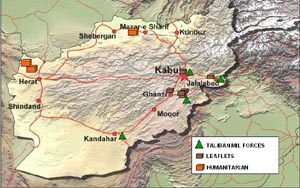 Myers said that the Northern Alliance on Friday controlled roughly 15 percent of Afghanistan. Today, they have forces in roughly half the country.

"The Taliban appear to have abandoned Kabul and some Northern Alliance forces are in the city," Myers said. Defense Secretary Donald H. Rumsfeld confirmed this and said some U.S. Special Forces soldiers are on the ground with the Northern Alliance in Kabul.

Rumsfeld also announced that U.S. special operations forces are on the ground in southern Afghanistan. They are not acting with tribes or factions, but are contributing in their own ways.

While pleased, Rumsfeld said the effort is not about "one man or one terrorist network or even one country." He stressed that capturing or killing Osama bin Laden will not end the problem of terrorism. Officials estimate that just Al Qaeda has cells in more than 60 nations.

"It's a problem that needs to be stopped because, as the president said, 'Terrorism is a threat that cannot be ignored nor can it be appeased,'" Rumsfeld said.

He said the U.S. priority is to hunt down the Al Qaeda and Taliban leadership, destroy their military forces and to build a "land bridge" to bring food and medical supplies to Afghanistan through Uzbekistan.

U.S. or coalition forces may be used to open the land bridge. It's also undecided who will rehabilitate air fields in Mazar-e Sharif and Kabul. Rumsfeld said Army Gen. Tommy Franks will discuss the problem with the 15 to 20 foreign liaison officers at U.S. Central Command.

"They will look at capabilities and what might be appropriate for countries to provide," Rumsfeld said. The recommendation will go back through political channels for approval and the countries involved will make the announcements.

He said Taliban and Al Qaeda forces have a limited number of choices. They can flee and reorganize in the south of Afghanistan, flee and melt into countryside, flee to other countries, or they can defect.

"If they reorganize in the south we will go get them," Rumsfeld said. "If they go to ground, we will, as the president said, we will root them out. If they decide to flee, I doubt they will find peace wherever they select."