PC News The War Engine Shipping
Shrapnel Games announced today that the highly anticipated contstruction set, The War Engine, has begun shipping. Due to heavy pre-orders, all backorders are expected to ship by end of business, October 24th. The War Engine is the ultimate wargame construction kit. With it you can easily construct any number of war, strategy, or conflict based games by simply defining the rules, and units involved.

New Screens: Cossacks: The Art Of War
CDV has sent us new screens from the upcoming Cossacks add-0n The Art of War. The new screens depict the fantastic possibilities you gain with the record-and-replay function and the map editor in Cossacks: The Art of War. The add-on will not only feature more detailed graphics, but also very useful functions such as the "record and replay" function which will enable the gamer to record his or his opponent tactical move and to replay it. Furthermore the gamer will create own maps with the help of the map editor which also includes the possibility to change everything from trees to ledges with the relief technique. Cossacks: The Art of War is scheduled for release the 16th of November, 2001 in Germany and in the 1st quarter of 2002 in UK and in the USA.

Military News C-130J-30 Passes Paratroop Test
Tests to ensure that the C-130J-30 transport can safely drop paratroops from both sides of the aircraft have been completed The joint test programme by the US Army's Airborne and Special Operations Test Directorate at Fort Bragg, in North Carolina and the US Air Force's 43rd Airlift Wing validated the longer fuselage length C-130J-30 for paratroop airdrop operations.

Following completion of testing, the aircraft was flown back to Marietta to be prepared for delivery in early December to the 143rd Airlift Wing, the Rhode Island ANG unit based at Providence, R.I. 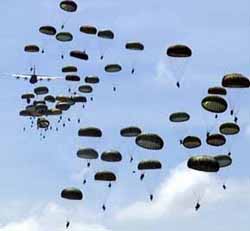 This version is the first stretched C-130J to be equipped with the computer-controlled Enhanced Cargo Handling System, which allows precise airdrop event sequencing and quick conversion from cargo floor tie-downs to rollers for palletised cargo.

When compared with the standard model, the J-30 can be used to carry 128 combat troops instead of 92, and 92 paratroops instead of 64. It can also carry eight standard 463L pallets rather than six, 97 medical litters instead of 74, and 24 container delivery system (CDS) bundles instead of 16.

"This was probably one of the most significant milestones for this programme to reach," said Ross Reynolds, Lockheed Martin's C-130J programme vice president. "The feedback from the Army has been nothing but positive, and the jump community certainly wants the new aircraft as soon as possible."

The C-130J-30 is important to the US Army's modernisation efforts. With the need for rapid, flexible deployment and sustainment, one of the Army's new weapons systems key acquisition parameters is the requirement for them to fit in a C-130J-30. Although designated a tactical airlifter, the C-130J-30 has demonstrated strategic capabilities with unrefuelled, non-stop flights of more than 4,000 miles. 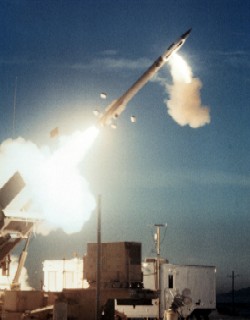 The mission was the first PAC-3 flight test to utilize the newest Patriot software update (Post Deployment Build 5+ software) in the simultaneous engagement of a surrogate cruise missile target and sub-scale MQM 107 drone. After radar acquisition and target classification of both targets by the Engagement Control Station, a PAC-2 missile was launched at the MQM 107 drone while nearly simultaneously, a PAC-3 missile was fired at the inbound cruise missile target.

The PAC-3 missile launched at the cruise missile target achieved missile radar lock and destroyed its target. The MQM 107-target drone was similarly intercepted and destroyed by the PAC-2 missile. "Today's success continues to demonstrate the operational capability of our soldiers with the latest Patriot equipment", said Col. Tommie Newberry, project manager, Lower Tier Project Office. "This challenging mission is another step in the validation of the PAC-3 missile and its interface to the fielded PAC-3 ground equipment."

"Through you, the American heartland strikes back. And through your efforts, we will create conditions necessary for victory," Rumsfeld said.

B-2 crews have flown several sorties against Taliban and Al Qaeda targets inside Afghanistan since the military campaign began Oct. 7, Rumsfeld noted. The B-2 is a stealthy "flying wing" aircraft that has a two-pilot crew and a 6,000-mile range. Sorties from Whiteman to Afghanistan and back have taken 40 hours or more.

"Your mission is difficult and it is dangerous," he said. "Our enemies live in caves and hide in shadows. Finding them and rooting them out is no simple task. It will take patience, time and steadiness of purpose."

While praising wing members, Rumsfeld added that the terrorists who orchestrated the Sept. 11 assaults on the New York World Trade Center and the Pentagon represent a new threat against America and its ideals.

"Our people and way of life have come under an unprecedented attack by a new and dangerous enemy," he said. "Americans are grateful -- and proud -- to know that brave men and women stand ready to defend their freedom -- when it has been so brutally and violently challenged.

"On behalf of the president, and a grateful people, I thank you for all you do -- and do so well."

Rumsfeld said the terrorists want to scare Americans, so "we can no longer walk out of our homes."

"They want us to respond by curtailing our freedoms -- to withdraw -- terrorized. We will not do so," he emphasized.

Americans and other freedom-loving people around the globe must "either change the way we live, or we must change the way" the terrorists live, Rumsfeld said.

"We choose the latter, and you are the ones who will help achieve that goal," he added, noting that victory over global terrorism "means liquidating the ... networks and putting them out of business."

The B-2 is a $1.3-billion aircraft that has been in service since 1993. Whiteman, the Air Force's only B-2 base, is named after U.S. flier Lt. George A. Whiteman, shot down and killed in his P-40 fighter plane in defending Pearl Harbor during the Dec. 7, 1941, Japanese attack.