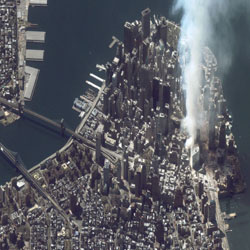 This one-meter resolution satellite image of Manhattan, New York was collected at 11:43 a.m. EDT on Sept. 12, 2001 by Space Imaging's IKONOS satellite. The image shows an area of white and gray-colored dust and smoke at the location where the 1,350-foot towers of the World Trade Center once stood. IKONOS travels 423 miles above the Earth's surface at a speed of 17,500 miles per hour. Larger Image 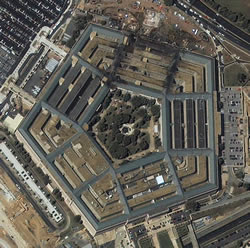 This one-meter resolution satellite image of the Pentagon was collected at 11:46 a.m. EDT on Sept. 12, 2001 by Space Imaging's IKONOS satellite. The image shows extensive damage to the western side and interior rings of the multi-ringed building. IKONOS travels 423 miles above the Earth's surface at a speed of 17,500 miles per hour. Larger Image

DoD Releases Initial, Preliminary Estimate Of Unaccounted
The Department of Defense announced today initial estimates indicate that approximately 126 persons remain unaccounted for in the wake of Tuesday's attack on the Pentagon.

Search and recovery efforts continue. Names of the missing will be released after next of kin have been notified. While the number is not expected to change significantly, this is only a preliminary, initial estimate, based on roster checks and other information.

These numbers do not include any of the passengers aboard American Airlines Flight #77.

The Comfort, normally kept in reduced operating status in Baltimore, sailed with a crew of 61 civilian mariners and 730 Navy medical and support personnel. One of only two Navy hospital ships, Comfort weighed anchor today and is expected to arrive in Earle, N.J., tomorrow to load additional personnel and supplies. The ship is expected in New York City on Sept. 14. 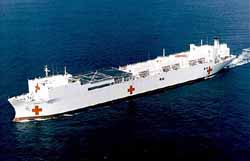 Comfort is 894 feet long, equal in size to one of the nation's five largest trauma centers. Because Comfort is specifically designed to provide emergency care to U.S. combatant forces deployed in war or other operations, Navy officials consider it an ideal medical treatment facility for the situation.

The ship is equipped with up to 1,000 beds, 12 fully equipped operating rooms, a medical laboratory, optometry lab, radiological services, a CAT scanner, a pharmacy and two oxygen producing plants. In addition, it has 80 intensive care beds, 20 recovery beds, 400 intermediate care beds, 500 minimal care beds and a helicopter deck capable of landing large military helicopters, as well as side ports to take on patients at sea.

Comfort joined the Navy fleet in 1987 and is a veteran of the 1991 Persian Gulf War and Haitian migrant rescue operations in the Caribbean in 1994. It also has participated in multinational exercises to improve cooperation in peace support operations.

More Than 4,700 Missing in Trade Center Disaster
(Reuters) - A total of 4,763 people were missing in the World Trade Center catastrophe, officials said on Thursday, while determined rescuers searched for any signs of life in the ruins of the twin towers demolished in a chilling attack at the nation's financial heart. [More...]

U.S. Transportation Secretary Norman Mineta said U.S. airports will be reopened and flights resumed on a case-by-case basis, only after they implement more stringent levels of security imposed following Tuesday's hijack attacks on the World Trade Center and the Pentagon. [More...]

Germany Detains Man, Probes Hamburg Link to Attack
(Reuters) - Germany has detained an airport worker in connection with Tuesday's U.S. terror attacks and three of the suicide hijackers may have belonged to a Hamburg-based extremist group, authorities said on Thursday. [More..]

In Final Clinton Days, a Chance to Attack Bin Laden Was Rejected
WASHINGTON  In the waning days of the Clinton presidency, senior officials received specific intelligence about the whereabouts of Osama bin Laden and weighed a military plan to strike the suspected terrorist mastermind's location. The administration ultimately opted against an attack. [More...]

As the U.S. Navy positioned ships off the coasts of Washington, D.C., and New York, the hospital ship USNS Comfort (AH 20) prepared to sail from its berth at Baltimore, Md., to embark Navy medical personnel at Earle, N.J., before setting sail for the coast of New York. Comfort has a crew of 61 civilian mariners and more than 700 Navy medical and support personnel.

Comfort contains 12 fully-equipped operating rooms, a 1,000-bed hospital facility, radiological services, a medical laboratory, a pharmacy, an optometry lab, a CAT scan and two oxygen-producing plants. The ship also has a helicopter deck capable of landing large military helicopters, as well as side ports to take on patients at sea.

In Norfolk, Va., USS George Washington (CVN 73) set sail in support of defense and humanitarian efforts off the coast of New York.

George Washington will respond to tasking from the North American Aerospace Defense Command (NORAD) in providing air defense to the city.

Navy and Marine Corps installations around the country are at the highest states of alert. They are taking increased force protection measures to ensure the safety of military and civilian personnel at these installations.

SECNAV Responds to Terrorist Attack at the Pentagon
The following is the text of a message released by the Secretary of the Navy:

America's naval forces share in the loss and sorrow of yesterday's attack. Our men and women in uniform, civilians and contractors were part of the nation's family that gave their lives for liberty, freedom and our way of life.

In the face of an unseen enemy and unknown dangers, the Pentagon's evacuation was punctuated by anonymous acts of bravery and kindness by countless Navy and Marine Corps service members and civilians.

In the days ahead, we will learn more about these attacks, will remain vigilant and will be prepared to carry out the president's orders.

We will spare no effort to protect the American people and support our commander in chief's pledge to bring to justice the terrorists who committed these acts and those who harbor them.

As we have throughout our history, our nation will overcome this tragedy and emerge with an even stronger resolve to our fundamental principles and values.

Rumsfeld videotaped a message to all members of the Defense Department today, just over 24 hours after a hijacked plane slammed into the Pentagon and two others destroyed the World Trade Center towers in New York.

"The human toll of this tragedy is being counted," he said. "Many in this building have lost friends and colleagues. We're doing all we can for the families of those who were killed or hurt. Our grief is beyond description. Our condolences go out to all those who have lost a loved one."

But the department has pride also, he said, "Pride in our service and in our country. Pride that in the morning 'the flag was still there.' 'The Stars and Stripes' was over the wreckage to mark their place of honor."

Rumsfeld expressed the department's gratitude to civilian firefighters, medical personnel and police who continue to assist DoD. He said he was proud of the way all members of the department behaved.

"It is my duty as head of this department to tell you that more -- much more -- will be asked of you in the weeks and months ahead," he said. "This is especially true of those who are in the field.

"The task of vanquishing these terrible enemies and protecting the American people and the cause of human freedom will fall to you -- the men and women of the Department of Defense. I know we are ready, I know America can continue to count on your selflessness and courage and dedication to duty."

He asked all members of the department to "stay the course in the challenging days ahead. The nation stands behind you."

Pentagon Open For Business
Approximately 10,000 personnel walked through the corridors of the Pentagon a day after what some are referring to as 9-1-1, the day terrorists crashed a jetliner into a wing at the Pentagon.

It was supposed to be "business as usual" Sept. 12, as directed by Donald Rumsfield, secretary of defense, but it was anything but just another day for the individuals who have no offices to report to, who are serving as guards or going through debris.

FOX television news reported that personnel were evacuating the Pentagon Wednesday (Sept. 12) at noon which triggered employees to exit the building. Shortly afterward, Pentagon guards stated it was a false alert but instructed individuals who were not essential personnel to go home.

One soldier who stands guard in the Pentagon to prevent people from walking in areas that have been damaged as a result of Sept. 11's terrorist attack, said even though he has been to Washington, D.C., numerous times, this was the first time for him at the Pentagon. SGT Brian Whitman, 200th Military Police Company, 115th Battalion, Salisbury, Md., is serving as a guard. Whitman's unit got the activation call soon after the attack. About 40-50 soldiers from his company were sent to the Pentagon to serve as security guards in the Pentagon hallways.

Pentagon hallways were full of guards and a strong smell of smoke, but the usually familiar sounds of small talk and shuffling feet were not there.

The clinic is located opposite of the crash site in corridors three and four.

"We had no physical impact," Brown said. "We didn't know it happened until patients started arriving at the doors. Immediately following this, the clinic implemented its mass casualty plan."

Within a short time, it was apparent that there were a large number of casualties, Brown said. Soon afterward, doctors, nurses and emergency medical technicians not affiliated with the Pentagon began showing up at the clinic to volunteer their services.

The volunteers were given blue-colored medical vests to give them the same access status to casualties as clinic personnel, Brown said. Most of the casualties that needed more treatment were taken to nearby Arlington Hospital.

For at least the next two hours, things were quite hectic as clinic personnel and volunteers scrambled to treat those wounded from the jetliner crash. Treatment continued at the clinic Sept. 12 as firemen, Pentagon workers and others sought treatment for minor-related injuries from recovery efforts.

"Today we are very focused on supplies," Brown said, explaining that the clinic is prepared for any new onslaughts.

It won't be until possibly Friday (Sept. 14) that the clinic resumes regular appointments, Brown said.

Pentagon Recovery Operations Continue
Search and rescue operations at the Pentagon, led by as many as 200 Arlington County firefighters and police assisted by a number of other jurisdictions, continue today. 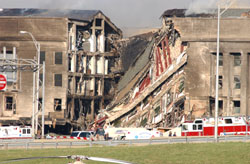 The area of the Pentagon where the aircraft struck and burned sustained catastrophic damage. Anyone who might have survived the initial impact and collapse could not have survived the fire that followed. When the aircraft crashed into the Pentagon, it reportedly was carrying several thousand gallons of jet fuel, which caused an intense fire in the immediate crash area.

Reconnaissance efforts conducted overnight indicate that there are no survivors in the immediate collapsed area. Listening devices that have been able to get in have proven negative, and it is doubtful that anyone in the immediate impact area survived.

Rescue authorities are planning to use a wrecking ball this morning in the collapsed section of the Pentagon to clear away unstable rubble so urban search and rescue teams can safely begin their search effort in adjacent areas. Stabilizing the building at this point will allow full search and rescue operations and ensure the safety of the teams as they go about their business. This decision was reached after joint consultations with county, state, federal and military authorities.

Air Force Responds To Terrorist Attacks
The Air Force is working around the clock to coordinate relief to victims of terrorist attacks that took place Sept. 11. Secretary of the Air Force James Roche contacted the Federal Emergency Management Agency immediately following the first reports of these attacks and offered maximum Air Force assets including personnel and equipment.

Additionally, the Air Force is assisting with the distribution of blood supplies to the locations where they are most needed. Locations of the staging centers are not releasable at this time due to security concern.