NVIDIA Out In Force At ECTS
NVIDIA Corporation will be taking pole position at this year's ECTS at ExCeL, London, from September 2-4. The company will be showing its full range of products based on GPUs from GeForce3, to the new Quadro2, and nForce, the new integrated architecture for PCs. In addition, NVIDIA will have a presentation area featuring talks from some of the entertainment industry's leaders. NVIDIA's Chief Scientist, David Kirk, will be presenting a Final Fantasy Technology Demo running on NVIDIA technology, the demo exemplifies interactive real-time 3D rendering on a standard computing platform. Also, in an ECTS EXCLUSIVE, Peter Molyneux, President and CEO of Lionhead Studios will be demonstrating the new mini sequel to Black & White, Creature Isles.

F4SuperPAK-G2i Agreement
The Falcon 4 SuperPAK project would like to continue their 'open book' approach in sharing their position and progress with the community. The group is nearly 200 members strong with more applying every day.

We have received the F4SuperPAK-G2i Agreement. Its Purpose: To generate an agreement between G2 Interactive Inc. (the current license holder of all Falcon 4 intellectual property) and the Falcon 4 community of developers which results in G2 Interactive allowing continued community-based development of Falcon 4.0 in such a way that the work of the RPG, eTeam, F4Alliance, F4Terrain, and other meaningful independent teams are brought into a single Falcon 4.0 version patch.

Major Influx Of Cash For Ubi Soft
Ubi Soft closed a syndicated loan for 130 million euros with a group of major French and foreign banks. This revolving line of credit has a maturity of three years with an additional two years extension. It is the largest credit line ever raised by Ubi Soft and will strengthen the company resources to finance its growth.

Commerzbank AG and Natexis Banques Populaires, the mandated arrangers, were joined by Crédit Agricole Indosuez and Crédit Lyonnais as co-arrangers to underwrite the entire facility. Eight other leading French and foreign banks subsequently joined in the general syndication.

Commenting on this new revolving credit line, Alain Martinez, Financial Director at Ubi Soft, said, "We are very pleased about the success of this important transaction. It gives Ubi Soft a flexible, effective way to finance its growth. It also shows the confidence our banking partners have in Ubi Soft's fundamentals."

Photo: Piper Saratoga, Sliced and Diced
PIPER GOES ON WALKABOUT: A hand-propped Piper Saratoga at Adelaide's Parafield Airport, Australia, started taxiing without the pilot and made a beeline for some kindred aircraft parked nearby on the ramp. The aircraft ploughed through four Piper Warriors before a twin-engine Piper Seminole finally stopped the offending relative by mere bulk. No humans were injured (physically) in the accident, but damage is estimated at $1.5 million. 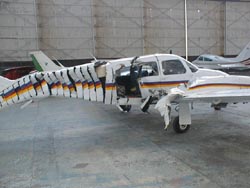 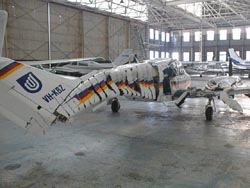 The accident occurred during a four-ship low altitude intercept-training sortie.

"As the next-generation ship self-defense missile, ESSM will be capable of defeating sophisticated missile and aircraft threats," said Louise Francesconi, Raytheon vice president and general manager of Raytheon Missile Systems. "We look forward to producing this important weapon system for the navies of the consortium nations."

ESSM is designed to protect Navy ships by destroying currently fielded and near-term projected anti-ship missiles, particularly those that fly at low altitudes and maneuver during their terminal flight phase. It includes a more powerful rocket motor and "tail control" technology with an improved SeaSparrow guidance section to provide a dramatically improved overall missile performance.

CIA Official Says Missile Threat Is Accelerating
The possibility that a long-range ballistic missile tipped with a weapon of mass destruction may be used against the United States, its armed forces, or its national security interests "is higher today than it was during most of the Cold War," a senior US intelligence official says.

The missile threat "will continue to rise as the weapons and missile capabilities of potential adversaries mature," John McLaughlin, deputy director of the Central Intelligence Agency, said last week at the 4th Annual Space and Missile Defense Conference held in Huntsville, Alabama.

McLaughlin said that over the next 15 years the United States is most likely to face long-range ballistic missile threats from North Korea, Iran, and Iraq, as well as the continued longstanding threat from Russia and China.

"The emerging missile threats from countries like North Korea, Iran and Iraq will be not only fewer in number [than the former Soviet ones], but lower in terms of accuracy, yield, survivability, reliability, and range-payload capability," McLaughlin said. "That said, these new systems will represent a real threat."

McLaughlin said countries pursue intercontinental ballistic missiles (ICBMs) as tools of coercive diplomacy, deterrence and blackmail, despite the fact that the acquisition comes at the expense of often-scarce resources and other needs.

"The strategic value of ICBMs would come chiefly from their mere possession and from the very possibility of their use," he said. "To be sure, the actual use of an ICBM might bring devastating consequences -- a reality no foreign government can ignore."