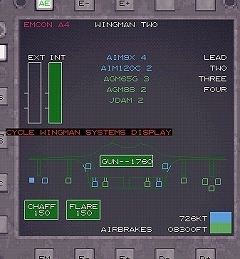 The patch is done! The lads at DiD have also added support for the new generation of V2 boards. To download the patch click HERE.

As many of you know, DiD have increased both ground detail AND frame rate under both Glide and Direct3d... good news! And under V2 this thing REALLY flies! Add to this GTT's Air Combat Designer and we really have a new sim to play with. Now that the DiD team can leave the patch behind, look for an update on TAW soon.

The significance of the patch changes goes far beyond ADF, of course. Changes made now will also continue into TAW and become even more important in that setting. Why? Simply because in Total Air War, with its dynamic campaign engine, your performance in one mission will impact all subsequent missions. Your success or failure becomes a great deal more critical when the next mission flows directly out of the previous one. Lets take some examples.

Say you've been assigned a deep strike mission with a single wingman. Stealth is critical because if you aren't stealthy you will never make it to your goal. But lets say you choose an external weapons load so that you can carry some additional stores in case you or your wingman don't make it to the target area. This increases your RCS and thus the chance of your being detected and intercepted.

Consequently, any changes that contribute to your ability to successfully prosecute the enemy are good now and even more important later. There are a number of these changes in the patch, and they do indeed increase your chances of success, and they make ADF more fun!

The key changes that improve your chances of success are these:

Of the changes listed, the top two are the greater effect of chaff and flares and the reduced RCS of the F22 when "clean." The next two most significant changes are probably the increased fire delay of SAMs and the reduction of cannon rounds for enemy aircraft.

Lets face it, the unpatched version of ADF did not really give us a stealthy aircraft. It was more obvious in some missions than in others, but even a clean and slow aircraft was often intercepted at a significant distance from opponents. Obviously we were visible to the Russian AWACS. (Its interesting to note that in iMagics first release of iF22 the radar signature of the F22 was 1/50 that of an F15 and the adjusted RCS in the later release is 1/100th that of an F15. The ACTUAL signature is closer to 1/1000 that of an F15).

The reduction in RCS is significant. You can approach to within visible range of enemy aircraft without detection, although if you are in the front quarters at less than ten miles you are still subject to the Mark I eyeball. But ADF is WAY more fun this way and your chances of survival, if you are cautious, are greatly increased! The fun factor is primarily that you can usually get on the tail of a bandit without being detected.

If you ARE detected, perhaps when you choose to engage multiple targets and aren't immediately successful, your decreased RCS is still an advantage. And if you get into a knifefight, a number of changes become important. First, the enemy now has realistic cannon rounds. Second, your ability to spoof enemy missiles is enhanced. Third, you won't be padlocking objects outside visual range. Fourth, the aspect marker is now correct when you are tracking a target over your shoulder. Fifth, if you are engaged you will see the missile at a greater distance. Finally, if you are engaged by ground defences you have some reaction time and your reduced RCS again becomes significant.

As you can see, these changes are VERY important and they do make ADF more fun. Having greater success is more fun in itself, but the tactical game has suddenly got new life. I have to confess I was becoming discouraged pre-patch but have renewed interest in ADF, which has also increased my desire to see TAW! My tactical decisions have changed also, and choosing to engage or to remain stealthy has become a significant option. Its very different to have this feeling in ADF. If you have multiple bandits to deal with you can set up your approach quite differently (remember to go to manual EMCON), and when I choose to go to AUTO EMCON and engage my adrenalin suddenly kicks in! I like it!

Other changes become significant for success when you do choose to engage air or ground targets. As above, your reduced RCS is significant, and your enhanced countermeasures are also important. But equally significant is the addition of a blast radius to your weapons. You no longer have to make a direct hit with cluster bombs to kill some targets, and likewise with all other A2G ordnance. Your pin-point accuracy is no longer critical, and in fact one weapon may now do a lot more damage.

On the other hand, watch out if you are too close to an exploding weapon! Drop those LGBs from two hundred feet or get too close to a target when it goes up and you may go up with it! I have taken damage that I didn't expect post patch, although I have yet to lose my aircraft entirely!

Speaking of which, you won't be riding the silk quite as much and you won't be a statistic quite as often either. Your MFDs won't all disappear in one unhappy chorus as often when you take damage. The damage model has been tweaked and the changes are good ones! 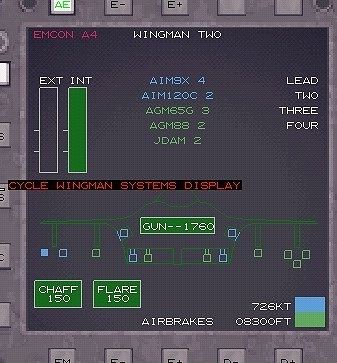 Finally, the other change that I have found very useful is the ability to check my wingmans status in detail. You get the full meal deal at the flick of a switch! As you can see from the shot above you get the at-a-glance graphical display as well as a status list on the right. If your wingman shows in RED you know he is in trouble. YELLOW signals that he has taken damage. His loadout is immediately obvious as well. You won't be ordering him to engage a target at 25 miles when he is winchester on AMRAAMs.

Following is a more complete listing of changes including new support for D3d cards.

The following graphics cards are now supported under Direct 3D in addition to the cards supported in the initial F-22 ADF release. Please note that graphical anomalies may periodically occur on some of these products due to driver and hardware problems.

The following changes have been made to the multi-player section of the game. 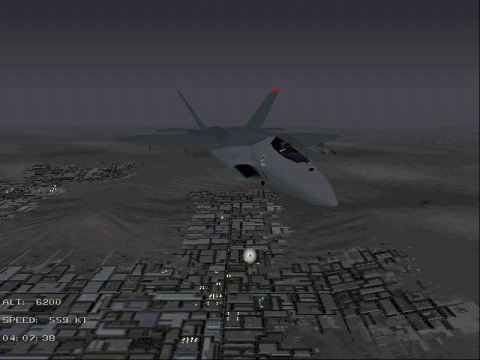 Other Fixes and Enhancements: