Many of you are aware of the Random Mission Generator created by Mark Hermonat of Hermonat Software. The RMG gave us the ability to whip up a quick mission instead of going through the time consuming process of creating new missions once we had completed all the missions that came with SU-27 (and later version 1.5), or just needed a quick "kill fix".

GAME TOOL TECHNOLOGIES worked with Hermonat Software to bring us the "DYNAMIC MISSION DESIGNER", a "generational improvement" of the RMG written in 32 bit code for Win 95. We covered the Su27 DMD in a recent article, and we also discovered that GTT had some big plans so we asked for an interview. Here is the interview with Eric Joiner, Senior Partner of GTT. 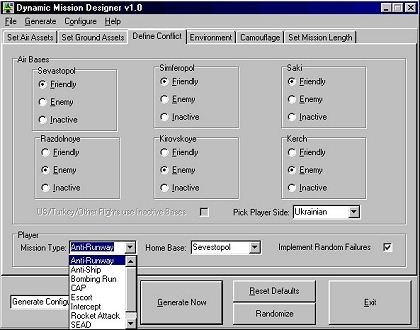 Csim: Thanks for taking the time, Eric. I think you are well known for your contribution in the sim community, but tell us a bit about yourself.

Eric: You are welcome. I've been interested in gaming and especially flight sims for several years. I've always been an aviation buff and the sim genre is engaging both mentally and imaginatively in a very unique way. My professional interests are in web development, graphic art and in game related programming.

My experience in the after-market end of flight sim gaming dates back to the original Tornado Command and Staff College and its related addons. Two partners and I were involved in that. I am proud of the fact that we contributed to the gaming play enjoyment of what I still consider the best air to ground sim ever made.

Csim: What are your favorite sims at the moment, and why?

Eric: Big question. Lots of "stuff" out there right now with a ton more coming. I personally think that Longbow 2 is in a class by itself with both Hornet Korea and F-22 ADF both having tremendous emotive potential. LB2 is very deep both programming logic, AI, and accuracy. As a developer and lead guy for our GUI interfaces, I am very impressed with the LB2 front end. ADF enjoys these same qualities coupled with DiD's legendary graphics. Hornet Korea has potential to become great if GSC continue to develop it. My personal "can't wait" sims however are Janes F-15 and Su-27 2.0. For me personally, its depth of game play that keeps me interested.

There are some markets that I deeply wish "somebody" would address namely why hasn't anybody done an F-4 Phantom II sim? Over 30 years of service, multiple services in multiple countries, in roles ranging from Wild Weasel to Air Demonstration teamsIf I had one dream wish, (besides a new Tornado sim), it would be for an F-4 sim...frankly I am a bit tired of the F-22 and the F-16. Give me the century series fighters or a Phantom!

Csim: How did GTT get started? Is the Internet an important factor?

Eric: Terry Goldman and I started Game Tool Technologies in 1995. Terry lives in California and is our lead developer. He is the technical director in our little group. Terry works for a defense contractor so his interest in the flight sim area is a natural.

Interesting that you ask about the Internet. GTT is a virtual firm. Of the 3 primary players, none live in the same city. I live on the US East Coast, Terry lives in the Bay Area of San Francisco, while Mark Hermonat lives in Canada!. Without the net, there would be no GTT. GTT develops applications not only for the Gaming community but for the Internet as well. The Net is an extension of the virtual world, so its tie in to gaming is not unexpected.

We distribute our products through the web and pass both source code and ideas by email. Again, without the net, no GTT. The Internet gave us the opportunity to shrink geography to the size of the screen. To me its an amazing marvel.

We're currently examining some new push technology linkages between Flight sim gaming and the internet. Can't go into detail right now, but we Are studying ways to get your virtual world expanded beyond your desktop and to let gaming companies feed your simulations in a constant stream. Simulations need to be evolutionary in growth, not static in versions. We're Currently looking at how to make that process happen. The Internet and Gaming are our two core business interests.

Csim: Who are the principals and what is their experience in the sim world?

Eric: GTT has 3 main players. Myself, Terry Goldman, and recently we added Mark Hermonat to out team. Terry is the Technical Director for GTT. He has primary responsibility for all technical matters related to programming and the management of our relations with game maker technical staff under our NDA agreements. I handle development of our GUI interfaces, beta test programs, external marketing and the web. I also tend to be our main "voice", though both Terry and Mark are involved in that area as well and could easily be the ones you're interviewing now.

I'm delighted that Mark Hermonat joined us in December of 1997. Mark was the developer of the popular "Random Mission Generator" for Su27. That freeware application was the core seed and generational predecessor to our Dynamic Mission Designer application for Su27. Marks role currently is to oversee our F22:ADF product development as well as portions of our Hornet Korea stuff. Both Terry and Mark are keen flight sim pilots. GTT is fortunate to have some unique synergies that come from our mutual enjoyment of gaming for entertainment as well as business. 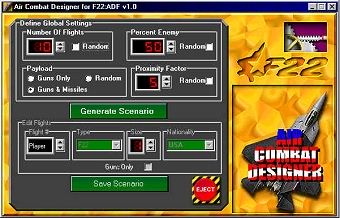 Csim: The first project of GTT was the dynamic mission designer for Su27 which we covered a couple of weeks back. Tell us about this new project for F22: ADF.

Eric: Well, the first project of GTT was a very popular product for Internet use, called NetTools. We released it in 1995.. Still a very popular download. DMD for Su27 is one of our latest gaming related projects, though not the only one by long yards. Currently we've got a number of products coming on stream. We're picky about what we like though. We're developing applications right now to support F22:ADF and Hornet Korea at the moment, though as soon as we get our hands on F-15 =)

As you are releasing this interview, GTT will release its latest product that is called "F22- Air Combat Designer". ACD is designed to allow the instant creation of air to air missions for F22 ADF. (See the end of this interview for the download). We released it as freeware because in thinking about a more extensive "DMD" type application for the F22 sim, we thought that this smaller app would provide a uniquely functional demo application containing a fraction of what the real Dynamic Mission Designer for ADF will contain. ACD is a free standing application, but the DMD to be released later will contain all the Air Combat Designer stuff and more.

Secondly, but perhaps more importantly, we wanted to contribute something to the flight sim community that was commercial grade in quality but free to use. You will note that ACD also sports a unique graphic user interface. All our GTT apps will be designed this way from now on. We want our applications to have a unique look and feel that instantly matches the quality and style of the application with our brand name.

Csim: Even though your desire to give something back is terrific, there must be a lot of time and energy in this project!

Eric: We support the shareware concept on our commercial grade products as a very effective distribution channel for a firm our size. The Internet allows us to share our products internationally with very little overhead. What overhead we do have is covered by our reasonable registration fees for our software. GTT is a labor of love, certainly not money, at this point. However our reputation for quality product development has opened some doors with the major development houses and given us access to file layouts and source code. Without that trust and cooperation, our job would be much more complicated.

Csim: Tell us about "Air Combat Designer" for F22 ADF. What can it do? What are its limits?

Eric: Air Combat Designers primary purpose is to generate air to air missions for F22 Air Dominance Fighter from DiD. Its limits are self imposed, in that we only made this little application for a demonstration of what's to come. Probably by late spring, a full Dynamic Mission Designer will be available.

F22 ADF has one of the more interesting file structures of the sims We've looked at. Its possible to do some very complex things with a custom Mission design tool such as what we have in mind for DMD ADF. I can tell you that Mark Hermonat, who is leading our F22 ADF team, is very excited about the possibilities... at least our discussions lately have been full of promise along those lines.

GTT has a ton of work on its plate. Hornet Korea fans won't be disappointed either. based on what we're seeing now, the creation of an Air Combat designer for H3K is going to be the initial product, again probably as freeware with a full DMD style app behind it. My personal interest is in expanding the network theatre possibilities in that one. Hornet Korea products and F22 ADF are going to be developed in tandem.

Csim: Seems to me that there is a great need for this kind of aftermarket product, but maybe there shouldn't be? What do you think?

Eric: Well, ideally, it would be great if games were perfect in every way. However game makers make pragmatic choices relative to what variables they can reasonably expect a wide audience of gamers to enjoy. Feature lists can be never ending. Most do a great job of giving us a great entertainment value while simulating the operation of some high performance aircraft.

However, because these kinds of games engage the emotion of players, it is very common for people to say "wouldn't it be great if" Some very good ideas come out this way that the developers initially didn't think of. Some firms are good at listening to their customer base and adapting future versions to meet these needs. Others don't do it so well. In both cases, GTT reaches out to meet those after-market needs by creating tools to allow gamers more flexibly enjoy their gaming experience. The day that all gaming firms release perfect, long running games that meet all the needs of all the player, we'll happily shut the virtual doors of Game Tool Technologies. But for the time being, I think we're safe.