Who says that realism must be compromised to produce a marketable simulation? Shrapnel Games and eSims say that such a compromise is not necessary and are setting out to prove it with their modern tank sim, Steel Beasts. Steel Beasts models the American M1A1 and the German Leopard II. The orientation of the sim is towards crucial aspects of modern armored warfare. By concentrating on essentials and realism, the developers may have found a way to satisfy hard-core gamers while entertaining the more casual customer. 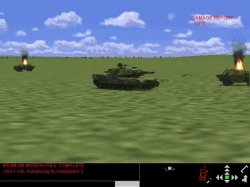 This paring-down to the essentials begins by restricting playable vehicle positions to the tank commander (TC) and gunner. External and map views are also necessary for play but are really a function of the TC. The player no longer has to worry about playing loader and radioman; the purpose of a tank is to move and shoot and Steel Beasts zeros in on this.

The TC can do everything from his position. He can issue driving orders from and on-screen control or use the venerable W,A,S,D,X configuration. Significantly, the clumsy "hull-down" problem has been solved with a single E command, letting the invisible driver do his job. The TC can also micromanage movement through a point-and-click mechanism. However, the key to movement lies in the map view. The payer creates reference points and checkpoints with routes to and from. Each route can have up to five tactics governing the actions of the tank if it comes across an enemy. A route also has delimiters for fire discipline and defensive posture. Checkpoints can also store new routes and tactics. 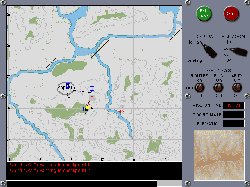 Fig. 2. Moving along the route

The TC has other things to do than backseat drive. He designates targets and ammo for the gunner, overriding the gunner when necessary. He also calls down available artillery fire if available, using the map view to adjust the splashes. Artillery can deliver the FASCAM minefields and the deadly improved conventional munitions (ICM) as well as high explosive and smoke. He can also give formation and fire orders to other tanks and some other platoons. The designers make a wise choice in limiting the TC's command; a battalion commander can't command his own tank. For grins, he can also use a .50 cal. to hose silly grunts who don't know when to give up.

As important as the TC is, players will be tempted to play gunner. Steel Beasts goes into great lengths to show the details and difference of the M1A1's and Leopard's gunnery systems. Gunnery seems easy at first. Lasers set the range, computers calculate leads on moving targets, thermal imaging can spot the bad guys anytime, anywhere and hydraulics stabilize the turrets to insure a stable gun platform. Where's the challenge? Well, these whiz-bang technical gizmos tend to fail, especially when the vehicle has been hit.