Note: (This review is of the patched (v1.11) version of Space Empires IV. The patch squashes a couple of bugs and added even more weapons and planet facilities to the game.

There's a light side and a dark side to Space Empires IV (SEIV).

The light side is that it's a cracking good game - so good, in fact, that after I spent until 7AM playing it, thinking it was still only 2AM, my wife and I agreed to put it into the category of "Games So Good I Deleted Them And Gave the CD To My Wife So I Could Eat And Sleep". It's a fun, addictive, well-designed game.

The dark side is that the documentation is... "lacking".


Longer and wordier:Space Empires IV, a 4X game (eXploration, eXpansion, eXploitation, eXtermination) written by the one-man-show of Malfador Machinations and published by Shrapnel Games, is available only from Shrapnel's website (http://www.shrapnelgames.com/). There is a downloadable demo. You can play 100 turns with a limited tech tree, which is enough to give you a good taste of the game. The graphics are not spectacular, but they aren't ugly either. You won't be able to show off your new graphics card with SEIV, but that also means you don't need a new graphics card to play it. The AI is not brilliant, but it puts up a fight and may occasionally surprise you. Once you find the AI is too easy, you can go out in search of human opponents for email games. 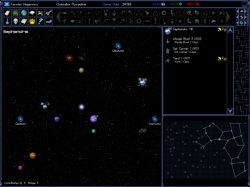 
As in other 4X space games, players must build up an empire and expand across the galaxy (well, in actual scale it's more of a local group of stars, given that it's less than 300 or so stars). Systems are connected by warp points in a semi-random net. Each system is represented by a 13x13 grid of spaces, on which the players maneuver fleets, and on which sit the various planets, asteroids, and stars. Some systems contain no planets, some contain no star, only a nebula or a black hole. (With advanced technology, a player can create or destroy warp points, planets, stars, nebulae, and black holes. Ringworlds and Dyson Spheres are also possible. They're cool, but they come late enough in the game that they aren't much use - unless you opt to start the game with all technologies known!) Finally, when opposing forces meet in space, the game moves to a sprawling 2D map to resolve tactical combat. The three levels of focus (warp line junction nets, systems, tactical combat) tends to give the game a strategy - operations - tactics flavor, which I rather like. 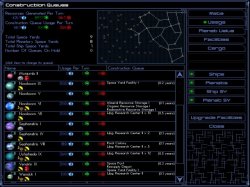 
Ship Design and Tech TreeShip design is somewhat reminiscent of the boardgame Starfire (the designer credits Starfire as a major source of inspiration), and there are boatloads of possible components. 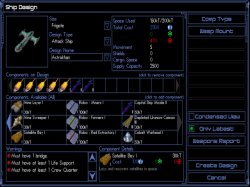 
The tech tree is large and sprawling, though without any especially complex interactions between branches. Most widgets lead to other gadgets in an obvious manner. The downside is that the nature of the widgets is not always terribly clear from the descriptions, or from any of the files provided in lieu of a manual. Experimentation will usually make matters clear, but not always. The patch clarified some of these descriptions, showing which facilities did not "stack" (those which did not produce additional bonuses when built multiple times in a single place). 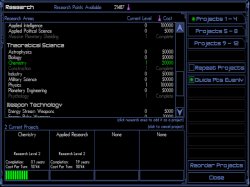 
Combined with the ship design, the wide variety of tech components is one of the major strengths of the game. No one ship can do everything well. Fighters kick serious ass if the target fleet doesn't have point-defense weapons (and PD weapons help a lot against missiles, too.) A fleet optimized for ship to ship combat may be toast when it runs into a minefield. Players without the time to build fleets of ships might opt for the cheaper satellites (essentially mines with weapons instead of warheads). You'll note I keep saying "fleets", not "ships", and this is deliberate. Since no one ship can do it all, you will probably need to make different ships for different tasks. 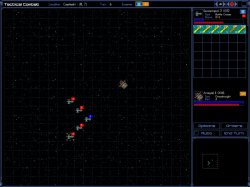 To drive the enemy before you...