Dark Reign 2, developed by Pandemic Studios and produced by Activision, is a fully 3-D real-time strategy game that serves as a prequel to Dark Reign, a game which had an excellent interface and several innovative concepts but lived in the shadow of Starcraft and Total Annihilation, which came out around the same time.

Dark Reign 2 finds itself in a similar position now, as 3-D RTS games flood the market just as their 2-D fathers did before. But now is as good a time as any for my confession, which is that I havent played any RTS seriously since Starcraft. So I cant compare it to Earth 2100 or other games of the current crop. On one hand, that hurts the value of this review, because reviewing often consists of comparing a game with games of the same genre; on the other, it means I am something of a dispassionate observer. 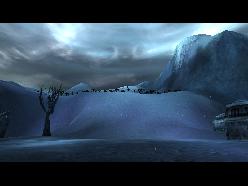 
DR2s plot consists of the usual battle of jackbooted fascists against longhaired freedom-loving hippies, and is played out on Earth in an area that resembles Los Angeles but has weather patterns more like Seattle. The former role is played by the Jovian Detention Authority, an oppressive police force that has usurped the civilian government and expelled the unwashed masses to the Sprawl, the area outside the privileged citizens pristine and heavily fortified Domes.

The rebels banging on the door of this gated community gone mad are the fractious Sprawlers, several gangs tied together in an uneasy alliance. The JDA and their kind have done grievous damage to the environment by causing eruptions of the energy-rich silicon isotope Taelon. Now Earths biosphere is falling apart and both sides want to get off the planet before it becomes uninhabitable.

The JDA campaigns plot revolves around the recovery of technifacts which will allow the construction of a portal to make their escape. In the Sprawler campaign, they mount an assault on the Dome and try to gain access to this portal. The campaigns can be played in any order since the events in them are happening simultaneously, and in fact things made the most sense to me when I alternated sides as I advanced through the game. As a whole, however, the campaigns were not too big on story development or characters.