PG II has had an overhaul and has added a few new features. Lovers of the genre or followers of this particular game may decide its worth the investment. But Im not sure that all gamers will feel a new purchase is justified.

The basics of the game are mostly the same, even the unit stats. Scenarios are a timed fight for victory point hexes; campaigns are a series of scenarios that flow in the various probabilities of World War II. The players success or failure is determined by his/her approach to a scenario. Failure the first time through means a different tack the next time, experimenting with differnent combinations of units.

Where PGII IS new is the graphics engine. Ya gotta admit, it looks a lot better than the old version. Maps are hand-drawn to scale and are loaded with detail (the full meal deal). Personally I think its a great improvement. Unruly graphics have put me off from many strat/war games in the past. The problem is that this new look sometimes gets in the way of the game itself.

For example, the Norwegian geography looks great, but how do you know which hexes are actually forests and mountains? In other cases cities are nicely detailed and aircraft look cool sliding over the terrain. What confuses is that there are different graphics for units depending on which hexside they face, despite the fact that facing is irrelevant in the game itself.

Other changes are small but add up to additional depth for PGII. Units develop leaders, ranged fire crosses open hexes, bridges can be blown, and aircraft have discarded their fuel limits. In this new game tanks overrun weakened units, and supporting units can go much farther. Ranged fire is an interesting addition since it gives advanced tanks an advantage in open terrain. In the same way, now that artillery extends its support to greater ranges its impact on the progress of a campaign is far greater.

The more noticable weaknesses include too much emphasis on icons. And its frustrating to find that important information is often buried, requiring a couple of mouse clicks to get at it. Some players are going to like the full-screen view, but if you linger there too long you are heading for trouble. It really is useless when you need to keep watch over the details. Perhaps SSI can work with this view by adding more information in pop up boxes or along the screen bottom.

On a fast Pentium lack of speed options become a problem. The turns can flash by too quickly on a P200. This wouldnt be a huge problem if there was a reliable way to view past turns, but the VCR function was left out and the replay doesn't work. This also means that play-by-email games are history.

Judge for yourself whether this is a holiday bargain for you. If you really like the new graphics and the few tweaks, you might want to check it out. But if you have an older machine anyway and are more into the strategic side of things, keep your old Panzer General or take a look at Steel Panthers II.

When Steel Panthers arrived on the scene it made quite a hit (no pun intended). The new game covered World War II at the level of the platoon/single vehicle, and its attention to detail quickly became renowned. In a marvelous balancing act, Steel Panthers blended careful physics detailing with great graphics and a friendly interface. In a game with a lot of depth, it made gameplay fairly easy while you paid attention to other matters, like winning! 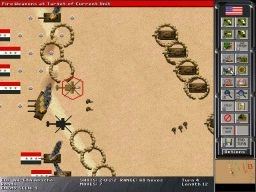 The tool bar on the right side allows you to issue extensive orders to your tank, aircraft, infantry and artillery units. You can play as unit commanders, issuing orders to one unit, and all other units in the group recieve the same orders. Since you can control close to a hundred units, this ability simplifies and accelerates gameplay considerably!

The full title of this game is Steel Panthers II: Modern Battles. The battles of note run 1952 to 1998, right through the Korean War on to theoretical incidents with China and every possibility in between. Enough breadth for most wargamers, I would think!

Now consider what this means: realistic modeling of 50 years of weapon systems, and not just air to air and not only one air or ground platform but HUNDREDs of systems! This was one ambitious project. Enough time and effort has been put into the AI that you can learn a great deal about tactics and the effects of various systems in a couple of weekends of play.

Now overlay this with careful scenario building, and you have the ingredients for some main fun. Steel Panthers II six campaigns and a few dozen scenarios. And you wont be limited to only scenarios involving the US military here: this game is diverse in scope and there are plenty of tempest in a tea pot altercations featured.

For example, the Arab/Israeli conflicts are here and even the rather odd Toyota truck war between Libya and Sudan! Wow, like I said, its all here. If that werent enough, how about a powerful scenario builder that gives you access to a database covering most of the world's armed forces. Talk about the kitchen sink! You were intrigued by the Newsweek report you read last week? Go ahead, get all the background details you can muster and play it out with a friend. Too much! 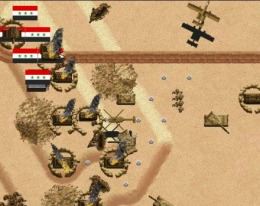 As usual there are a couple odd bugs in the garden, but various patches have addressed the important ones. AT this point there is little worth worrying about, and Steel Panthers III will address the wish list of most of the hard-core crowd.

In summary, Steel Panthers II is a winner by any estimation. It looks good, sounds good and feels right. Better yet, its a lot of fun and an immersive wargame. The interface is simply enough that even beginners can get involved quickly. The tutorial is nicely done and will help you get started. The video cut scenes will help give you a feel for the action. And if you find a friend who also has the game, you can even play by email! One caveat: try this when you can slot a couple of hours, because you wont want to quit!

Command South Korean forces in this hypothetical invasion of South Korea by forces of the North. Halt the Communist tide in an attempt to save Seoul. If you have the campaign disk you can also download a new campaign FREE (Bulge 1999):

The same easy interface that graces Panzer General II is found in Pacific General. Pacific General is, as the name implies, ready for naval action. With a new look and new music, it seems like an entirely new package. While it does have some variations unique to itself, in many ways it is very similar to Panzer General as a product.

The new look, that Japanese wood and paper thing, is nicely done. But the music is really the atmosphere grabber in Pacific General. As music from the era, it captures the feel of the time in big band and swing tunes. SSI also spruces up the production with radio broadcasts from Japan, Russia, and the U.K. I know, you usually turn the music off, right? Only Flying Corps and Pacific General make use of my midi device while in game play.

Pacific General also shares the new friendly interface of Steel Panthers II. Icon bars drop down on either side of the map and units have pop-up menus, which means that your view remains unobstructed until you need information. New rules are also in place, such as a bonus for massed attacks and night conditions. Special attributes also accrue to certain units, such as banzai abilities, sonar and radar.

Many players will find a big attraction in the scenario builder. Adding endless replayability and "what if" value, you can try out different tactics with a variety of force compositions and settings.

Multiplayer capability is also in place. This capacity combined with the scenario builder is the real backbone of the game. Playing against human opponents not only increases the level of challenge but adds a whole new twist with the unpredictable nature of human intelligence.

Its puzzling, however, that the emphasis seems to be on land based battles. There are some significant rules around capital ships and carrier ops, but the feeling of this kind of warfare isnt a lot different from the feeling of warfare in Panzer General. For some reason the tactical dimension is underdeveloped, with forces lining up as though along a battle front then slugging it out. In some of the scenarios the ships are rendered almost useless, with armies clashing inland while naval units twiddle their thumbs. And for some odd reason, there is no save option available at the end of your encounter....

On the positive side, SSI offers good support for all the games they produce. There are new Scenarios for Pacific General, and you can get them now: