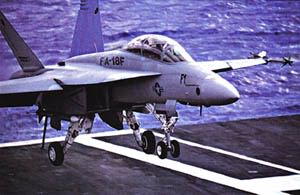 The multi-mission F/A-18E/F "Super Hornet" strike fighter is an evolutionary upgrade of the combat-proven night strike F/A-18C/D. The Super Hornet will be built by the McDonnell Aircraft and Missile Division of the Boeing Company.

The F/A-18E (single pilot) and the F/A-18F (two pilot) will replace the F-14 Tomcat, the F/A-18A/B, and older F/A-18C/Ds, and could be configured to replace the EA-6B. It will operate from the nation's aircraft carriers, which move into harm's way in international waters without the need for permission of host nations. All land-based forces, including land-based aircraft deployed on foreign soil, require the approval of their host nations.

The U.S. Navy believes the F/A-18E/F Super Hornet is "the right airplane at the right time." Potential enemies will learn it is hard to find, hard to hit and hard to kill. The F/A-18E/F program is on cost, on schedule and on budget. The aircraft remains over 800 pounds under specified weight. (See also our interview with a Finnish F18 Pilot)

With the release in 1997 of iF-16 and iF-22 it seemed a natural move to return to Carrier operations with the latest and greatest incarnation of the F/A 18 Hornet. While the F-14 Tomcat will remain a favorite for many of us, the F/A-18E is more useful as the basis for a comprehensive simulation since it has both air-to-air and air-to-ground capabilities.

iMagics coming simulation has been named iF/A-18E Carrier Strike Fighter. With a number of ex- military fliers on the test team (including Jim Harlers A6 Intruder experience) and with careful attention to detail, iMagics coming sim should please the hardcore crowd while remaining accessible to less demanding gamers as well. iMagic will include in-flight refueling in this simulation, adding a new challenge to the experience.

Going beyond Graphic Simulations latest release, the new game uses essential elements from the engine that powered iF22. Yes, this means a fully dynamic campaign engine, recently named the TALON (Total Air and Land Operation Network) system. The advantages of a dynamic campaign over the system used in FA-18 Korea are legion, and anyone familiar with EF2000 or iF22 is already aware of the difference. Unpredictable and incredibly varied mission scenarios and greater replayability are one result, while a richer and more interactive environment complete the picture. 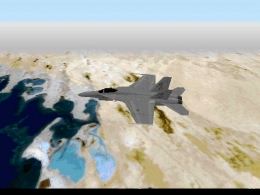 As for graphics, the DEMON terrain engine, criticized by many, has received some upgrades and should be both faster and more pleasing to the eye at low altitudes. Unfortunately DEMON II is not yet complete, but combined with meticulous attention to detail in flight and avionics modelling and full blown carrier operations, its doubtful whether many will care!

Six of us left for Pax River on Monday afternoon. We took a mix of marketing, artists, programmers and producers. Wild Bill arrived there late Monday night. We checked in with the McDonald-Boeing rep, Frank Monterelli, early Tuesday morning and he got us signed in and passes issued. We got a quick tour of the base and went to the Manned Flight Simulator Facility. Since Pax is a test and evaluation base, this facility is designed to test various a/c flight control systems and other advanced systems. For more, go to Jim's Holiday at Pax River

In iF/A-18E virtual pilots can take on the role of either Flight Leader (the typical ability to control wingmen) or Squadron Commander (the broader role of planning missions and managing pilots, aircraft, and supplies). Managing limited resources will also add to depth of game play. 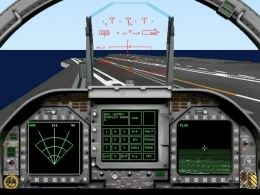 Will the F/A-18 E carry the LANTIRN package? Naturally, and perhaps iMagic will simulate the LANTIRN 2000 upgrade which adds these improvements (including 50% greater stand off range): 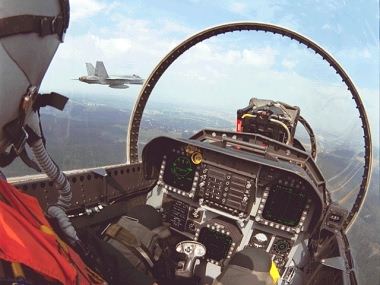 An all-weather fighter and attack aircraft. The single-seat F/A-18 Hornet is the nation's first strike-fighter. It was designed for traditional strike applications such as interdiction and close air support without compromising its fighter capabilities. With its excellent fighter and self-defense capabilities, the F/A-18 at the same time increases strike mission survivability and supplements the F-14 Tomcat in fleet air defense. F/A-18 Hornets are currently operating in 37 tactical squadrons from air stations world-wide, and from 10 aircraft carriers. It is proudly flown by the U.S. Navy's Blue Angels Flight Demonstration Squadron.

The F/A-18 demonstrated its capabilities and versatility during Operation Desert Storm, shooting down enemy fighters and subsequently bombing enemy targets with the same aircraft on the same mission, and breaking all records for tactical aircraft in availability, reliability, and maintainability. The aircraft's survivability was proven by Hornets taking direct hits from surface-to-air missiles, recovering successfully, being repaired quickly, and flying again the next day.

All F/A-18s can be configured quickly to perform either fighter or attack roles or both, through selected use of external equipment to accomplish specific missions. This "force multiplier" capability gives the operational commander more flexibility in employing tactical aircraft in a rapidly changing battle scenario. The fighter missions are primarily fighter escort and fleet air defense; while the attack missions are force projection, interdiction, and close and deep air support.

The F/A-18C and D models are the result of a block upgrade in 1987 incorporating provisions for employing updated missiles and jamming devices against enemy ordnance. C and D models delivered since 1989 also include an improved night attack capability. The newest models, the E and F were rolled out at McDonnell Douglas on Sept. 17, 1995, and are currently undergoing further testing at the Patuxent Naval Air Station in Maryland.

Right. The F/A-18E Super Hornet, the Navy's newest strike-fighter aircraft, conducts its first in-flight tests while loaded with ordnance on Feb. 21, 1997. The Super Hornet took to the air from Naval Air Station Patuxent River, Md., with two 2,000 lb. bombs, two AGM-88 High-Speed Anti-Radiation (HARM) missiles, and two AIM-9 Sidewinder missiles. The Super Hornet will replace the A-6 Intruder and is the programmed replacement for the F-14 Tomcat air superiority fighter. Super Hornet is fully capable of conducting both air-to-air and air-to-ground combat missions.