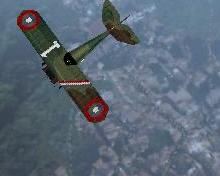 Click the above for a full size screen shot... 20K each.

In late January Rowan released an incredible WWI simulation with a new graphics engine and some of the best force flight models yet designed. However, for some would be pilots with older equipment, the graphics engine was too demanding. Rowan is about to release an update for 3d hardware that INCLUDES Force FX support. Here is a look at the final patch.


Yes, the 3d hardware update is finished, except for adjustments for the latest release of DirectX. These screens, taken today, look PHOTO REALISTIC, and the difference IN SIM is quite stunning. Don't let the shots fool you, however, it really is this BEAUTIFUL. The feeling I get in sim is reminiscient of my early days in EF2000. I had a hard time convincing myself that graphics had finally achieved so much.

3dfx based boards can be used at 640x480, however on a 4Mb Rendition card the resolution must be dropped to 320x240 to avoid "texture swopping" when flying long distances. The higher resolution is possible on the 3dfx card because it supports 8 bit imagemaps. Matrox cards are not supported on this version. They do not support all the features required and so Rowan is doing more research.

My test system is a PPro 180 32 MB with Orchid Righteous 3d hardware running under Direct3d in WIN95. Thats right, you won't have to boot out to DOS any longer to get into Flying Corps. The patch is about 3 meg zipped at this date and install went smoothly. However, you will have to access the graphics settings menu within the sim in order to select the 3d hardware. You will also want to adjust the gamma settings on your 3dfx board under the Display Properties tab in WIN95. Mine are about right at 1.6x.

Once in the sim you can access the joystick menu to select the FORCE FX. Having done this you will calibrate the stick then go back to the main menu. From thea new preferences menu (the one that shows the cake with the CHERRY on top...!) you may choose to ENABLE or DISABLE stick stiffness. With Force FX support enabled, stall and buffet effects will be transferred back to your stick. The stick will also reflect dynamic pressure and control surface deflection changes.In the beta I have machine gun recoil is also present, but not engine vibration. Perhaps this may yet show up.

In my original FC review I noted along with others that there were a couple of AI tweaks needed. Rowan has gone ahead with these changes in the patch, and AI aircraft no longer spin as readily, nor do they plow into the ground so often when descending in a turning fight. These changes may seem subtle, but they will put the fight on a new footing for many pilots who had learned to take advantage of these weaknesses when pressed.

As mentioned, another screen of configuration options has been added:

Okay, so what is the new sim like? With these numerous tweaks both feel and execution have changed significantly, in theory.

You will find that the reality has also changed. First, terrain detail is photorealistic. It is a bit easier to spot aircraft at a distance as a result, and if you are flying high above the ground looking down for those sneaky scouts they are also easier to spot. Second, the feel and execution of flight is quite different. You may go streaking past an aircraft where before it would have passed you by more slowly. You'll find that dogfights feel quite different.

Smoke and fog effects are very nice. Clouds and haze look great and you will definitely feel like you are there when you up high. It really is quite beautiful.

I'm not certain about this next one, but it seems to me that red out and black out are now more noticeable also. I used to get away with some serious gs without much effect, but I can no longer do this. If you pull heavy gs you are NOT going to be able to see what you are doing. Course, do this too much in these airframes and you will shed your wings anyway....!

In addition, jitter on landing and jitter in the flak fields has been added. Nice effect and definitely adds to the realism. Add to this some FORCE FX output and this really is pretty close to sim heaven. I no longer feel the pain of waiting for RB II!

Note that screen shots have moved from the printscreen key to CTL P. This generates a TGA file which outputs to the STILLS directory. Here are some shots from my recent forays into WWI flight....: 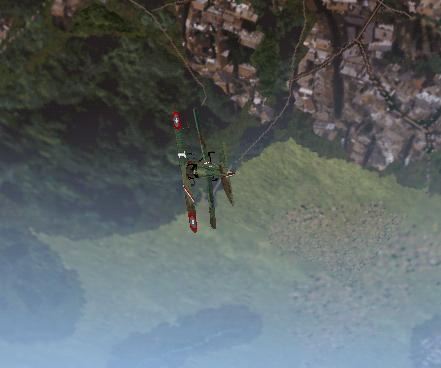 The Thrustmaster files supplied are weak... here are mine. These files are designed for use with the F22 Pro and the TQS, but can be easily modified for FLCS.