Feb. 19th 2001: BASE BUCHEN, GERMANYThere was a deep roar over the night skies of Pyongang when our combined forces fell in. Pilots from four squadrons joined a last major strike on the DPRK capital. It was on day twenty-eight of the official campaign of the 1st G.U.N.S. "Richthofen" squadron in the theatre. The war of this world famous campaign was at its final stage! And those pilots who flew it knew one thing: Kick ´em out or be kicked!


BackgroundThe situation had developed well for us in the recent weeks. After a number of successful strikes in the area of Hamhung, our Falcons could reduce the air capabilites of the Reds for this move. This campaign (Rolling Fire) was running for twenty-eight days now, and engaged our squadron for more than nine monthes, starting under the Realism Patch2.0 once in May 2000. We had been flying hundreds of sorties in this period and faced many threats in our never-ending war against the DPRK, the PRC and the Russians. Over the months, many squadrons gave us talented pilots and material to help us in our desperate fight. The historical LAN session in Stockton with the 209th Deltahawks was part of this adventure (see our COMBATSIM.COM article Operation Tigerspirit or go to our site for the report here.) Yet this mission now was still a very risky adventure, so the CAG (Command Air Group) decided to fly this strike under the cover of deep night.


Situation in the Capital Ground FightsWhen the CAG ordered our Mech Battalion with twenty-nine Abrams to move Southwest, further steps had to be taken to enable this attack as safe as possible for our battled ground forcess. Within the center of Pyongyang our tanks still faced continous attacks by frogfoots and small ground forces. The situation can be seen best in this tactical picture, taken in the early evening of the flight a few hours before liftoff. 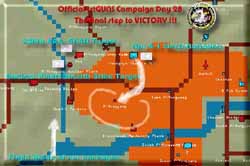 The Final Step to Victory. Click for larger image.


Additionally our tactical analysis made it clear that we would need a SEAD strike against the 246th AAA battalion which was still firing like hell at all coalition planes. To give the regime the final kick, the CAG had decided to concentrate the raid on the big nuclear plant west of the capital which was still 100% operational. By instantly knocking out the lights we would have the surprise on our side.


Forming the Gorilla...To pull-off this masterpiece, we had selected the most skilled pilots from other coalition squadrons for a variety of specialized tasks. The planning of this operation lasted for a whole day! In a nutshell: First, while a package of SEAD pilots from the 1st G.U.N.S. was knocking out the AAA, a four-ship stealth mission with F-117s would move in and knock-out the nuclear plant. We were extremely lucky to have two highly talented F-117 pilots from the 23rd HAWKS squadron with us. Two further F-16 packages would give escort to the whole flight. Here we were able to put our best "A2A cover pilots" together (including our ace Nesko "Snake" Ivkovic) in an unique cooperation with the most talented and unique South Korean pilots (like You Dong Hyun "Iceman"). Additionally, four Hornets worked as a powerful additional escort reserve, for we faced veteran Mig-29s over the target area en masse.

So all in all we had fourteen human pilots from seven nations to coordinate as this:

The flight settings were most realistic as you can see:Connection settings:Everyone of you who flies the falcon online would say now "Nej, that would NEVER work on the internet" 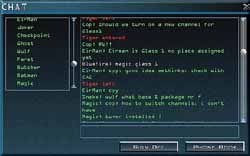 
The Outcome
The launch times varied from 21.39 until 21.54 demanding much discipline from all pilots. I could well imagine the sweaty hands around the globe as we launched the mission. Ireland, Germany, USA, Great Britan, Austria and South Korea together at one time on the server, this was absolutely thrilling. Well, two of the four Hornets had some trouble to launch at the first run but THE REST RAN STABLE FOR THE WHOLE MISSION !!!! The F-117 strike was absolutely successful against the plant (the WL got damaged but made it with the rest of his flight safe back to the homplate). The SEAD and ESCORT packages were engaged in heavy dogfighting over the city skyline and we lost several planes, but all fought like hell killing more than two dozen bandits in the target area and damaging another in a hard fought knife fight east of the capital.


We Made It!Incredible, while doing the AWACS stuff I could feel how everyone gave his very best to finish this strike. Sometimes the conversation grew hectic for while we called-out vectors to the next bandits, but it worked. (The longer I think about this the more unbelievable it seems...) If only MicroProse (Editor's Note: Falcon 4.0 is now owned by Inforgrames) would have heard and seen what I saw this evening. The plant went down to 30%, the sirens wailed over Pyongyang and the air vibrated (including my ears . . . LOL). This mission lasted 65 minutes.

When the last plane landed at the homeplate the Mech Battalion had finised its move and THE VICTORY VIDEO CAME !!!!

I thought I was dreaming, but here is the proof: 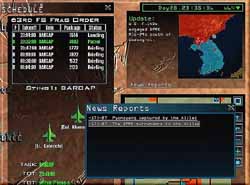 
At this stage we recognised a small bug: The medal for this Campaign were only transferred to the server and not to the clients! (So I sent the mission file via email and anyone who opened it got his medal this way)

Later I called my American friend Rhino (C/O of the famous 209th Deltahawks) and he assured me that never in the history of Falcon 4.0 online flight a similar event had taken place. For myself I hope that many other like this may follow worldwide..

Who wants to be a part of this unifying experience ???

Join the 1st G.U.N.S. now and enroll in a modern international Falcon squadron! We fly for nearly 4 years online now and have become true friends. Want to become part of this unique group? Click here, to see the requirements and get more information. We would like to have you among us!!!

Do you have a similar virtual battlefield experience to tell? Send us an email for details on how you can submit your debrief.