Can you imagine what will happen if a true Falcon Internet squadron meets with with one of the world's most famous LAN squadrons? Being stuck together in a "war-room-like bunker" for some three days and try cooperative campaignflight when you have never seen before or even flown together? Two Falcon squadrons which couldn´t be more different, dared the impossible. Actually we had NO idea if this would work, but we thought it was worth a try.

And so some pilots of our squadron from Germany flew to the US West Coast to find out. And people ... it was terrific! 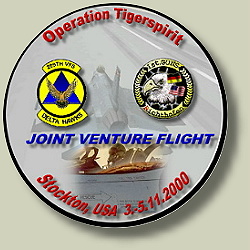 This article now details our experience of the following well prepared and executed Joint Venture Flight. It took place from Nov. 3-5th 2000 in Stockton, CA. Involved where the pilots of the internationally operating 1st German-US Netfighter Squadron "Richthofen" and the 209th "Deltahawks". The flight exercise took place under very clear conditions (e.g. using the standard NATO brevities codes, 95% reality) und with a beta version of the RP 4, delivered by the C/O of the Deltahawks, Jeff "Rhino" Babineau. 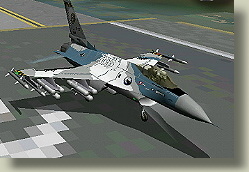 
History of the 1st G.U.N.S.The roots of our squadron last back until April 1997 when our C/O Arnt "vOid" Stoeber and Bluefire decided to fly Janes Fighter Anthology with 14.4 modems over the Internet. When a few Americans joined our frustrating attempts, the idea of an intercontinental virtual squadron was born: The 1st German-Us Netfighter Squadron. Later, we agreed to set up this squadron as the 1st G.U.N.S. "Richthofen". This is a dedication to the WWI most famous squad of fighter aces, the "Jagdgeschwader 71" which was under the command of Freiherr Manfred von Richthofen, better known as the "Red Baron". Although 80 years have passed by, we think that the spirit of this famous squad is still alive and can find a virtual resurrection in a non-militant way on the Internet...That was our original intention, and we kept it up until today!

We decided to keep our home base in Aachen, Germany with further plateaus in other German and European cities. Within the next few months more and more flightsim enthusiasts streamed into the our new squadron and brought their ideas in. We then followed up the classical path of an Internet flightsim squadron: ATF, Longbow 2, IAF, and then in November 1998 the most thrilling thing entered our life: Falcon 4.0! Going through all patchwork by the months our squadron changed completely and only a few fanatic pilots went through all obstacles. But we made it! Those pilots who stood with us became highly experienced virtual F-16 pilots.

So times have changed: Our new rookies meanwhile undergo a very strict trainee program before they pass their final test and will be allowed to fly with us in the campaign flight. The whole stuff is presented by a group of trainers under the command of Tom "Tiger" Moelter in Alamogoro USA. Nearly 4 years of active online flying have made us become real friends who also help each other if necessary. Wherever we fly in the world: The Falcon brought us together! Meanwhile we even have Chinese and Taiwanese Rookies who run under our training program. We will see what the future of the falconword will bring...

Our CampaignSince the very beginning of Falcon, we started online campaign flights. These days we are flying our 6th campaign (Rolling Fire) which was developed up to day 18 when we came to the Deltahawks. We had been flying this campaign for more than 5 months (!) with very strict rules and only fully approved pilots. Until November, Alliances were only flown with some hand-selected pilots of our neighbour squadron, the Austrian based 440th VFS"Angeldust". Our complete Campaign (we call it our beloved "baby") can be downloaded right here.