Wind Corrected Munitions Dispenser is a smart-cluster-bomb, and it enables you to drop them accurately from high altitude, just like a JDAM. The F-22, B-1B and B-2 will carry this weapon, in order to safely attack armor and targets of opportunity. Instead of bomblets, it may eventually carry smart sub-munitions such as SKEET. The USAF has been experimenting with the use of clouds of carbon fiber strands that would short out radars, and electrical grids, and may include this in the dispenser. The use of carbon fibers from Tomahawks put down a po.

This is an updated GBU-15 bomb, using a 2000lb as the core, adding a rocket motor for standoff and low-alt. Launch. It has an imaging IR seeker and a data modem that sends its view to the WSO. GPS\INS then gets it close to the target, and then the WSO searches for a target point via IR\data link, while the F-15E is flying home, and steers manually to the target, or put on automatic. If a mistake were made or civilians suddenly appeared, the WSO could prevent catastrophe even at the last second, because of the data-link. This is a feature that I believe will become very common in future weapons, as standoff distances increase, tolerance of collateral damage will shrink, and Bosnia style wars become more commonplace. The cylinder you see underneath the bomb casing is in fact the rocket motor, giving it a range of 15 to 40 mile, from the F-15E, F-111 and F-4, at night or in bad weather. It can be launched from as low as 200ft, avoiding air defenses. This weapon is in production and was deployed to service in 94, and 600 are expected to be boughtg/wep_7.jpg" alt="AGM 130">

The JSOWs computer uses two Intel 486 33mhz chips, to pilot the weapon along several waypoints , unless you get bounced and the weapon is released too early, in which case the cpu decides to override the waypoints and make a beeline for the impact point. The coordinates can be entered in flight , particularly useful for doing CAS missions at night\bad weather whiants to use it for. All versions use GPS\INS, but the C model adds a data-link and he AGM-130. 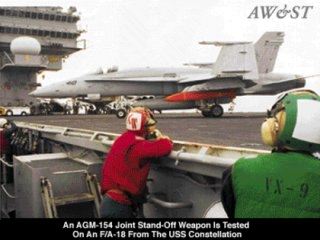 One area of major concern to the users of weapons using GPS based guidance is its potential vulnerability to jamming. Why buy a weapon for $400,000 if it cannot hit the targets? On that note, they have tested such systems thoroughly and woulndence on GPS if it were effective to jam it. Understand that milspec GPS are much more resistant to outside $200 special you bought to go hiking. 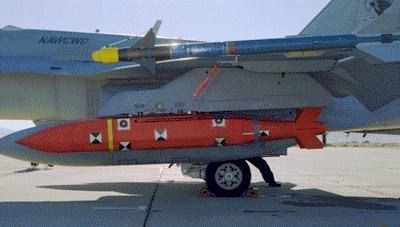 As far as survivability is concerned, radar directed AAA will eventually be able to intercept such PGMs (check out the CWIS on navy ships), but by the time this is common, the terminal speed of the PGMs in use will be drastically increased. Recent research sugsing an advanced rocket or scramjet to achieve speeds of over Mach 6 could enable the weapon to destroy deeply buried targets as well reaction time. 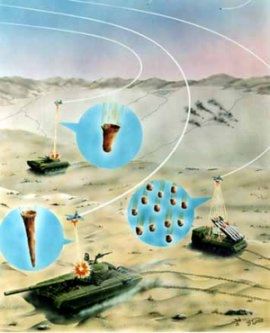 So far we have only dealt with weapons intended for structures and bunkers, but modern war often involves mechanized battalions. Unfortunately, in the past, destroying tanks and convoys had a positive effect overall, but was very dangerous for the pilot, as well as to friendly troops in close proximity. Modern SAMs an from getting close enough to visually ID the target, and therefore launch Mavericks at unfortunate friendly troops. Having been a ground pounder myself, this isught. One way of separating the friendlys was pioneered in DS was to add IR lamps on top of our vehicles, without being detected by enemy ground units.

Still, this method of ID still has limitations: even from a standoff, Mavericks are still within SAM range, you can only carry a few on yre very expensive if all you want to destroy is a bunch of trucks! ( as much as $270,000 for the IR version) In DS, 5000 Mavericks were fired, at a cost of $537,000,000+! All the LGBs c, by comparison, for twice as many bombs dropped. The USAF started an ambitious program to develop a low cost and higher performance anti-armor weapon which has seen little press.

The Low Cost Anti Armor Munition uses a Ladar (laser) seeker, target recognition, and top-attack to engage the enemy. It is very small: 50lb, 20 in., glider (10 to 40 miles) and powered (30 min. or 100 miles) versions will be made, and inexpensively at $23,000 to $30,000. The weapon is given the area, target type priority list, and type library before takeoff, however, simpler programming options in flight by the pilot allow for targets of opportunity and fluid battle situations thassion. The weapon searches the designated area for vehicles, compares the signatures against its library, and selects the highest priority target to go for. It will discriminate between SAM, SCUD, types of MBTs,cks, and then detonate in the most advantageous way directly on top: long rod KE for MBTs, slug for IFVs and frag-slugs for soft targets. 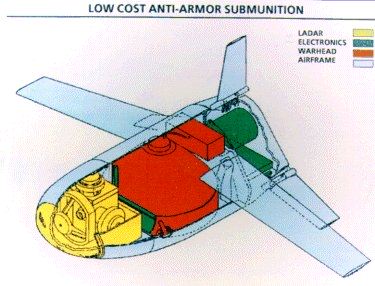 One indicats weapon is to the USAF is found in an early report to congress which proposes that the B-2 carry 192 of these to destroy entire formations in one pass, along with the F-22 carrying 24 LOCAAS internally with 2 AMRAAMs. The deployment of ann the US best, most expensive and stealthy platforms is in stark contrast to the Maverick on USAF F-16A and A-10s, especially since the "Hog" seems to be the least respected plane in the service by all but the pilots who fly them.

It is expected that the powered version will be used to destroy SAM sites and loiter above them during ely reducing the dependency on many designated Weasel \HARM to cover the incoming bombers. This version may add components from the HARM itself, enabling it to detect the radar emissions, and switch to Ladar once the target turns off the radar and drive down the roARM, it costs $260,000 and 500 million worth (2000 missiles) were used in DS as well, which means further savings with Locaas for the USAF\ taxpayer. One wonders if future versions could detect man-portable SAM launchers (ie., strela\grail) and destroy them.

Having the LOCAAS run as a lethal decoy would be a cost effective stratagem, and individual powered units could be fitted with detection equipment relaying the frequencies of radio\SAM\radar sites to jamming support A\C (like the Raven and Prowler) just prior to a strike. Another potential use of the airframe would be as an observer for BDA assessment of a critical strike, relaying video back by data link of the whole strike and the after effects 20minutes later. Although UAVs could do this, they may not always be practical because they would be already tasked to do new target searches, may not have the range required, be more expensive\less expendable for high threat areas, and require even more coordination during an already complex strike mission.