The RAF has recently chosen this missile for its anti-armor weapon for CAS missions, and the airframe is the same as the Hellfire used on US ARMY Apaches. 18 of these can be carried on a Harrier GR7 (AV-8b), three to a pylon. It uses a millimeter wave seeker, inertial autopilot and target library to enable it to be launched indirectly, off-boresight, as well as direct fire. It is simply fed the coordinates and flies there on the deck, where it then searches for a tank.

This is a fire and forget weapon, unlike the RF Hellfire to be carried on the Longbow. Existing Hellfire upgrades to Brimstone capability will be offered, and this could significantly increase the survivability of anti-tank helis, like the WAH-64 bought by the British Army. Transport helicopters like the UH-60L could become CAS support, carrying and launching Brimstones from 16km away without exposing themselves from cover, while Apaches, UAVs and jets give direct coordinates.

The Stormshadow could possibly be the first true stealth air weapon in service outside the US. It is a stealthy cruise missile developed for the UK , France and Germany. Three versions will be made, the first being a point target weapon for hard targets, using a kinetic energy warhead. This version will fly more than 220 km from the release point, update its GPS\INS using a TERCOM system similar to that of the ALCM, and use an imaging IR seeker in the terminal phase. Its unclear to me whether this means a data-link will be included. 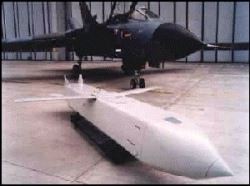 Apache is a runway\airfield attack weapon. The significance of these weapons is more one of similar copies being used by unfriendly countries, and trying to defend against a strike involving 12 or more such missiles, while long range AAMs are launched against us. Systems such as this one are expensive compared to most of the other weapons here, but this appears to be just a stop-gap for the UK to get some stealth strike capability.

Tracor is not actually a weapon, but a company that converts aircraft into sophisticated drones. The UCAV is the Uninhabited Combat Air Vehicle, an advanced strike weapon which will fly to the target, destroy it and go home without any human control required (of course, humans will oversee the critical strike unfold and change tactics accordingly, from command posts which may be on a different continent entirely. UCAVs present all sorts of challenges for the engineers, and I will discuss this further some other time.

Tracor converts F-4G\E\C to QF-4, which is a full scale aerial target. Two types are made: Limited- these are targets that would be used for testing advanced air weapons in the evaluation phase, where targets must be destroyed. During the test phase, missiles would not have warheads, and be programmed to "near-miss" the target, with onboard detecting the hit. The Unlimited types have full EW weapons (such as radar emitters that fool a radar into thinking the target is at a different location) and new defensive systems so sensitive that the USAF installs this themselves.

Defensive systems that make it on the F-22 would probably be tested in such a way against our own AMRAAM, RBS-70 (laser guided SAM) and Archers(IR, CIS), to view weaknesses in the systems. Tracor feels they will have the upper hand in winning the first UCAV contract (due to extensive past experience) which will likely involve converting the F-16A into "drone combat vehicles". The RAF is very interested in UCAVs for replacing Tornado strike planes.

This article is by no means all inclusive, and is meant only to introduce you to the new weapons under development or that have not been publicized much. As you can gather, these weapons will change how airwars will be conducted, and as a result sims which represent current and future timelines must include some of these. Unfortunately, this has the potential of making some sims a push button affair, totally lopsided domination, with no skill or action (like furballs). This effect has already been seen in a few current sims from the representations of AMRAAMs being VERY effective (and F-22 vs Mig21\ M1A2 vs BMP1) and no serious challenge presents itself.

I see two ways of correcting the situation: allow varying levels of capability to the weapons (like EF2000 and Hornet 3), giving the enemy better weapons than they likely can afford to buy, penalize high cost weapons for low cost targets, and finally finite number of advanced weapons (which is a very "real-world" reality). The other thing we can do is simulate more historical situations, like F-4s in Vietnam or CF-104s in central Europe (cold war heats up).

Any mistakes in the articles are entirely mine, except in the case of systems which do not have final configurations yet. Anyone wishing to contact me: Rick, Rick Kent