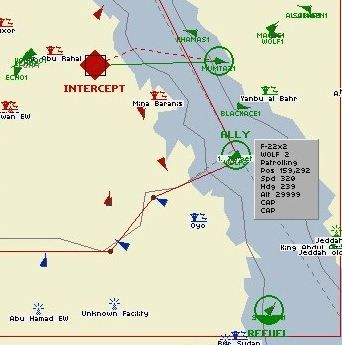 Csim:ADF expanded greatly on our ability to communicate with other assets and with our wingmen. Will TAW expand these abilities further? In what ways?

SPK: "F-22 Total Air War completes our original vision for the F-22 simulation; It is a Total product in that it opens up an unrivalled panorama of exciting new possibilities for the participant. Communications, with all its possibilities, has to come second to the overall game-play.

DID has learned a huge amount in the time that we have been developing F-22. There are so many things that we can do that we can not possibly cram them all into the current product! Its like a pop singer  every song is different and draws upon different singing skills - so, some ideas appear now, and others will become part of future products.

One of the great strengths of DID is our ability to keep learning so you can certainly expect F-22 Total Air War to significantly expand communications across the total system that I have described above.

Csim:What other new environmental features will we see in TAW? Will we see a wind or turbulence model or weather?

SPK: "DID has a vision of what a really great military flight sim needs as part of one cohesive product. For sure as a Producer I would like to see weather in all its manifestations to be simulated because in the real world weather is one of the factors that has a major influence on what military hardware is used, and how.

The weather within F-22 Total Air War will be what we can currently make the code base do, in the time we have available. I do not expect that there will be a significant difference to the previous product, but then that is not the main focus of TAW. Nevertheless, we are DID, and when we get an opportunity, we tend to sprinkle a little magic on our products!"

Csim:ADF gave us some new enemy fighters and brought the enemies under the same constraints as the virtual pilot. Will TAW bring us any new platforms like the Su-32N or new weapon systems like the JSOW or LOCAAS? Or will the enemy have new weapons like R-37 anti AWACS missile?

SPK: "When any developer starts a new product, there is a list longer than you have ever seen, of things we would like to include Over the course of the project we have to compromise on some of these things in order to get a product out there for you to buy.

I certainly have a list of new aircraft and weapons that I would like to get into a flight sim. As in the previous answer, if we get the opportunity to include extras in the cast, then we will try to do it."

Csim:Everyone who follows DID knows that WARGEN was the heart of EF2000. Can you give us an overview of the WarGen II system? What are its essential components and what is it designed to do?

SPK: "I am sure that all the developers who are really seeking the Holy Grail of a Dynamic Interactive Campaign have sweated blood to produce campaign code that deals with the desirable issues. At DID, WARGEN has been continually developed in pursuit of the ideal solution.

What we have learned along the way is that there are several possible compromises that will address the same problem. WARGEN 2 is not one, but several systems; built from modular code. Some of these elements will appear in this product, and some will appear in other products.

WARGEN 2s essential components are that it builds a real time campaign based on a real world balance of power, within a simulated real world environment. The player will be able to interact with this world, and all actions (both the players, and AI controlled elements), will have an effect on that world."

Csim:How do these components compare to the first WarGen system? What is unique about WarGen II?

SPK: "The player is part of a war fighting system just as surely as he would be if enrolled within the US airforce. WARGEN 2 immerses the player more deeply than we accomplished with EF2000. Both versions of WARGEN are unique; you must remember that WARGEN 2 is geared to a different type of conflict.

EF2000s campaign was based around the Cold War, NATOs fight against the Soviet block in Europe. Whereas WARGEN 2 within F-22 Total Air War is geared to the changed world in which the USAF may find itself fighting many diverse opponents with different abilities and power, in a number of scenarios that are possible in the same area of the world.

WARGEN 2 will definitely handle things differently within a campaign, exactly how will remain our secret, but essentially it does a different job."

Csim:I understand that WARGEN II owed its direction in part to the theories of John Warden. According to Warden destruction of the enemy is NOT the essence of war. This grows naturally out of his perspective on the interdependence of systemic elements such as leadership and infrastructure. How does this aspect of theory impact the TAW campaign?

SPK: "Yes, definitely. John Warden has commented favorably on our efforts. His ideas reflecting the changing role of the USAF today has been taken on-board at DID.

The WARGEN 2 campaign does take account of the theory that you can render a country unable to wage war in several ways. For example, you might attack your opponents air bases, or you may attack his command centers. Remember earlier, I talked about the F-22 as part of a greater system? This stealthy but expensive platform has abilities that are suited to waging air war TOTALLY, and that includes the different policies the president can choose from in order to wage a war." 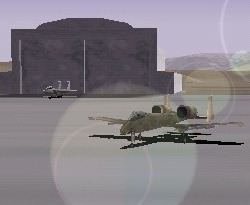 Csim:Warden writes that, "[when we think about winning wars we must take a strategic and operational-or top-down- approach if we are to succeed." Why is the top-down approach so revolutionary, and does it impact the campaign in TAW?

SPK: "Just as I earlier outlined why you should consider the F-22 as part of a military system of which the aircraft is just the sharp end, you must consider that no one (in the real world) goes to war because they enjoy waging war for its own sake.

Political Influence and waging any kind of war are two sides of the same coin. As Clausewitz said: "War is the extension of politics by other means" The war is just the sharp end of a total system designed to influence events to each countries own agenda.

Traditionally when a country wages a war it has focused on the war itself; how to cause so much damage that the enemy can not continue the war. In the modern world you are going to meet enemies who have a very different interpretation on what defines a win, and how much pain they can take.

Look at the Gulf War. Both Saddam Hussein, and the UN appear to think they won at the time because they have very different philosophies. Johns top down approach is revolutionary because he says we should look at who is fighting, what motivates them, as much as where are the enemys military forces, and his industrial muscle. 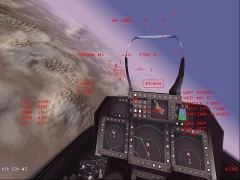 An enemy is more than military vehicles and facilities; more than static targets. Within F-22 Total Air war we have considered that you might short cut the process of destroying your enemies ability to wage war by creating command confusion. You might render an air base useless by lack of fuel, weapons, and power at a lower cost to your forces and in shorter time than by just shooting the hell out of the sharp end.

I would like to add that most people see straight away that a countries own agenda might be greed. An agenda may also include securing a wider peace so that a countries industries might benefit... These are the reasons why a country needs to have total control of the air."

Csim:Can you sketch for us what an average "game" is going to look like in the new campaign at the command level. What am I going to have to take into account in order to win?

You will be following a war policy, but within that, you will be trying to use your points of presence to leverage a result in which you win. You will have to see as much as there is to see, work out what the enemy is doing, and deal with it at any, or all of the points of presence, that you have at your disposal. Working out exactly what all this means is going to be the fun in F-22 Total Air War Campaign. I do not think that there is going to be such a thing as an average campaign."

Csim:How will "politics" manifest itself in the campaign?

SPK: "If you get the enemy leader in your sights, and you have a go-ahead from higher command, then shoot him, or her! Whatever you do, you must remain alive, and so must a significant number of your allied forces."

Csim:In early design information we were thrilled at the inclusion of the AWACS perspective, but I don't think many understood what this meant for the strategic level of the sim. Tell us about strategic use of the AWACS in terms of air doctrine in TAW.

SPK: "The AWACS was always considered as part of the Campaign, but included within F-22 Air Dominance fighter as a sim-expanding feature, and to give the serious pilots a chance to train.

You have not fully used the AWACS until you have used it in Campaign!

As in the real world the AWACS is the essential tool to understand what is happening in a 3D space that you wish to control. Only with control over this 3D space can you effectively, and with minimum losses, be able to follow any other kind of activity, strike, sea ops, ground war etc. The AWACS is part of the big system. Lose the AWACS, and all your assets are on their own!.

This is part of the reason why the F-22 is designed to additionally datalink with its own kind, each F-22 is capable of becoming a mini AWACS."