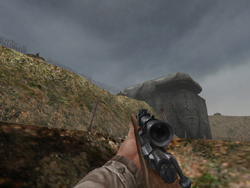 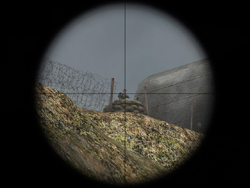 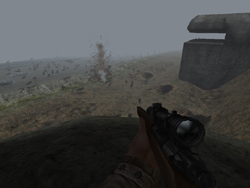 In the game, players will assume the role of an Allied soldier, and they will take on a number of difficult assignments behind enemy lines in a variety of locations, including France, North Africa, and Norway. The first-person shooter is powered by the Quake III engine, and it will feature a complete single-player campaign along with deathmatch and capture-the-flag multiplayer modes.

MechCommander 2 Goes Gold
Microsoft today announced that MechCommander 2 has gone gold and will be in stores on July 19. In the game, players guide roving squads of enormous BattleMechs in real-time combat. MechCommander 2 features full 3D terrain that provides tactical advantages for sensors, probes, and scouts. Also available will be camera controls that can view the action from high above or up-close and personal. People will even be able to create their own missions using the same tools as the MechCommander 2 level designers.

Developed by Taldren, Starfleet Command - Orion Pirates centers on the deadly Orion Pirates, a popular, long-standing element of the Star Trek universe. A brutal force of privateers and criminals controlling territories of Federation space, the Orion Pirates consist of eight cartels, each with unique histories, user interfaces, crew voices and identifying logos. The game features a 12-mission campaign plus 26 skirmish missions and three bonus missions based on the classic TV episode "A Piece of the Action."

In these bonus missions, players must return to the Planet Iotia to execute a deal negotiated by the Starship Enterprise, collecting dues from 1920's style gangsters. Instead, they find that the Orions have been hard at work muscling in on the Iotians, carving up that part of the galaxy. This latest installment of the Starfleet Command series features new phaser types, including shield piercing, along with other new weapons such as heavy photons.

General Dynamics Awarded MK19 Gun Contract
General Dynamics Armament Systems, a business unit of General Dynamics (NYSE: GD), has been awarded a $12.5 million, firm-fixed price contract by the U.S. Army, Tank-Automotive Command in Rock Island, Ill., for production of 832 MK19 40mm grenade machine guns. The three-year contract includes options for an additional 2,496 guns with a maximum order value of $49 million. The MK19s will be produced at the General Dynamics facility in Saco, Maine. 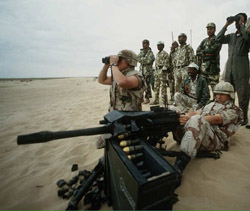 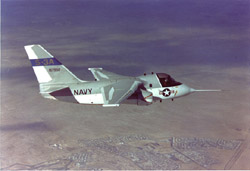 The S-3 is currently certified for a structural life of 13,000 hours, which the Viking fleet is rapidly approaching. The S-3 FSFT program will determine how much longer the Navy could keep their Vikings flying.

"The U.S. Navy and the Defense Department have chosen to extend the operational service of this much honored aircraft, and it is up to the Lockheed Martin/Navy Integrated Product Team to determine by how much that service can be extended," Jarvis said. "Their decision to continue operational use of the S-3 Viking will provide the Navy with extended and unmatched ASW capability for years to come."

The U.S. Government, with data provided by LM Aeronautics' FSFT program, hopes to certify the S-3's operational life through 17,750 flight hours through these fatigue tests. Lockheed Martin has been prepping an S-3 fatigue test article since winning the Navy's $40 million contract for this work in 1998. The fatigue testing -- which encompasses "bending and flexing" the aircraft to determine the physical limitations of the components and materials from which it is made -- should conclude in late 2002.

Metal Storm Gun for UCAVs and Robotic Vehicles
Metal Storm Limited has completed a US government-funded study into potential defence applications of its 100% electronic ballistics technology. The feasibility study examined the use of the technology in electronically operated gun pods for Tactical Mobile Robotic Vehicles (TMRVs) and Unmanned Combat Aerial Vehicles (UCAVs).

The completed study is one of a number currently underway as an extension of the A$17 million Defense Advanced Research Projects Agency (DARPA) programme awarded to Metal Storm in March 2000 to develop a prototype Advanced Sniper Rifle for US defence forces.

The report from the A$660,000 study has now been submitted to DARPA, the managing agency for the Advanced Sniper Rifle project.

Metal Storm's Managing Director, Mike O'Dwyer, said that one of the scenarios explored in the study was a situation where an Unmanned Combat Aerial Vehicle (UCAV) armed with a Metal Storm gun pod could provide active protection for surveillance aircraft, such as the Joint Surveillance Target Attack Radar System (JSTARS) or other high-value aerial assets. JSTARS systems are carried aboard long-range surveillance aircraft, designed to locate, classify and track ground targets in all weather conditions, day or night. JSTARS gives allied commanders the information necessary to make effective decisions by providing real-time situational awareness.

Mike O'Dwyer said the study also examined the potential to incorporate Metal Storm technology on ground-based robotic vehicles. In one scenario a robotic vehicle equipped with a Metal Storm system, fires a dense array of kinetic projectiles or explosive shells in a pattern, which opens an entry through a block or concrete wall. The advantage of robotic vehicles is that they can be sent in ahead of troops to force an entry. Operating the robotic system achieves the objective remotely, while minimising danger to troops.

Mr. O'Dwyer said the company is hopeful that during the coming months the study will lead to additional US Government research funding to develop these additional applications of the revolutionary Metal Storm technology to fully operational prototypes.

US DoD Amended Budget For FY 2002
Secretary of Defense Donald Rumsfeld has released details of President Bush's Fiscal Year (FY) 2002 amended defence budget. The amended budget adds funding and programme details to the broad defence vision the President outlined in February in his budget submission to Congress, 'A Blueprint for New Beginnings'.

Secretary Rumsfeld said the new budget begins an increased focus on future threats. "If we are to extend this period of peace and prosperity, we need to prepare now for the new and different threats we will face in the decades ahead and not wait until they fully emerge." He said the new budget balances preparation for the future with current needs -- through robust funding to improve morale, boost readiness, transform defence capabilities, and upgrade ageing facilities.

The amended budget requests $328.9 billion in discretionary budget authority for the Department of Defense (DoD). The proposed new topline is $18.4 billion more than Blueprint DoD total of $310.5 billion. It is $32.6 billion higher than the $296.3 billion enacted by Congress for FY 2001 - an inflation-adjusted increase of 7 percent. The $32.6 billion topline increase in FY 2002 is in addition to the President's $6 billion FY 2001 supplemental appropriations request, nearly all of which is for defence activities related to military quality of life and readiness.

The FY 2002 amended budget will boost readiness, which has been strained by a high tempo of operations and escalating maintenance costs for ageing equipment. Readiness is funded primarily in Operation and Maintenance (O&M) accounts, funding for which will climb from $108 billion in FY 2001 to $126 billion in FY 2002.

The budget includes $61.6 billion for Procurement. It aligns programmes and funding to provide balanced and strong support for both the US military's short-term requirements and for its long-term transformation.

The budget aligns Research, Development, Test, and Evaluation (RDT&E) funding and programmes to target technologies with the greatest promise for transforming the US defence posture. Within RDT&E, the budget includes $8.8 billion for Science and Technology (S&T), which funds basic and applied research and development of technologies and prototype subsystems - all of which are key to preserving America's superiority in military capabilities.

The budget includes a total of $7.0 billion for Ballistic Missile Defence Organisation (BMDO) programmes and $1.3 billion for lower tier systems that will be devolved to the Services. It emphasises a new approach focused on an expanded, robust RDT&E programme with flexibility to pursue most promising developments. The Airborne Laser, Space-Based Laser, and Space-Based InfraRed System (SBIRS) Low programmes are to be merged into the BMDO program.