Finnish Virtual Pilots Convention
Finnish virtual pilots will gather next weekend for their largest annual gathering, Mosquito Meeting 2001, Räyskälä, Finland 28th June - 1st July 2001. Mosquito Meetings are made special by the fact, that while they are somehow considered as something called a "LAN party" these days, the meetings are purely for aviation enthusiasts. Pilots flying combat simulators, primarily from Aces High and WarBirds communities, will gather to the 7th convention. The convention takes place in south west Finland and is a four day long session of flying in the virtual skies of World War II and meeting aviation fans.

The origins of the convention go back seven years, when people flying Air Warrior gathered into small island in the west coast of Oulu. The island had no electricity and no telephone lines - electricity was made with a generator and the Finnish mobile company Telecom Finland sponsored wireless Internet connections. After that the convention has been arranged twice with the help of Finnish Air Force, using FAF Training Academy's summer camp -with visits of course to the Academy, their simulators and shooting ranges. After that the online pilots travelled across the whole country withing spitting distance of the Russian Federation's border and major battlefields of 1939-1940 Winter War. Click here for more on Mosquito 2001.

CRN, a leading trade newsweekly of computer industry news and analysis for solution providers, integrators and e-businesses, constructs the Ultimate PC every year at PC EXPO and Comdex, two of the computer industry's largest trade shows. CRN Test Center engineers build the Ultimate PC every day before a live audience at the Crystal Pavilion entrance of the Jacob Javits Convention Center at PC EXPO.

"Through rigorous testing, we found that the 1.4GHz AMD Athlon processor combined with DDR memory is an excellent performer," said CRN Test Center Director John Yacono. "In many test applications it outperformed competing processors with higher clock speeds, which indicates the AMD Athlon processor's architecture gets the most out of each tick of the clock, making it the natural choice for the Ultimate PC." 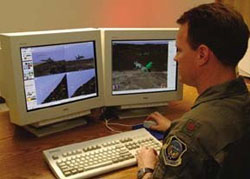 "ICADS is by far the most advanced, cost-effective air combat display system on the market today," said Rick Dickson, CDS director of Air Combat Training Systems. "It is an ideal solution for rangeless/autonomous ACMI systems because it can be easily packed and loaded for shipment to any site - allowing pilots to train and debrief anywhere they can fly."

ICADS supports up to 100 high-activity aircraft, and is interoperable with all existing fixed and autonomous ACMI systems and various pods. It is available in several configurations, including stand-alone software to be self-installed on a customer's PC system; as a stand-alone display and debrief station; or as part of a full air combat training system.

ICADS is quickly gaining popularity among air combat crews because of its flexibility and user-friendly graphical interface, noted Steve Queen, CDS programme manager. "With ICADS, aircrews no longer need high-tech skills to conduct and review critical training missions," he said. "Anyone who can operate a standard PC within the Microsoft Windows Operating System environment can easily use and install ICADS."

The system provides all standard air combat display and debriefs - including flight dynamics, weapon events and the outcomes of each engagement - as well as 2-D, 3-D and alphanumeric displays. It also includes many new and significant features for debriefing aircrews, such as altitude view, quad view and missile chase view. All events can be frozen, reversed or fast-forwarded during the replay.

ICADS runs on a single or dual monitor. It can also be used to drive large screens for mass debriefing.

In addition to the RAIDS program, ICADS will be integrated into the Royal Netherlands Air Forces' new Autonomous Air Combat Manoeuvring Instrumentation (AACMI) system, and in Cubic's Alaskan ACMI systems at Eielson and Elmendorf. The US Navy is currently evaluating the system at the Beaufort TACTS, South Carolina; Langley/Oceana ACMI, Virginia; and MCAS Cherry Point TACTS, North Carolina.

Sikorsky Aircraft On A Growth Path
Sikorsky Aircraft is on a growth path to become a substantially larger business in the years ahead, company president Dean C. Borgman told Wall Street and European financial analysts during the Paris Air Show.

Borgman's presentation reviewed the company's current portfolio of programmes. Among his key points:

In response to a question, Borgman commented on the recent General Accounting Office (GAO) report criticising the Comanche effort.

"The weight problems identified by the GAO are not new. We have had the weight issue in our sights and believe it has been under control for at least two years now," Borgman said. He added that the Army is now reviewing the possibility of increasing annual Comanche production from 60 to 90 aircraft when the programme fully ramps up later in the decade.

Sikorsky also continues to compete aggressively in international markets, working to win new business in Ireland, the Nordic countries, Canada, Portugal and Japan. The company has several programmes under way in Europe, South America and Asia.

The S/H-92 aircraft is on track for certification in 2002 and first deliveries in 2003. Sikorsky believes the aircraft is an excellent candidate for US government business with the Air Force, which is expected to replace about 100 Combat Search and Rescue helicopters, and with the Marines for executive transport.

Sikorsky's World-wide Customer Service business represents a significant growth opportunity. From $600 million in annual revenue in 1999, Sikorsky has set a target to achieve WCS revenues of $1 billion in 2003. Nearly all of that growth is expected to come from government customers, Borgman added.

Australia Goes For Global Hawk
The Australian Government has decided that the results of the recent trial of the Global Hawk UAV were good enough for the aircraft to be include in their future planning. The United States Air Force Global Hawk high altitude, long endurance Unmanned Aerial Vehicle is listed as JP 2062 in the Defence Capability Plan 2001 - 2010, which was released today. 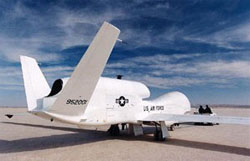 "Defence 2000" - the Defence White Paper issued earlier in the year, said that Defence would seek greater surveillance capabilities to counter illegal incursionsaround the coast and in territorialr coastlines and waters secure from

The Australian Department of Defence, which has marked down $100 - $150 million for this purchase in the Capability Plan, with delivery of the first aircraft scheduled for 2007, will seek information on the price and availability of Global Hawk aircraft with a view to seeking final approval for purchase in the year 2004/2005.

In addition the Capability Plan lists JP 129 Phase 2, a project for Tactical Unmanned Aerial Vehicles tailored for local area surveillance. This project is designed to enhance the ADF's ability to detect, locate and monitor military or other targets of interest. Again the Capability Plan provides for $100 - $150 million for the project with the first of these aircraft is scheduled for delivery in 2007.

Denel Benefits From Agusta, Swedish Deal
Denel, the South African aerospace and defence manufacturer has benefited from the deal struck between Agusta SpA, an AgustaWestland Company, and the Swedish Defence Material Administration (FMV) during the Paris Air Show at Le Bourget, for the supply of 20 Agusta A109 Military helicopters for the Swedish Army. 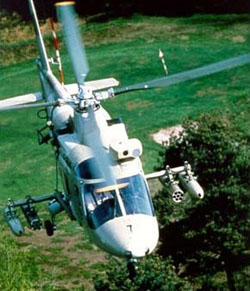 Denel will be contracted to build the 20 helicopter airframes at its Kempton Park facilities thus expanding on the overall direct South African participation in the Light Utility Helicopter (LUH) programme. The signing of the agreement with Denel for the license production and sale of the Agusta A109 LUH, A109 Power and A119 Koala helicopters is expected to follow shortly.

The Agusta and Denel partnership dates back to the Product Supply Agreement for the A109 Light Utility Helicopter programme signed last year. The agreement provides for a phased multiple year programme for the manufacture of the complete A109 LUH airframe and systems installation in South Africa.

Denel Aviation, the leading aerospace division within the Denel Group, will also be involved in the integration of subsystems, manufacture, final assembly, customisation engineering and flight testing of 25 of the 30 helicopters for the South African Air Force, and a team of South African technicians and engineers is being trained at the Agusta facilities in Italy. The first five helicopters will be produced and assembled in Italy.

Merlin Sonar Trainer For UK
Alenia Marconi Systems, Integrated Systems Division is in the process of commissioning a Sonar Trainer for the Merlin helicopter due for delivery in July 2001. 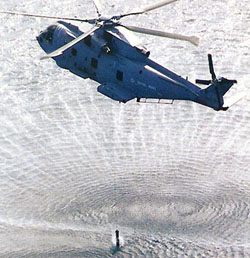 The contract will supply a sophisticated sonar trainer to the UK's Ministry of Defence and will be located at the Royal Navy's operational Training School at Culdrose in Cornwall in the UK. The trainer will provide integrated facilities for the preparation, delivery and assessment of initial to advanced continuation training for Sonar Operators and Controllers.

The trainer is designed to satisfy training objectives associated with Analysis, Classification and Location undertaken via scenario driven tactical exercises. The training is able to take place in individual, collective or adversarial exercises for 6 or more students. The exercises are designed to enhance individual operational and analysis skills combined with tactical decision making and also to improve communication and teamwork.

The Sonar Trainer's instructor station is used to create and control scenarios and assess trainees. The instructor is supported by comprehensive lesson preparation, briefing and debriefing facilities.

The sophisticated classroom trainer is based on Commercial off the Shelf (COTS) networked PC's running Microsoft Windows operating systems. The Sonar Trainer has been produced at the Integrated Systems Division's Donibristle site in Fife, near Edinburgh.