PC News Medal Of Honor Video Part 4
EA has released the newest video from Medal of Honor: Allied Assault. This Part 4 of the four part series on Mission 5 Level 1 shows the deployment to the Brittany Peninsula in western France.

Strategic Studies Group founders Ian Trout, Roger Keating and Gregor Whiley are not new to the strategy game industry. SSG has published great classics like The Ardennes Offensive, Carriers At War, Reach for the Stars and Warlords to name a few.

David Heath Director of Operations at Matrix Games said "We are thrilled at having SSG working with us. I personally have been a big fan of there games since the early eighties. These guys have made some of the best wargames ever played. We are very proud to be releasing there return to wargaming by publishing Korsun Pocket as well as a few other possible surprises.

The system includes two variants of the Small Diameter Bomb, a bomb carriage system, a mission planning system and logistics support. One variant of the 250-pound class bomb is equipped with an INS/GPS guidance system suitable for fixed and stationary targets. The second variant adds a terminal seeker with automatic target recognition capabilities more suitable for mobile and relocatable targets. Boeing has joined with Northrop Grumman on the mobile target variant. 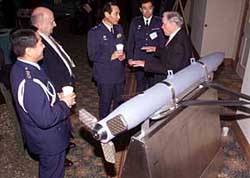 "The size and accuracy of small diameter bombs allows aircraft to carry more munitions to more targets and strike them more effectively with less collateral damage," said Dan Jaspering, the Small Diameter Bomb program manager for the Boeing Phantom Works. "We are thrilled to be selected for this program and will rely on our technology base and strong supplier team to move out very quickly."

Because of its capabilities, the Small Diameter Bomb system is an important element of the Air Force's Global Strike Task Force. Under the official title of "Component Advanced Development for the Small Diameter Bomb," the program is being conducted by the Air Armament Center and the Air Force Research Laboratory Flight Vehicles Integration Branch located at Eglin Air Force Base, Fla.

The Boeing Phantom Works R&D unit has successfully conducted a number of miniature munitions programs that have led to this current program. These include the Miniature Munitions Technology Program, which performed five consecutive highly successful drop tests; the Small Smart Bomb Range EXtension, which also successfully completed several flight tests; and the Smart Multiple Ejector Rack, which allows greater payload carriage with reduced maintenance. Boeing's Small Diameter Bomb program also builds on the Joint Direct Attack Munition, or JDAM, which Phantom Works helped develop and which has achieved a strong legacy of accuracy and reliability. More than 11,000 JDAMs have been delivered on time and on cost from Boeing's St. Charles, Mo., facility, where the Small Diameter Bomb team is located.

And like the JDAM program, the source selection process used by the Air Force for the Component Advanced Development phase of the Small Diameter Bomb program included acquisition reforms that significantly simplified and accelerated the process. These reforms included extensive exchanges of information with industry, oral proposals, and limiting submitted data to only that essential for the decision.

Within only five months after posting of the request for proposal, the Air Force was able to award the two contracts planned for this competition - one to Boeing, the other to Lockheed Martin.

At the end of this phase of the Small Diameter Bomb program, the Air Force will select a single contractor to perform both the System Development and Demonstration phase and the Production phase of the program.

The Air Force hopes to deploy the Small Diameter Bomb System by 2006 on the F-15E, followed by deployment on several other aircraft, including the F-22, JSF, F-16, B-2 and the Unmanned Combat Air Vehicle, which is under development by Boeing.

This paves the way to analyze the results and map future risk reduction and testing activities, said Eric Lekberg, program manager for the global air traffic operations -- mobility command and control program office. The tests were conducted at Holloman Air Force Base, N.M.

The Air Force is the Defense Department lead service for the joint program.

The Navy, which is developing its own JPALS variant for shipboard landings, had its first successes when an F/A-18 Hornet landed aboard the USS Theodore Roosevelt in April. This marked the world's first fully automated GPS landing at sea. 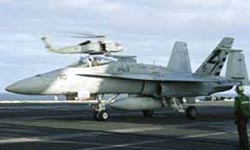 A small amount of error is inherent with GPS navigation. But with JPALS, a process known as differential GPS is used to acquire the needed precision, said Brian Pierce, a support contractor who provides acquisition and engineering support for the program office.

Finally, JPALS will use waypoints provided from the ground station to construct an approach path between the aircraft and touchdown point, Pierce said.

The pilot can fly this approach using standard cockpit instruments, or JPALS can be coupled to the aircraft autopilot to perform "hands-off," auto-coupled landings.

"The primary function of our ground station is to broadcast the differential corrections to the aircraft," Pierce said. "The approach path is calculated in the air, and the navigation equipment on board the aircraft connects the dots."

"We simply can't afford to have inaccuracies, because we're dealing with low-visibility landings," Lekberg said.

"This is one of the many features of JPALS that will contribute to substantial life cycle cost savings," Pierce said.

JPALS will allow the military to overcome problems related to the age and obsolescence of current instrument landing system equipment, he said. It will also afford much greater interoperability, both among systems various services use and between military and civilian systems. The Federal Aviation Administration is acquiring a similar system called the Local Area Augmentation System of LAAS, Pierce said.

The JPALS program office has been actively involved in developing the specifications for LAAS, making sure the civil and military systems are compatible. 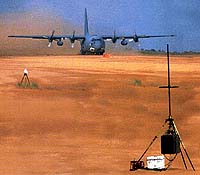 "The tests at Holloman seemed to verify this, as both an Air Force C-12J and a Federal Express B-727, without the military-specific features in its avionics package, each performed successful precision approach and landings to the JPALS ground station," he said. "Landings were performed with the pilots flying manual approaches and with the avionics and autopilot coupled."

The main distinction between the LAAS and JPALS systems, Lekberg said, is the military system can be deployed just about anywhere and makes full use of military GPS functionality.

"The military goes in harm's way," Lekberg said. "We clearly need a system that can provide safe landings in a GPS-jamming environment."

ESC and other agencies started looking into a differential GPS-based system more than a decade ago, said Richard Sheppard, a support contractor with the program office. However, it did not become formal until 1999 when DOD officials issued funding and put the JPALS name to it.

Even now, "it's very much an R&D-type program," Lekberg said. "We're trying to reduce risk as much as possible before moving forward."

Therefore, it is likely that it will be several years before JPALS goes into production, but one day it will become the standard, he said. (Courtesy of Air Force Material Command News Service)

Panic In New Delhi As 'Terrorist Fever' Creates Hoax Hijacking
The apparent hijacking last night of an Indian airliner flying from Bombay to New Delhi, which led to four hours of panic and confusion in India and around the world, was a false alarm caused by an anonymous phone call to the aviation authorities, officials said. [More...]

Russian Plane Crash Raises New Terror Fears
WASHINGTON/MOSCOW (Reuters) - A Russian plane from Tel Aviv carrying up to 78 people, most of them Israelis, exploded and crashed into the Black Sea off Russia on Thursday, rattling Western nerves as the United States lined up allies for a war against terrorism. [More...]