Flight simulations by their very nature are complex beasts, requiring much greater flexibility in control input than any other computer game genre. To this end many games peripherals manufacturers have brought out joysticks, and a few full flight control systems. One leader in the field is Thrustmaster, a company who for years have been building excellent sticks, throttles and pedals for flight sim fans who demand the ultimate in realism.

The Thrustmaster range of equipment is great for several reasons, mostly for the high quality products and the ability to program almost ANYTHING into them. This negates the need for the desktop pilot to constantly glance at the keyboard to hunt for that elusive key combination, just in time to see himself get blown to bits by the enemy who use those wasted seconds to line up the kill.

Prior to the Weapons Control System Mk II (WCS Mk II) throttle coming to the market, users of the Thrustmaster FCS joystick could, if the program supported it, use the hat and four buttons to access many more functions than the average two button joystick. This was great, but still left many functions consigned to the keyboard. With the release of the WCS Mk II, and later the F-16 FLCS and TQS joystick/throttle, users could program any key combination into their joysticks and save the files for instant download into their controllers, finally ridding them of the need to hunt around their keyboard and memorise a hundred different keys for the increasingly complex simulators on the market.

This presented a new challenge, that of actually programming the controllers. Thrustmaster provided a detailed book and basic programmer interface, but it was extremely difficult to use and operated solely through a DOS interface. This was the reason for making the CS Commander. What was needed was a familiar Windows interface where users could drag and drop keystrokes as well as set up difficult key combinations without having to learn how to program each file. CS Commander has provided this and more with their program, using pictures and a drag and drop interface to make programming a breeze, even for those with zero programming skills. 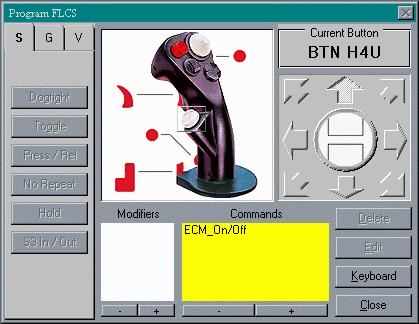 The interface itself is very simple. Upon booting the program, the user is presented with a blank screen and a row of icon buttons along the top, including a new set of icons which provide instant access to the original Thrustmaster utilities such as the TMScope calibration program and the keytest program. As most programs these days ship with some sort of Thrustmaster key file, it is usually just a case of downloading it via a simple point and click affair.

By the way, It is worth noting here that if you have ever had problems in downloading files due to the speed of your computer (Pentium II owners take particular note) this program incorporates a download delay setting which can be adjusted until a reliable download speed is achieved. This is a godsend to those of you who have cursed your seemingly inexplicable download problems due to the inadequate Thrustmaster download utility.

To re-program a key, you simply click on the relevant controller icon to bring up a detailed image and button layout. A list of macros available also pops up, and from there it is a simple matter of deleting the macros you don't like and dragging the new macro onto whichever button or hat you have selected. A macro is just a fancy name for a key combination, be it a single key such as "A", a complex one such as "SHIFT + LEFT ARROW", or any other keyboard permutation you can come up with. These are usually available as part of a file if one is provided, but again it is a simple matter of typing in a new name and assigning a keystroke if they are not.

A great new feature in Version 1.50 is the Keyboard Master. It allows you to generate any key to input into your macro files, including the RAW codes, which are the computer codes generated to the machine by the keyboard. These are needed for certain keys which would otherwise not work as intended. A good example is the EF2000 TIALD slewing mode, which requires the SHIFT key to be held down whilst using the arrow keys to move the view. This cannot be programmed by the SHF LAROW macro, for example, but using the RAW code generator enables you to input direct keystroke emulations into your Thrustmaster joystick. 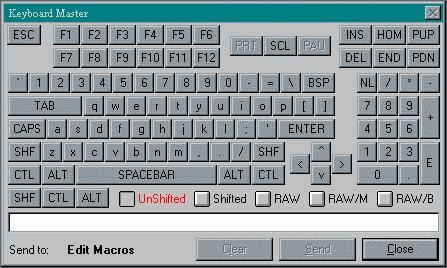 This feature is by far the greatest addition to the program, and will find many an existing CS Commander user (myself included) breathing a sigh of relief for the sheer ease of use it provides. Try building RAW code files under the original DOS Thrustmaster utility! What a nightmare!

More complex keystrokes and combinations can also be programmed. If you wanted to use a button to do one thing when pressed and another when released, you can assign multiple keystrokes with Press/Release modifiers. Modifiers are a great asset when programming, as they allow you to give one button many different characteristics.

The latest version also includes blank line generators to insert new commands above or below the line you have highlighted (see joystick image above for the + and - buttons). You can even use different brackets commands to repeat a sequence of keystrokes as long as the button is depressed, for example. Whilst all this can obviously be done with Thrustmaster's own system, programming them in the past was a tedious affair at best even for simple files.

With the TQS, the rotating antenna and range knobs are also much easier to program than with the original Thrustmaster offering, as well as the three stage selector functions (if you own the TQS you will know what I am talking about!) and S3 In/Out functions. The different mouse types can now also be specified in the program options for each file, meaning that you can choose which button is the left mouse button and which is the right, as well as providing options for using three button mice.

Creating a new file from scratch is also very easy with a Program File Wizard. The wizard asks you for the name you wish to call the file, what controllers you have and a few other items it needs to create the file for you. Your next order of business is to assign macro names to keystrokes via the macro box, with the final stage being to drag and drop these macros onto your desired buttons. As an example, I recently created a brand new file for "X-Wing vs Tie Fighter", and the entire keyboard map and button assignments took roughly ten minutes, of which the majority was spent simply assigning macro key names! Try doing the same thing with Thrustmaster's own DOS program in just twice the time....

Another great feature is the troubleshooting tool. Once you have created your file, you need to download it. At this stage the program may report an error in downloading. It is then a simple matter to use the troubleshooting tool to check out the error code returned or the line error. Usually it will be a spelling mistake in one of the keystrokes you have assigned, although this type of error should now be a thing of the past due to the new Keyboard Master. There is no longer any excuse for the incorrect spelling shortcut of a key! A quick check of the macros will reveal the error which can be easily changed.

To help in remembering your complex file, it can be graphically printed out to instantly identify which buttons do what. This is a great feature as you can then understand where all the buttons are, as well as looking at the overall picture to better assign types of controls such as targeting or countermeasures systems onto one hat, for example. 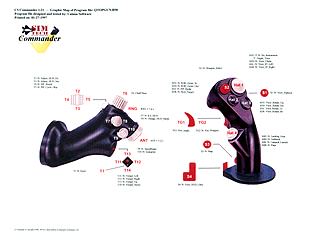 Overall, if you have spent the money on Thrustmaster controllers, it would be a serious mistake not to invest in this program. Not only is it extremely easy to use, it is also a much better way of managing your Thrustmaster files and programming your own. No file given out by the manufacturers ever seems to be perfect, and this program lets you change it in a simple and reliable way to give you much better results without knowledge of the Thrustmaster programming interface.

Finally, Simulation Technologies, the makers of the product, provide excellent support via free patches as well as special CD-ROM upgrade prices for existing floppy disk version users (definitely worth it when you consider the fragile nature of floppies and storing patches for the program). I had my CD-ROM within five days of ordering via fax, and that was shipped from England to Australia! More screenshots can be found at the Sim-Tech Screenshots page.


(CS Commander is Windows 95 and 3.1 friendly and supports the FCS, WCS Mk II, F-16 FLCS (all editions), TQS, RCS and F-22 Pro controllers. It is available on 3.5" disk and CD-ROM through good PC aviation stores. Version under review was the CD-ROM edition with the new upgrade patch version 1.50c)
Download the CS Commander 1.50c Update for Disk

Go to the Calana Software Site