E3 features more than games, simulations, controllers and hardware. I saw an example of software from TGS Inc. called 3 Space Converter that allows inexpensive, $400, 3D modeling. It will not import and allow morphing for flight sim files as we know them, but I believe that someday soon something like it will.

3 Space allows conversion of CAD-CAM files to the PC without the expensive, full-blown workstation. It can modify and model in 3D, but, alas, not, say, EAW's .3DZ files. Theoretically, if the file can be imported and converted into a readable format, changed, converted and exported it would make all simulator graphics modifications easier.

If one of these companies were to build a product that could also take the gaming community's files and allow modifications, I believe they'd realize some revenue from a whole different market segment. Those that hack, as I did when I had time, think nothing of spending hours creating and modifying files for their favorite games and sims. I found myself directing more time to mods than flying at times.

FLY BEFORE YOU BUY

I fondly remember Egghead Software when they had retail stores. The guys there had a PC set up with every about game in the store on it for customers to try out. I purchased Aces Of The Pacific after flying a Corsair, gunning three Zeros and making my first carrier landing!

So where do you try out a game? Most of us do not want to shell out $50 just because of pretty box graphics. There is another group of us that may be without the needed funds all at once. Extent delivers games and simulations online at a pay-per-use rate that could be as little as $1 per hour! 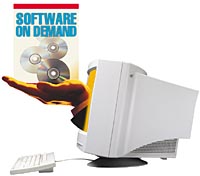 There is no long download to get kernels of games that still must be accessed at a high rate per hour or month. You could play one game one hour and another the next. You could subscribe for a longer term if you want. Why get married when you can have many girlfriends?!

Any application is feasible. Want to use the latest Photoshop or Quark Xpress design software that can cost up to $800 if purchased? Pay per use and laugh all the way to the bank.

It will probably be the next generation in software distribution. Think of it. Instead of the usual marketing circus of paying for the shelf space of boxed games, promotion, advertising and all the expensive hoopla, companies could put their titles online. Play and pay. If you really like the title you could hit a link and purchase it online and have the boxed CD delivered to your home at a much lower rate than from a retail location.

Developers could do inexpensive add-ons, fixes and modifications in real time. They could stay with a title and evolve it in a way that could not be duplicated now. A game is only as good as its initial sales in the retail market. Just try to find it six months from now. There is another one being developed with all the focus on it. Last season's new title is virtually abandoned. This concept could change that.

MY CD IS RUINED!

No more boo hooing when your favorite game, sim, ROM, or music CD is damaged with a scratch! That's right; Azuradisc can repair it. I watched as a CD was raked across the cement pillar of the L.A. Convention Center transforming it into a piece of plastic trash. The six step process of polishing progresses in incremental steps from more course media to a spongy final buff. The CD is cosmetically perfect and guaranteed to play.

The compact machine is not intended for the user but for the retailer with its high cost. The idea is to be able to go to a local store- a test program is underway with COMP USA- and get your beloved game or out of production music CD renewed for maybe $3-5! Even if you are a registered software owner you have to send money to the manufacturer for a replacement to the tune of $15. And of course you have to wait.

Why not cruise over the COMP USA and have it renewed while you wait a few minutes? Even if the cost were similar to a replacement disc you'd have it immediately. I expect these handy machines to appear in DVD rental locations for use in renewing their rental discs. If they are enterprising they should advertise all types of disc scratch removal and pay for the machine! If you are far from a retailer with the machine, Azuradisc offers a mail-in program for you with fast turn around service.

WAKE UP & SMELL THE GUNPOWDER

One final, esoteric item I found intriguing was a flyer for Digiscents. I was unable to explore more about it at the show but will follow up if it holds any promise for combat simmers.

The concept touted is that scents associated with interactive games, music or movies can be downloaded to enhance the experience. What type of device may be needed to accomplish the technology by users I do not yet know.

But think of it. You have your force feedback stick, a sound and feedback chair and the aroma of petrol, oil, exhaust and cordite when you fire your guns! Maybe. We'll see.