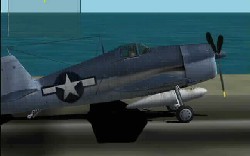 On the carrier deck


The speedy second B-25 was hard to catch but astern from 175 feet I sprayed 7.7s into the left engine. All my 20mms were used shooting down another. I got a little fire going. The flames glowed from the cowling. No defensive fire. Obviously the Mitchell was out of ammo from the earlier bombing run and defensive actions. With 100% realism on guns and ammo I could not take him out. Tough, but in European Air War I would have bagged three or four. I expended the last BBs from my A6M2 Zero and banked away.

Saburo Sakai's words about turning inside the enemy from his book, Samurai, drifted back to me earlier as I kept whittling down the separation between my fighter and the enemy. Flying at 11,500 feet the Zero had been making about 270 MPH--about right chasing the unladen B-25. I used his tactics with the superior turning power of the Zero and carefully used short bursts on the fast flying B-25. But to no avail. The sturdy American plane would probably make it back to its virtual home. More realistic. 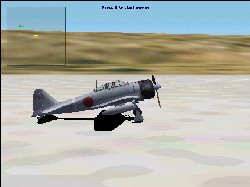 
SetupThe two-disc installation went as smoothly as the pre-Beta version I previewed. The myriad 250-plus joystick, keyboard and game settings were still there. No one should want for adjustments in this sim. The CFS I control layout is available on installation but you can customize and save a named setup of your choosing. You will probably want to adjust your settings between missions as you see how you like them rather than attempt to get them right from the outset.