The Onramp to F4Plus:
A Guide to Patching Falcon, One Stitch at a Time
by Bob "Groucho" Marks

Cha-os (ka'os), n. 1. a state of utter confusion or disorder; a total lack of organization or order. 2. the current state of the officially discontinued Microprose Falcon 4.0 now that every programmer and his dog have created patches, enhancements, and new executables.

Sometimes a little confusion is good. It can be a self-protection mode, a sort of circuit breaker that keeps a person from snapping like a cheap fan belt. As far as responses to perplexing situations go, having one's eyes glaze over and mutter "to hell with this" is vastly preferable to losing it entirely and employing a crowbar to "adjust" your computer settings.

When it comes to employing the various patches, cockpits, and executables home-brewed by Falconites all over the world, it seems that the confusion breaker has tripped in more than a few folks. We have gone over some of these patches and the like ad nauseum in previous F4Plus installments, including the socio-legal implications of them, but have not yet looked at how to patch this monster. Returning sim addicts who want to give F4 another chance and newbies alike have called out (both via email and forum posts) saying "Really cool, Marks, I'm glad F4 is fixed now. But I'm about to go into my tool shed and grab a heavy bar of hardened steel and knock this sumbitch across the room because I CAN'T FIGGER THIS PATCH THING OUT!" Or words to that effect, anyway.

It's OK---Falcon 4.0 has mutated into a fantastically complex beast during its resurrection and it can be a damned intimidating task to sort out what it takes to make F4 into F4Plus. So, put the crowbar down . . .that's it . . .and let's patch this sucker. 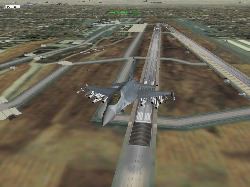