Have you noticed how the PC simulation world and the real world are growing more closely tied? One of the goals of Combat Simulations is to enhance your sim experience by providing you with news and information about the real world counterparts to the armor you command and the aircraft you fly and the boats you captain.

Digital Image Design, much like Janes Combat Simulations, is intent on realism and an experience that simulates that larger combat environment, with all its complexities. Toward that end DiD has ties with the real world military and also with a civilian intelligence agency that is as well respected as Janes.

F22: ADF will be bundled with a publication by World Air Power titled Allies & Adversaries. At almost two hundred pages its a great added value feature, chock full of information on... you guessed it! both allies and adversaries you will meet in F22.

The World Air Power journal was first published in the spring of 1990 and is concerned entirely with modern military aircraft. Its an all color journal and has NO advertising. Produced quarterly at 160 pages, it provides in depth information on the worlds military aircraft right up to the limits of classification.

Each volume of the Journal has a central feature describing one major aircraft type, forming a kind of "monograph" in its own right. In "Allies and Adversaries" the monograph is dedicated to the F22 Air Dominance Fighter, including pages 9-24. Page 24 is a fold out with detailed descriptions of every sub system and a color schematic on one side of the page, and a rendering of the F22 in relation to its systems from the original design paper on the other side.

The rest of the book breaks down like this:

Transport aircraft, three civil aircraft, and tanker aircraft complete the volume. Lets take a look at the newer Sukhoi, the Su-35. For information on the Su-37, see our dedicated Su-37 page.

The section dedicated to the Sukhoi Su-35 comprises eleven pages. Color photos and a schematic are included, and detailed operating specifications are found throughout the article. From a brief history of the Su-27 to an analysis of the strategic factors contributing to the upgrade, the article places one squarely in the flow of modern air power. Here is a sample:

The Su-35 has a modern glass cockpit with three multi-function CRT displays. These mark a major improvement over the traditional "steam-age" analogue cockpit of basic Su-27 but have traditional input buttons surrounding them rather than the throttle and stick mounted controls of those fitted to the MiG-29M.

The Su-35 has a reconfigured tailcone with a reshaped tip. THis is a dialectric radome rather than the usual brake chute cover, perhaps tying in with oblique references to rear hemisphere radar coverage and "over the shoulder" BVR missile capacity.

The Su-35 has a new multi-mode radar, probably designtated N-011, with significant air-to-ground capability. This may be related to the N-010 radar of the MiG-29M, itself a version of the Fazatron "Zhuk." More importantly, the radar has much improved processing, allowing up to 15 targets to be simultaneously tracked, and six to be engaged at ranges out to 362 Km (225 miles).

Do you get the feeling that this is a significant adversary for the F22? Even the rear facing radar is very powerful, able to discriminate a fighter sized target at 250 miles. As for weaponry, the Su-35 can mount new long-range anti-AWACS weaponry (the Novator KS-172 AAM-L or the R-37), whose range can be further extended by the addition of a separate booster. The following information comes from Rick Bourassa:

First revealed early in 1993, this heavy missile marks the debut in the AM field of the little-known Novator experimental bureau. The specification for this weapon was issued in mid 1991, probably as armament for the Su-27 and -35. If it flies, this impressive missile will be the world's largest and heaviest air to air missile. Launched by a solid-propellant tandem booster, the KS-172 will have a maximum range of 400 km (249 miles), attacking its targets with an adaptive high explosive fragmenting warhead. The initial flight phase will be under the command of an inertial guidence system, receiving updates on target position via a command link. In the final stages of flight, it will switch to an active radar homing head. 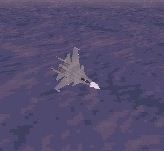 And more from "Allies and Adversaries:"

In addition, the supersonic, passive radar homing, long range Kh-31P can be used as an air-to-air anti-radar missile, especially against vulnerable allied aircraft like the E-3 Sentry AWACS platform or the E-8-J-STARS. Russian tactical doctrine emphasizes the importance of such aircraft as targets, and the best and most experienced pilots are trained in co-ordinated attacks against such aircraft and their fighter protection...

How much are these tactics and weapons systems modelled in ADF? The Novator is not in ADF and you won't find rear facing radar modelled.. maybe we'll see this in TAW. But you will see the Su-35 and these will be one of your most formidable opponents. We'll try to find out more about the inner workings of ADF AI.

The section on the Eurofighter comprises 13 pages. Again, this section is packed with info, photos, and a color schematic which lists critical components overleaf. The section on the MiG-29M comprises 12 pages and is the same layout. In case you are not aware, the M variant is a very significant upgrade to the original design and this is a far more capable aircraft. The "Fulcrum" is another significant opponent that you will encounter in ADF.

One of the most interesting sections of "Allies and Adversaries" for me was the MiG-21 "Fishbed" Upgrade section. The MiG 21 has proved to be a competent and long lived platform, and late-model "Fishbeds" have increased fuel capacity, more powerful radar, and better armament. With a variety of upgrade programs among a variety of nations, some variants of the MiG-21 can mount the most modern weapons from western and soviety arsenals and some have entirely new avionics designed around digital databuses. The MiG 21 is fast, with superb acceleration and an excellent rate of climb, and is agile and presents a very small frontal radar cross section. In a knife fight this is a dangerous opponent!

By now you have a good sense of the book and its value. Its quite excellent and this is a great addition to the ADF package. You'll see most if not all of the aircraft and weapons covered by the book in the simulation itself....

If that weren't enough, we have new information on the Tours disk that will be released in January for ADF. "Just when you thought you'd cleared the skies of hostiles three new conflicts erupt in the Red Sea theatre. Over thirty new missions including extensive AWACS duties will test your skills to the limit...." DiD has stated that their intention is to provide a greater sense of immersion with semi-dynamic AI as they move toward the TAW release. Should be good!