Csim: Interaction and flight control were strengths of F3. How much control will a flight leader have over his wingmen in F4?

Leon: Flight lead will have a large degree of control over his wingman, both in his formation, as well as his actions. The flight lead can designate targets, send off and recall the wingman and change or re-arrange the formation.

Csim: Tell us about the command structure for a flight? Will it be hot keyed or menu driven or both?

Csim: Will we be changing radio channels to communicate with ATC, FAC, AWACS etc?

Robin: There are multiple radio channels for various different elements in the game, like AWACS, your flight etc. You can reduce the amount of radio traffic by filtering these out, to the smallest set of channels you require at the moment.

Csim: How much interaction will the player have with the flights he escorts?

Leon: All missions in the F4 campaign world are built as a package. Packages can consist of escort, strike, SEAD and recon elements. All elements of a package need to work together to suceed. 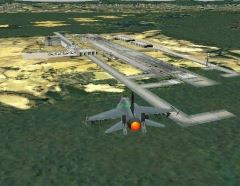 Csim: iF22 broke some new ground in the area of ATC, and DiDs F22 looks set to do the same. How is this handled in F4?

Leon: F4 will include ATC for takeoff, landing, and ground maneuver.

Csim: Intelligence plays a major role in real strategic decisions. How will you give the player intel data in F4?

Robin: We have a whole Intel section within the campaign. This will show you various troop moral levels and strengths. We also have a continuous situation report as to what targets are being attacked and captured by each side. These are displayed as flashing dots on a small map, so you can instantly see what areas the enemy is concentrating on.

Csim: Tell us about object and weapons modelling in terms of physics and realism. Will we see moving turrets, rotating antennae, pilots heads turning....? Will it matter on which side a weapon impacts a tank?

Leon: As far as moving parts, we have turrets, guns, elevators, swing-wings, antennae, ailerons, flaperons, landing gear, speed brakes, etc. For A/C it matters which side gets hit, since ordinance is carried on each side, but it won't really matter for tanks, at least in this version.

Csim: Damage modelling has been another big growth area as CPU power has increased. What kind of damage modelling will we see in F4? Will damage in one system affect another?

Leon: F4 models each component of the A/C separately, and each component takes individual damage. Obviously, if you damage the radar then you are going to have a problem with aim-120's, but if you're careful you can still use your aim-9's. Damage to the fuel system affects the engine, which in turn affects the flying qualities, and so on.

Csim: In Activisions coming sim damage to the aircraft is based on actual trajectory of the weapon and each part of the aircraft is modelled separately rather than a probability model. What will F4 model in this regard?

Leon: We use a monte carlo simulation to decide what damage is done. The simulation does take into account the weapons trajectory, but there is no gaurantee that the first bullet will always damage the same thing. When the Air Force does their damage tests with live fire the results are probablilties, not absolutes. 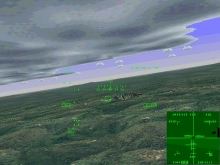 Csim: Will we see secondary damage effects? For example, if I destroy a building and a soft target is nearby will there be blast effects?

Robin: There are secondary damage effects, and the blast radius is taken into account. You can even see the blast wave expand after you have blown up the original target.

Csim: What is your target in terms of maximum challenge to the hardcore pilot?

Leon: We expect Falcon 4.0 to appeal to a wide variety of consumers, especially the most hardcore pilots. Things like mid-air refueling and the fully dynamic and real-time campaign will appeal to the hardcore crowd. We also have simplified radars and flight models to address the needs of the novice flight sim players.

Csim: The screens look great. What can we expect in terms of resolution options and detail options?

Robin: We can run anywhere up to 1600x1200 at the moment, although the video card and monitor to do that is very expensive, and frame rate is lower, we have that ability. We have multiple visual sliders that alter the ammount of visual texturing, alpha blending, terrain detail, object detail etc...

Csim: Will we see a wind model in the sim? What about weather?

Robin: We have a full weather model in the sim, with weather moving accross the map as time progresses. Wind is modelled as part of the weather model.

Csim: Frame rate is often a snag for the newest simulations, but with Voodoo 2 and other new 3d technologies in the offing F4 is touching down at a good time. What can we expect to see in real nos. with all detail options on running on a P166 with 3dfx? What will be the recommended system?

Robin: We are currently running about 12-15fps on that type of system, and we haven't finished optimising yet...

Csim: Support for D3d is a given. Will there be proprietary support as well?

Robin: We have support for all cards that are supported by D3D. Also a number of video card manufactures are helping us develop custom drivers for proprietary support. This will allow us to use more features than a D3D driver would. Currently that list includes 3Dfx and the Permedia II chipset.

Csim: Will WIN95/98 take a lot of overhead that DOS game don't have? Will we be able to easily ALT TAB to win95 to continue Win95's multitasking or will F4 take all necessary resources to run?

Robin: We are a huge application, and Windows 95 takes up a lot of space. The biggest problem is memory. Windows virtualizes all memory, so getting to that memory sometimes takes a lot of time. Once we are in memory however, things run smoothly. We do not recommend running any other software while running F4, since they would take up our valuable memory. And since we don't recommend running other software, please don't ALT TAB away. Obviously the game is so good, you probably want to have us startup automatically when you reboot you Falcon 4 PC.

Csim: How will new technologies like AGP impact F4?