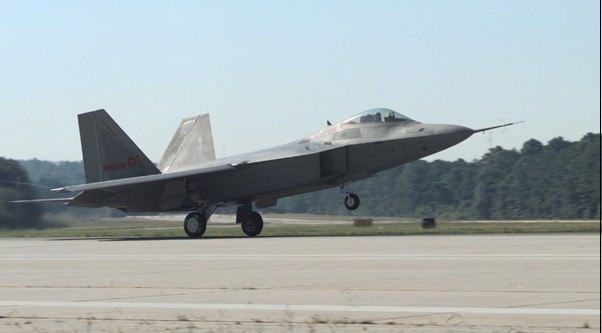 F-22 RAPTOR SOARS IN FIRST FLIGHT, MARIETTA, Ga. (September 7, 1997), The first Lockheed Martin-Boeing F-22 Raptor air dominance fighter for the U. S. Air Force was flown for the first time today, taking to the skies over Marietta and north Georgia.

F-22 Chief Test Pilot Paul Metz flew the aircraft from Dobbins Air Reserve Base here, lifting off the runway at 140 knots with the aircraft's two Pratt & Whitney F119-PW-100 engines at military power. The aircraft reached an altitude of 15,000 feet in less than three minutes, then was put through a series of power changes to test aircraft handling characteristics and engine performance

Midway through the flight, Metz climbed to 20,000 feet and retracted the F-22's landing gear. He then conducted more engine transients, evaluated the jet's performance in "clean" configuration, and flew formation on Beesley's F-16 to evaluate precision handling characteristics before landing back at Dobbins ARB. The flight lasted just over an hour.

"Bringing the airplane to first flight marks the end of the beginning, to steal a phrase from Winston Churchill, and it is the greatest single event so far in this fantastic program," said Tom Burbage, the F-22 Team Program Office General Manager. "The entire Air Force/contractor team has worked very hard over the past six years to develop the F-22 and get to this point. Now it is time to test the Raptor, start production on schedule, and then get the aircraft fielded."

"The F-22 takes military aviation into a new era," added Walter N. Bylciw, Pratt & Whitney senior vice president-F119 program. "We are honored to have played a role in this historic event, and to continue as partners in a program so vital to the peace and security of our nation."

The F-22 will be ferried to the Air Force Flight Test Center at Edwards AFB, Calif., in the spring of 1998. Once there, the F-22's performance will be measured at all required flight regimes.

The first aircraft, referred to as Aircraft 4001, will undergo roughly 50 test flights prior to delivery of the second aircraft (Aircraft 4002) to Edwards in mid 1998. Aircraft 4002 is now in final assembly at Lockheed Martin Aeronautical Systems in Marietta and is scheduled for completion in late spring 1998.

The F-22 is widely regarded as the most advanced fighter in the world, combining a revolutionary leap in technology and capability with reduced support requirements and maintenance costs. It will replace the aging F-15 as America's front-line air superiority fighter, with deliveries beginning in 2002.

The F-22's combination of stealth, integrated avionics, maneuverability, and supercruise (supersonic flight without afterburner) will give Raptor pilots a "first-look, first-shot, first-kill" capability against the aircraft of any potential enemy.

The F-22 is designed to provide not just air superiority, but air dominance, winning quickly and decisively with few U. S. and allied casualties. The F-22 also has an inherent near-precision air-to-ground capability.

"This first flight was very successful and the Raptor has wings," said Metz, who is also the F-22 Team's chief test pilot. "Now we have to make sure it has talons."