Wondering what the difference is between the AIM120c vs the AIM120r? Simply put, the 120R is enchanced with a ramjet, increasing its range from 31 miles to 44 miles. You will often find both types in your loadout. If you need the extra standoff ability use the 120Rs.

You can watch your wingman engaging a target in battle by going to wing padlock and then using SHF F4 to reverse the view.

While its often a great idea to approach an encounter from a higher altitude its sometimes better to approach low, especially if you are forced to approach from the front aspect in a VIS-IDENT situation. Many older radars have look down deficiencies and you can take advantage of that weakness by coming in low.

Remember to PUSH 2 in order to listen to other allied comms in the theatre. This really works well when you jump in to fly a mission in the AWACS component but you still want to know how the other flights are faring.

ACMI has two options. You can use ALT R to start a recording at any time during a flight, but you can also use SHF A to bring up the AWACS screen while IN FLIGHT and continue flying while you monitor the action. If you use this latter option you can use "5" to record a message that will act as a bookmark later. For example, type 5 then "at this point I first had an IR contact," or "at this point I was first locked by hostile radar."

F3 accesses the threat/missile lock. However, its from the perspective of the cockpit so the missile will not be in visual range until the last moment. Don't wait til then to dump countermeasures and jink!

When a missile is inbound switch to minimum sensor range so that you have the best perspective on your defense MFD.

The "s" key is used to make manual shoot list entries. If you have already generated a shoot list but now have a high priority targetting need use "u" to clear the list and then padlock your target (F3 or F4) and then use "s" to designate. I have all three of these functions on my T1 key on my TQS.

The declutter function is very useful since at this point its possible to padlock targets BVR. The 'J' key removes clutter from the HUD in favor of the target at the head of your shoot list. Declutter is a toggle on/off function for the following symbology in the air-to-ground and air-to-air HUD modes:


Looking for a way to jettison internal fuel? This is not possible in ADF.

You jumped into an F22 in the AWACS mission, took out the hostiles, and then jumped back to AWACS to see how other units are faring but still want to keep a close eye on the flight you just left? No problem, just stay logged on that flight or click on it again if you have accessed another flight and you can watch and listen to the ongoing sortie.

Difficulty in the sim has three levels:

At low and medium difficulty levels you also have some additional help in terms of targetting. Targets that are required to be destroyed in order to complete the mission are shown with the letter "T" adjacent to them in the HUD display, but only on the Easy and Medium difficulty levels. Mission objectives can also be viewed from the in-game map by pushing the "DEL" key on the numeric keypad. 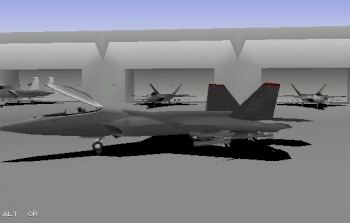 At easy and middle difficulty targets that are required to be destroyed are shown with the letter "T" in the target information on a MFD. The target information is shown when you position the mouse cursor over an aircraft symbol in the Situation, Defense or Attack displays. The flight call sign is also shown, as given objectives.

The size of the missile steering circle in your HUD relates to the probability of kill. As you approach a locked target the circle will grow larger and then eventually start to grow smaller. The larger the circle the higher the likelihood of a kill. Launch when the circle is largest.

Handing off a target is equivalent to locking a target and calling ENGAGE. If you lock up a likely target, put your wingman in a sweep formation, and then perform a manouver like DRAG yourself, you can call ENGAGE on that target with one keystroke (M).

The weight of cannon shells is modelled so if it looks like you will be in close in a fight fire off shells down to 600 or so for better manouverability.

Unfortunately, blast effects were not modelled for ADF and this means that A2G missions are more challenging than they should have been. In many cases you will have to score a direct hit on a target to get a kill.

There is no lag between a SAM lock on your aircraft and the launch time. In reality SAMS need about a minute between their lighting you up and the actual launch. You won't have much reaction time so be prepared!

If your gamma settings on 3dfx are not working in ADF try ALT F7/F8. But you may have to wait for a patch.... 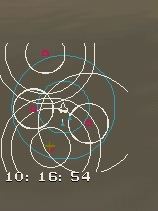 Note the cut above from a screen shot of the on screen MFD repeater. In this shot I am moving between the estimated detection ranges of some ground based SAM units. If you increase your throttle up and down you will see the size of these circles change. This is because as you increase your IR signature your IR cross section also increases. Reduce emissions to stay stealthy.

The Defense MFD (left) will provide info on the effect of your current EMCON level upon enemy electronic detection ability. When you raise your EMCON levels you will notice the enemy area of detection as displayed on your MFD increases with the increase in your EMCON level. In the same way the RCS of your F22 increases if you are passing the width of a detection source as opposed to a direct approach since the surface exposure of your aircraft is greater. However, ADF does NOT model doppler as opposed to pulse effects.

In ADF the actual RCS of the F22 is not modelled, being slightly downgraded for the same of gameplay. Nevertheless, stealth is important. You can stay stealthy but what will your wingman do? He will follow your lead and use the EMCON settings you choose unless you order him to ENGAGE. Be aware! This means that if you go to EMCON ONE he will too and this will disable his auto chaff and flare and ECM and MAW.

At EMCON TWO and EMCON THREE your MAW is inactive and you will have no warning of missile launches. At EMCON ONE, TWO and THREE auto countermeasures is off. At EMCON ONE your radio will not transmit.

Page 71 of the manual will lead you to believe that you can cue an AMRAAM by off board (IFDL) information and then launch while in EMCON 1. This is not correct. AMRAAM is disabled in EMCON 1 and you must switch to EMCON 3 minimum for a launch. However, you can launch the AIM9x in EMCON 1 and 2 using IRST cueing.

The workings of the integrated sensor systems can be confusing. Most plane's avionics are made up of several independant systems, so the pilot can use either the IRST, or the radar to obtain a lock on another plane. But the F22 works in a very different way. The information from all the different systems, (IRST, radar, etc...) is pooled together and displayed on the situation, defence and attack MFDs.

The idea behind this is that the pilot does not need to know which of his on-board systems is supplying the positional information for a target, he only needs to look down at one of his MFDs to get the whole picture. This lowers the workload placed upon the pilot. The advantage of this is that it stops the situation where the defence display is showing a threat which is not shown on the radar because it is outside the radar area. All displays present the pilot with the same situation, it is only additional information, (radar ranges, weapon range etc...) that is different.

Test this out in F22 ADF by switching to Emcon 1, (radar off), and looking down at your MFDs. Planes ahead of you within IRST range, will still be shown in your MFDs, even though your radar is not active. They can also still be targetted, and AIM9Xs can be fired at them. Basically, the MFDs do not just show objects picked up by your radar, they show everything that your avionics can locate, whether that info comes from your radar, IRST, or by picking up radar from another object.

As a result, damage in one system may appear to limit another system. In reality it does not, but the integration of systems can give you that impression. Also, if you have taken damage to radar and your up front MFD you may assume that your IRST is damaged also, but it may not be the case and you may still be able to target with AIM9x.

F22: ADF is one of the most sophisticated simulators ever released for the PC. However, there are times when you just want to dive in and engage some enemies, and for that reason ADF DOES include a Quick Combat interface. 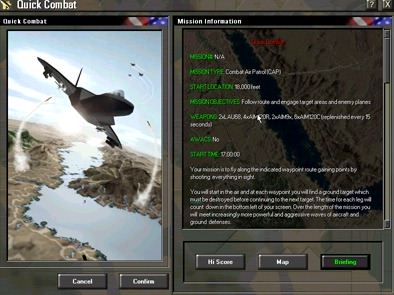 Quick Combat is an intense and lengthy mission lasting five hours. You must follow the waypoint route destroying targets as you find them, and then renewing your weapons. At each waypoint you will find a target on the ground which must be destroyed, while ever more dangerous waves of enemy aircraft and SAM's will rise to attack you along the route.

At each waypoint, you will find a ground target that carries a high points score for destruction. Points are awarded by a points multiplier system; i.e. the more points you earn the more the points multiply. However, should you hit your own side there will be a corresponding loss of points. 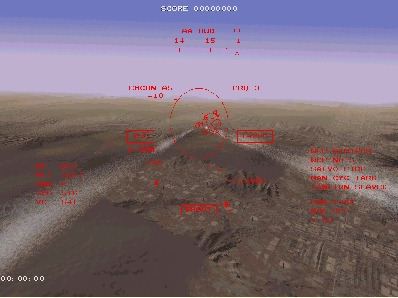 In general, higher points will be given for higher score targets; e.g. a tank is worth more than a truck, but a greater score will be given for a specified ground target within the mission. The highest scores will be displayed in the Quick Combat Hi Score table.

Fuel will be limited to what you can carry externally, and a refueler will stand-by before the last waypoint - just in case. One weapon of each type carried will be automatically replaced every fifteen seconds.

You will fly under a time limit and the counter will be obvious in the lower left hand corner of your screen. You have twelve minutes to reach the second waypoint and destroy your allocated ground targets (there are two). Any remaining time will then be added your time to the next waypoint.

The refueller is not available in quick combat (the comms messages are "Greened Out"), but in case you have taken damage (a good possibility because of the AAA at waypoint 2) when you score 5,000 points your aircraft is repaired back to A1 condidtion.

You will notice massed flights of enemy aircraft, as many as forty will appear but they don't attack you. This is basically a duck shoot opportunity. Take some shots then move on.

Remember to make use of solid tactics in Quick Combat. Go to EMCON ONE when approaching more sophisticated enemies and don't approach them head on. Its also wise to climb to an altitude that allows you to launch at greater distances.