Home Archive Forum About
Battle of Britain I

This is the account of Witold Urbanowicz's first sortie in the Battle, and his first hard-won victory. At the end of the Battle he was the most successful Polish pilot, credited with 17 victories.

"I checked again that the guns are ready and the gunsight lights up. I adjusted the oxygen mask, the microphone, and checked that I am tightly strapped in. A dogfight with German fighters was inevitable. I was certain that in view of their numerical advantage there would be losses on our side.

Suddenly I noticed four fighters coming from the direction of England. I was glad that there would be more of us. I kicked the plane to the right to make room for the newcomers. I looked the other way, and to my horror saw a Messerschmitt 109 no further than 300 yards away. He was a little below and was heading straight towards me. The black crosses were clearly visible. And those coming from over England were also Germans.

"Messerschmitts attacking from the rear!" I shouted on the radio.

At this moment, from above, Messerschmitts dived on us. There were over 20 of them. The squadron broke up in all possible directions, like a flock of pigeons being attacked by a hawk. In such circumstances it's the best tactic. The enemy loses orientation and the squadron ceases to exist as a single target. (...) The enemy has to break its formation as well. The battle becomes a series of individual duels.

The three Messerschmitts attacked me from below, and behind. The single Messerschmitt was attacking from the side. He probably was their leader. I felt hot in my whole body.

At first I intended to attack the single one, but very quickly I changed my tactic. I realized that even if I shot down the single Messerschmitt, the other three would get me for sure. You have to die one day, but not yet, I thought to myself.

My intuition led me to attack the three planes head on, to maximize the surprise. The possibility of collision frightened them so much that they dived and disappeared for good. Probably they engaged in combat with some other fighters. I wasn't so lucky with the single Messerschmitt. While my situation a while ago seemed hopeless and my actions had been a little hot-headed, he had the opportunity to watch me calmly. He turned out persistent like a dog. Apparently he decided to shoot me down and trusted his abilities. My thoughts went along the same line: Shoot down the bastard. (...)

A fierce horizontal dogfight ensued. For the most part we were on the opposite sides of a circle. My throat was absolutely dry, the first sign of the nerves. I was afraid that another opponent might show up. (...)

After several circles I realized that my opponent was no weakling. And I was sure he wanted to get me. He had a faster plane, he could have withdrawn if he wanted to.

For one moment I had him in my sights, but that was only a split second. He pulled up quickly. I followed him in a sharp climbing turn. I felt the centrifugal force pulling my cheeks away. (...) The German went into the opposite turn and was already closing on my tail. I did the same, and evaded him.

I was losing consciousness: typical reaction caused by the drainage of blood from the brain. Or had I been hit by a bullet? The sky turned red, then black. (...) When I came back the German was closing on me again, he fired a few short bursts but the deflection was too big, the tracers missed my plane by a few yards.

If anything, the dogfight became even more fierce than before. I could see the sun, the shining waters of the Channel, the sky. And white umbrellas of open parachutes. And planes with trails of black smoke drawing arcs in the sky.

Suddenly the Messerschmitt broke away and went into a dive, at full throttle. I was so preoccupied that I hadn't noticed what was going on around us. We flew into a whole swarm of Messerschmitts. I had never seen so many black crosses before. It felt like being in a flying cemetery.

My opponent started acting very strangely, doing some odd aerobatics. But it lasted just a few seconds. I never left his tail, but I didn't fire, I wanted to have him in my gunsight clearly and up close, so as not to waste a single bullet. The other Messerschmitts never attacked me, in this chaos it was close to impossible. They also probably had other things to take care of. (...)

My opponent finally lost his nerves. He turned his plane over onto its back and dived in a beautiful arc towards the widespread, green waters. This gave me the first moment of respite. For the first time I noticed the white wave tops. (...)

We were alone, just above the sea. Not a soul, just the two of us. Gloomy scenery. The final showdown. If the German wants to withdraw now, it's too late: my aggressiveness has grown. For a short while we are so close to the water, that we nearly touch the waves with our wingtips. 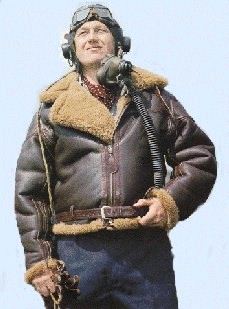 Yet another flash of doubt: Maybe I'll lose this fight? The stronger wins, it goes through my mind. We started shooting wildly, just provoking each other. We both wanted the other to run out of ammunition, the bullets splashed in the water like rain.

Another surge of hope: there's a man in the other plane as well, he must be fighting with the last of his strength. I attacked fiercely, we nearly collided. It seemed to me that he was weakening. He gave up the fight, suffered the emotional breakdown I had been so close to just a while ago. He leveled his plane and headed straight towards the English coast. It was so sudden that I didn't shoot even though I had him in my sights. Maybe he's wounded, I thought.

The pilot was clever, though, he was flying so low that I couldn't take the aim, a smallest distraction could cause collision with the waves. I was too close, I had to decrease the throttle in order not to fly into him. I waited for him to pull up, that would make the shot possible.

The coast was growing. I kept my thumb on the firing button. A few dozen yards from the cliffs the Messerschmitt pulled up. At precisely the same moment I opened fire, laying short bursts directly on his plane. I could feel my aircraft being pushed back by the recoil of eight machine guns.

The Messerschmitt turned on its back, slammed into the water and exploded like a bomb. The explosion tossed my plane up, water and oil splashed on my windscreen."