Last year, an unknown company from the Czech republic named Illusion Softworks, delivered to us what seemed to be the most promising tactical squad shooter to that date. Hidden & Dangerous, their game, gave us just what we needed after seeing movies like "Saving private Ryan" and "The thin red line" : first person World War 2 infantry action. I remember running the two level demo for the first time, and being blown away by the rich atmosphere of the game. The first mission had your men standing on the bank of an Italian river in a rainy night, and I really felt that I was being there with them. The graphics, the weather effects, all was nicely done. However, my expectations were slightly let down, as the final version of the game proved to be very buggy. Nevertheless, I played the hell out of it and enjoyed every bit of it. Almost. 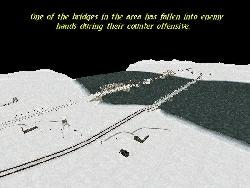 What we have here today is the first add-on produced for Hidden & Dangerous. You should note that I am reviewing Fight For Freedom, the European version, and not Devil's Bridge, the American one. I don't think it really maters. Normally one would expect Devil's Bridge to be an improved product over FFF, as it was released much later. As far as I can remember, the same delay existed in the case with of the original Hidden & Dangerous too, and the American version was just as broken as the European one.

The user interface has been left almost unchanged from the first H&D game, so everybody who has played that one will feel right at home. The only real difference that I could tell is in the soldiers selection screen, where the photos are now black and white. While this certainly adds to the WW2 spirit of the game, it also makes all the soldiers look the same to me. I had to be very careful when browsing the personnel files to select my team. 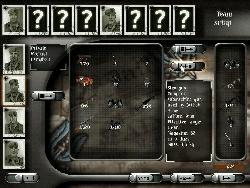