We received a preview copy of Starlancer yesterday, and we have our "first look" report ready for you.

Erin and Chris Roberts of "Wing Commander" and "Privateer" fame are developing Starlancer, and their company Digital Anvil also produced the Wing Commander feature film. Their abilities in this area are evident in the opening movie as well as the many cut-scenes, and there is over 25 minutes of full motion computer generated cinematics. We've been playing the single player campaign, and Part I of our preview will be an overview of Starlancer's features and our first impressions of the game. In Part II we'll be examining the multiplayer features, and we're looking forward to trying the 4-player co-operative campaign. 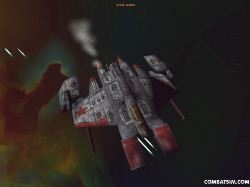 The first item of note is Starlancer's full installation size. Well the 1.2 gigs isn't the largest we've seen, it's pretty darn close, so for those of us with hard drive space issues there is a minimum install that is about 300 megs or so. There are quite a few sound and video options available, and one slider that must be cranked up is the brightness/gamma level: Starlancer is a very dark game. After the game is configured to the player's system limitations or lack thereof, a simple screen with single player, multi-player, and options selections presents itself. 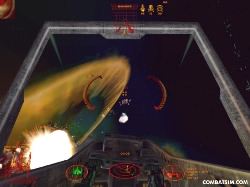 The storyline in Starlancer is set just far enough in the future that today's nations and alliances are still in existence in one form or another. The side the player plays on is called the "Alliance", and it is made up of nations that today are in NATO. Italy, France, Spain, the United Kingdom, the United States, Germany, and Japan make up the bulk of the Alliance forces. The Coalition is the enemy, and it is comprised of East-Bloc nations led by Russia. The roundels found on World War II fighters are added to the various fighters and capitol ships, and this as well as the crew of each ship and fleet having accents and names that correspond with their nation adds a very unique touch to Starlancer. The overall premise is World War III in space. The player joins a volunteer squadron that is a mix of veterans of various nationalities and rookies who have volunteered for duty. The coalition forces have recently ambushed the French and Italian fleets in a Pearl Harbor type operation, and the Alliance is on the defensive at the beginning of the game. 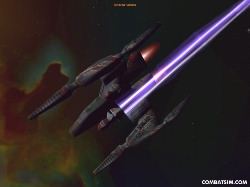 We've had a chance to fly through the first four missions in the single player campaign, and with the difficulty level cranked all the way up, we think that players won't blast their way through the 25 or so missions as quickly as some previous space combat simulators. There is a definite increase in enemy AI compared to past Wing Commander/Free Space/Privateer games, and this suits us just fine. We noticed the same level of intelligence in our wingman, and the communications system in Starlancer is quite in depth, with the ability to give specific orders to each different unit in your wing. There is also a display that can be brought up in the HUD that shows vital information such as battle damage for each of your wingmen. 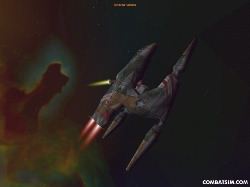