Back in October of 1999, Zombie and Ripcord teamed up to release Spec Ops 2: Green Berets, the successor to the Spec Ops title. As was noted in COMBATSIM's review of the game, it sadly fell short of not only the other tactical squad combat games on the market, but also the previous edition of the franchise. Without a doubt, the original Spec Ops (known as Rangers Lead the Way) offered some of the most ground-breaking play ever in a military tactical shooter, and it was appropriately praised for its innovation. Spec Ops 2, on the other hand, was a bit of a disappointment. Much of the innovation couldnt be transferred over again into the second title. Indeed, the AI was flawed, the graphics werent on par with the rest of the competition, and the gameplay was still lacking. 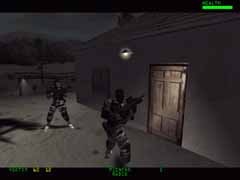 
Zombie and Ripcord have teamed up once again to produce Spec Ops 2: Operation Bravo, which is essentially the free expansion mission pack for SO2. Like the original formula they employed with Spec Ops: Ranger Team Bravo back in October of 1998, the design team has gone to the customers, listened to their complaints, and produced a sophisticated patch as well as offering twenty-five brand new missions and some new multiplayer game play modes. Furthermore, while the retail box (known as Platinum) will be available with all these enhancements, the patch can be downloaded for free.

In total, there are some seven files to be had, totaling just about sixty megs. The first two files (depending on your video card type) add the internal enhancements to the game. These include the new textures, enhanced AI, and new multiplayer modes. The five final files offer each of the new campaigns (boringly named Alpine, Desert, Jungle, Mountains, and Urban levels). Each of these campaigns includes five separate missions. With the new twenty-five missions from the ex-pack, Spec Ops 2 now offers some fifty-five total missions to explore. So what really happens when you do download a copy of this patch-slash-expansion pack? Read on as we find out what this patch truly entails.