PC News Vietcong Multiplayer Demo
Take 2 Interactive has released a playable demo of Vietcong, allowing you to try out their upcoming tactical shooter. This is a multiplayer-only demo that offers Death Match, Capture the Flag, and Protect the Pilot gameplay modes for up to 32 players on the Stream map. Download

Players will also be able to access real-time satellite data of their surroundings with unprecedented detail via the Map Computer. Using the device will enable players to assess the lay of the land, zoom in low to spot the enemy and enemy armaments, observe your teammates and objectives, and plan a tactical approach to victory.

The style of the multiplayer games reflects the stealth and tactical approach of the single-player game. Reconnaissance elements provide for a new style of FPS multiplayer gaming, blending stealth and surveillance with action and gunplay. Rather than solely relying on the small and tight, or open and empty, environments found in most multiplayer FPS titles.

IGI 2: Covert Strike is scheduled to be published by Codemasters in February 2003.

Movie Trailer: Blitzkrieg
In the next three weeks CDV Software will be presenting intro movies of the three campaigns from its upcoming RTS Blitzkrieg. The first features the allied campaign,with a mix between historical and rendered imagery. The movie is about 21MB in size and is now available for download.

G.I. Combat Patch v1.02e
Strategy First has released a new patch for G.I. Combat, updating the 3D war game by Freedom Games to version 1.02e. The list of changes is however identical to last week's v1.02d patch, and it's also not clear which previous version is required to install this patch. Download 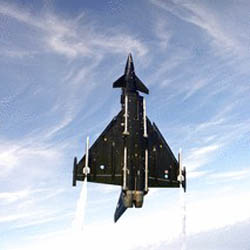 The investigation has been provided with significant evidence that has identified areas of probable cause and the actions required to address these. The exceptional effort made by Eurofighter and Eurojet to provide information and assistance to the Committee is noted.

Eurofighter Typhoon DA6 was fitted with two early development EJ200 engines (designated 03A standard). During a test flight in the Toledo region of Spain the aircraft was flying at 45,000 feet at a speed of Mach 0.7. While stabilising the aircraft to perform the test point both engines suffered a surge that resulted in a double engine flame out. The aircrew attempted to recover the situation but were unable to re-light the engines. Both crew ejected safely from the aircraft.

It is also noted that only one Eurofighter aircraft in the fleet is currently in use with these older engine standards. The engines are being removed and replaced with a later standard pending further investigation. The AIC established that subsequent engine models are not susceptible to similar effects. The remainder of the fleet operate later design standard engines.

The Committee recommend a return to flying for the remaining engine types as early as possible following National Airworthiness Authorisation and conditions.'

Eurofighter and Eurojet are working with the four nation authorities to facilitate a resumption of flight testing and clearances with immediate effect.

"These were the final tests for the Guided MLRS, and this transformational system has demonstrated exceptional maturity and effectiveness during testing," said Ron Abbott, vice president - Tactical Missiles for Lockheed Martin Missiles and Fire Control. "With the Guided MLRS, our forces will be able to deliver overwhelming amounts of indirect fire with maximum accuracy. Our customer, the U.S. Army, and our international partners are very happy with the exceptional results of these tests." 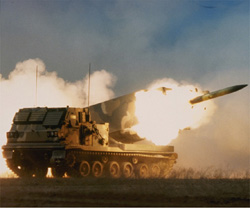 The GPS-aided, ripple-fired rockets were launched from an MLRS M270 Improved Position Determining System (IPDS) launcher. In both tests conducted December 12, the rockets flew more than 15 kilometers to the target area and dispensed their submunition payloads.

These PQT flights were the final step in the System Development and Demonstration (SDD) phase of the Guided MLRS Development. A Low Rate Initial Production (LRIP) contract is expected on the Guided MLRS program in 2003. Guided MLRS initial operational capability is currently scheduled for 2005. The Guided MLRS rocket program is an international cooperative program between the U.S., U.K., Italy, France and Germany.

Guided MLRS rockets provide the Army with a capability to quickly attack critical point targets with pinpoint accuracy. Because of the precision guidance of the rocket, collateral damage around the impact point is minimal. The Guided MLRS rocket is an Objective Force system that incorporates a GPS-aided inertial guidance package integrated on a product-improved rocket body. Small canards on the guided rocket nose will also provide basic maneuverability and enhance the accuracy of the system. In addition to the IPDS launcher, the Guided MLRS rocket can also be launched from the M270A1 launcher and the High Mobility Artillery Rocket System (HIMARS) launcher. Guided MLRS is the next major step in the evolution of the MLRS Family of Munitions, offering advanced capabilities, reduced logistics support and precision attack. The rocket will have a range of approximately 70+ kilometers.