CFS3 Add-on
Just Flight has announced that the first extra airfields for Combat Flight Simulator 3 are available now from the free downloads page The file is called: JFCFS301.exe and will automatically install and set up the following airfields in CFS3, Manston (Ramsgate UK), Interlaken (Switzerland), West Freugh (UK), Corte (Corsica).

Military News Electrical Failure Challenges U-2 Pilots' Skills
Flying above 70,000 feet in a two-seat U-2 Dragon Lady, the crew had less than 10 minutes to respond to an impending electrical systems failure, an emergency never before encountered in the aircraft.

So began the ordeal of Maj. Mike Means and Capt. Steve Rodriguez in September 2001. Ultimately, the flight would test their mettle as pilots and earn them the 12th Air Force Aircrew of Distinction Award for fiscal 2002.

Responding to emergencies is nothing new to U-2 pilots, who regularly prepare for the unexpected. 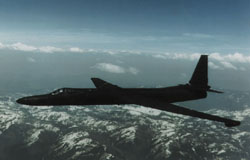 "We brief emergency procedures before every flight. The emergencies that we brief prior to each flight are situations that have occurred in the past," said Means, a U-2 instructor pilot with the 1st Reconnaissance Squadron. "Generally, there are standardized procedures to handle each one of these situations."

This time, however, no checklist existed to guide the crew to safety.

About four hours into their high-altitude training mission, Means and Rodriguez, an upgrade pilot, encountered an electrical malfunction that caused systems to fail one by one. Digital airspeed and altitude read-outs disappeared, followed by the loss of fuel quantity and gear position indicators, radios and navigation equipment. Even emergency backup systems were not immune.

Sensing an imminent electrical failure, the crew shut down all electrical equipment in an attempt to preserve emergency battery power. While the intercom still functioned, they quickly briefed air traffic controllers, and then turned off the battery.

With only a magnetic compass, Means successfully navigated back to Beale. The failed electrical system began to take its toll on the pilots as the lack of speed brakes and lift spoilers to increase drag demanded a 90-minute descent. Means had to fly the aircraft without the benefit of trim.

"The trim is used to lighten the stick forces that are placed on the flight controls (and) ... basically ease the pilot's workload," Means said. "When our problem occurred, we had a nose down trim situation which meant that we had a very heavy stick and the slower we got, the heavier the stick forces became."

The inability to dump fuel and reduce weight, and lower flaps to decrease speed, also compounded their difficulties.

"These factors caused us to fly a faster-than-normal landing and face a landing rollout that would exceed the length of Beale's runway," Means said.

Lining up on the runway's approach, the crew faced little or no margin of error.

As Means gathered his strength for the landing, Rodriguez, on only his second high-altitude sortie and unable to communicate with his instructor, ran all normal checklists to prepare for the emergency landing. This included manually lowering the landing gear, which relies on gravity and air pressure, to bring the wheels down. Again, the failed electrical system prevented the normal cockpit indications to confirm that the wheels were locked in position.

As the aircraft neared the runway, Rodriguez turned the battery back on. It was dead. Consequently, the aircrew had no intercom for the approach and landing, and no way to communicate with a chase car.

Means settled the aircraft onto the 12,000-foot runway and turned the engine off to help slow the aircraft and minimize the rollout distance. Finally, he dragged a wingtip on the runway to stop the aircraft.

Under normal circumstances, the U-2 is a challenging aircraft to fly and land. Through the pilot selection process, the 9th Reconnaissance Wing picks only the best pilots to fly the Dragon Lady. Pilots say landing the U-2 is like landing a truck on a tightrope. Means said this flight exponentially magnified that difficulty.

"When you find yourself in a situation that's not in the book, you have to rely on training, past experiences and your survival instincts," he said. "You do what it takes to make it happen or what I tell some of my students, 'just be a pilot.'"

In a brotherhood that gathers to swap "war stories," the term used to describe challenging sorties, U-2 pilots have another incident from which to learn.

Raytheon Receives Continues SEA RAM Development
Raytheon Company is being awarded a $6.7 million modification to an existing contract to continue development of the SEA RAM Weapon System in cooperation with the U.S. Navy. 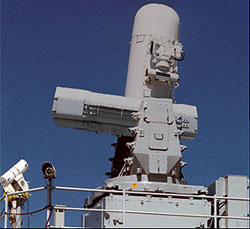 This system allows RAM to be an effective and affordable upgrade, integrating with the Phalanx weapon system and avoiding the costly combat system upgrade. At the same time, it provides the capability to integrate the sensor information into modern combat systems as Phalanx does today in the U.S. Navy. Intended to enlarge the keep-out range against sea-skimming, anti-ship missiles and defend against helicopter, aircraft and surface threats, SEA RAM utilizes Phalanx sensors with minor modifications made to the launcher allowing for the installation of an 11-round RAM missile guide.

In 2001 Raytheon provided the SEA RAM Weapon System to the United Kingdom's Royal Navy for suitability testing. Also in 2001 Raytheon, in conjunction with the U.S. Navy, successfully launched four blast test vehicles which measured launch forces and confirmed there were no rocket motor effects on SEA RAM's forward-looking infrared sensor.