Combat Mission: Barbarossa To Berlin v1.01
Battlefront.com has just released the 1.01 patch for Combat Mission: Barbarossa to Berlin. Sporting hundreds of enhancements, fan suggestions and over a dozen new vehicle models this v1.01 patch. Check Click here for the complete 1.01 Patch Readme for more details. Make sure you read the Readme before applying the patch. Download

Please note that this patch is for the US version only. For owners of the European version, CDV Software has released a European 1.01 patch, which can be found here.

Hyperlobby v2.10.170
New version of Hyperlobby is out. Click here for more information.

After taking off last Thursday from the dry lakebed at NASA-Dryden, X-45A vehicle No. 2 flew for approximately 30 minutes and reached an air speed of 195 knots and an altitude of 7,500 feet. This flight comes six months after the first flight of X-45A vehicle No. 1 on May 22. 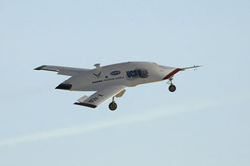 Toward this objective, the UCAV program successfully demonstrated in October a distributed, multi-vehicle control capability for the UCAV Mission Control Segment, or MCS. The demonstration, conducted at the Boeing Simulation Integration Laboratory in Seattle, showed how the MCS software allows a single operator to control more than one air vehicle in support of fixed target strikes and suppression of enemy air defense missions.

The Unmanned Combat Air Vehicle represents a revolutionary new weapon system that can significantly increase the effectiveness and survivability of manned fighter aircraft while lowering the overall cost of combat operations. In addition to the two X-45A UCAV demonstration vehicles, the UCAV program is also designing and building two more operationally representative prototypes that will demonstrate the military utility and operational value of the UCAV system.