This was a more stressing test of the system than in the previous interceptions, requiring missile launch during the target's ascent phase (prior to apogee). SM-3 successfully demonstrated aimpoint shift control and guidance during the test, by impacting the target as predicted. 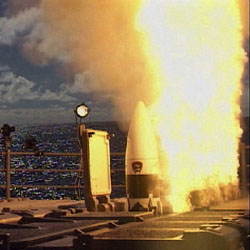 This test, designated Flight Mission-4 (FM-4), is the seventh consecutive successful missile defense test for Raytheon's sea-based and ground-based midcourse programs in the past 16 months, continuing to demonstrate Raytheon's "hit-to-kill" capabilities. In all, Raytheon systems have successfully intercepted eight targets in space. (See note to editors.)

With the two previous Aegis BMD test successes this year, MDA and the U.S. Navy have accelerated the fight test objectives of the Aegis BMD project. FM-4 marked the beginning of an ongoing flight test series that continues to move toward deployment as an element of the Ballistic Missile Defense system.

"Along with the U.S. Navy and the Missile Defense Agency, we are on track to develop this ship-based Aegis Ballistic Missile Defense system for deployment against short- to medium-range ballistic missile threats. The success of this test demonstrates that sea-based missile defense on a forward deployed ship with a high-velocity guided missile can defend large regions, on the order of 500,000 square miles, or almost twice the size of the state of Texas," said Edward Miyashiro, Raytheon's vice president for Surface Navy Air Defense Systems.

Air defense variants of STANDARD Missile are currently at sea in more than 50 Aegis cruisers and destroyers, with more than 25 additional ships in production or planned.