Designed to take players closer to the entire, gruelling war experience than any strategy game previously, World War II: RTS will capture both the tactics and the emotions of being a commander in WWII's key battles. The game has already attracted much attention for its historical detail and dramatic use of impressive visuals.

Over 100 missions will see the player in command of troops and units through historic WWII battles, played out on authentically represented battlefields and other locations, from the European theatre of World War II.

The game's key attraction is the realistic and personally intense detail in which the game portrays the 6-year war. World War II: RTS will accurately recreate hundreds of British, American, German, French, Soviet and other troops and units, complete with appropriate uniforms and weaponry.

"This is a real advancement in tactical wargaming," says Nikolay Baryshnikov, 1C's International Sales Director. "We're creating a game that's incredibly rich in content and historical authenticity. With a leading graphics engine to deliver incredible visuals, it's set to be the most detailed WWII military command simulation on PC." For more information on World War II: RTS, check out our interview with Nikolay Baryshnikov, 1C's International Sales Director.

iEn, Activision Sign Deal
Activision, Inc. and iEntertainment Network have inked a deal that will see a trio of iEntertainments games being distributed in the U.S. by Activision. Activision Value Publishing will be the exclusive purveyor of Dawn of Aces II, Air Combat and Armored Assault, all of which are due in stores by Christmas.

Blitzkrieg Update
This week CDV has sent us info on a very special unit from their upcoming strategy title, Blitzkrieg, the German tank called Maus. "This tank has never actually been used in action, but some prototypes alone were really breathtaking. An impression: weight of approximately 190 tons, height of 3,5 metres and a length of 10 metres make this tank a steel-monster. They might have never been used in action, but you got the chance to change history in that sense and use it in our upcoming title Blitzkrieg".

Sudden Strike 2 Patch v2.2
The latest Sudden Strike 2 patch is now available. The patch fixes problems with the Kyro graphics chips, eliminates some bugs in the editor and enhances the net code for better multiplayer action. The patch is a must have for every Sudden Strike 2 fan, and works for German, French and English versions of the game. Download

Military News Eurofighter Crash a Setback for Program
The four-nation programme to develop and field the Eurofighter strike aircraft suffered a significant setback today (21 November) when one of seven development aircraft (DA) supporting the effort was lost during an accident in Spain. The incident represents the first Eurofighter loss in the designs eight-plus years of flight-trial activities conducted to date.

The two-seat DA6 platform crashed near the central Spanish town of Toledo after taking off from Spanish airframe manufacturer EADS-CASAs Getafe facility near Madrid for a test flight. The aircrafts two crewmembers  the companys chief Eurofighter test pilot and a Spanish Air Force pilot  ejected safely. 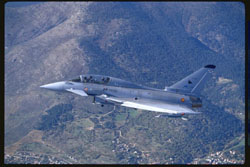 Eurofighter consortium spokesman Ian Bustin said "the cause of the accident would hopefully be determined within 24 hours of the crash, since vital flight-performance information was being passed to the Getafe facility via datalink during the ill-fated sortie. Early press reports, which quoted a Spanish Ministry of Defence official as saying the aircraft had suffered a double-engine failure at high altitude, were speculative, he added".

"The six remaining Eurofighter development aircraft and the programmes first three instrumented production aircraft  one each for Germany, Italy and the UK  were not scheduled to fly on 21 November, said Bustin. These will be grounded until the initial findings of the accident have been declared, with a fleet-wide grounding order likely if the Spanish crash is not considered to be a one-off incident".

While the Eurofighter organisation says it had a contingency plan in place to cover the loss of a DA-series aircraft, a grounding order could well threaten its chances of delivering the programmes first production aircraft before year-end.